Words for mushrooms and other fungi, Part 9

The prototypical mushroom has a round disk-like top with a slender stalk. The most common type of mushroom, the one most people associate with the word mushroom is the cultivated white button mushroom which is native to grasslands in Europe and North America and which is cultivated in many countries. Its botanical name is Agaricus bisporus, cf. Figure 3.[i] According to Wikipedia,

Agaricus bisporus is an edible basidiomycete mushroom native to grasslands in Europe and North America. It has two color states while immature – white and brown – both of which have various names, with additional names for the mature state. A. bisporus is cultivated in more than seventy countries and is one of the most commonly and widely consumed mushrooms in the world.[ii]

This mushroom goes by several common names in English, such as common mushroom, button mushroom, table mushroom, and champignon mushroom, or just simply champignon, (pronounced [ʧamˈpʰɪnɪən] or [ʃamˈpʰɪnɪən]). The name champignon, which is not common and is probably not known by most speakers of English, is cognate with the most common name for this type of mushroom in Spanish too, namely champiñón (pronounced [ʧampiˈɲon]). How these cognates are used differs a great deal, however. Thus, an average English speaker, at least one who is not an avid mushroom enthusiast, will refer to these mushrooms as just plain mushrooms, unless they were trying to differentiate from other varieties, whereas a Spanish speaker would always refer to them as champiñones, and not as hongos or setas.

The cognates Eng. champignon and Sp. champiñón are both loanwords from French champignon [ʃɑ̃piˈɲɔ̃], which is the generic word for ‘mushroom’ in Modern French. This word’s ultimate source is Vulgar Latin *campānĭŏlus ‘product of the field’, a word derived from Late Latin campānĕus/campānĕa (or campānĭus/campānĭa) ‘pertaining to fields’, itself derived from Latin campus ‘open or flat space; plain’, cf. Late Latin campānĭa ‘open country, battlefield’, source of Eng. campaign and Sp. campaña (and French campagne ‘countryside’ and champagne ‘champagne’).[1]

French champignon is first attested in 1398, presumably as a variant (by change of suffix) of Old French adjective champignuel (champineul, c. 1350; the adjective canpegneus is attested in the 12th century). O.Fr. champignuel descends from Vulgar Latin campaniolus, derived from the noun  campānĭa by means of the suffix ‑ŏlu. The adjective was used in the phrase fungus campaniolus ‘field mushroom’, from which the first part was removed, turning the adjective campaniolus into a noun. In other words, Fr. champignon (from an earlier champignuel) came to replace (in French) the original Latinate word for ‘mushroom’ that descended from Lat. fungus.

English borrowed the word champignon from French originally to refer to fungi or mushrooms in general, just like the original French word does, as a replacement of the word mushroom, at least in some varieties of English. The word is first attested in writing in the latter part of the 16th century. In the 18th century, however, the meaning of Eng. champignon became more restricted when it came to refer to edible mushrooms, and later it became restricted to some species of edible mushrooms. Dictionaries differ as to what that species is. the species Agaricus campestris a mushroom related to Agaricus bisporus, and other related varieties. According to the Oxford English Dictionary (OED) and the Oxford American Dictionary (OAD), the word champignon refers today to the botanical species Marasmius oreades, also known as Fairy Ring Agaric, (also known as field mushroom and in North America, as meadow mushroom. Other dictionaries, however, say the term champignon is less specific as to the species and point to Agaricus bisporus as the main type that goes by that name.[2] In Spanish, the word champiñón is a very recent loanword. It barely registers in the written record before 1925 and it does not appear in the Academy’s dictionary until 1928. It is only after 1950 that it truly becomes a common word in the written record.

The name champignon for this species of mushroom is reserved for its immature form, which is white and small. When it matures, the mushroom is brown and has a larger cap. When the mature mushroom reaches a size of 4-6” in diameter, it is marketed as portobello mushroom, sometimes spelled portabella or portobella, as the etymological source of the first part of this name is disputed.[iv] The name has been calqued into Spanish as hongo portobello, seta portobello, or even champiñón portobello. A portobello mushroom is 4"-6" in diameter. A young or juvenile portobello is sometimes known as a crimino mushroom (plural: crimini), but also as cremini, baby bellas, golden Italian mushrooms, and brown mushrooms, among other possibilities. The word cremini or crimini comes from Italian cremini, plural of cremino, a word derived from crema ‘cream’, usually referring to chocolate truffles or creamy morsels of cheese. 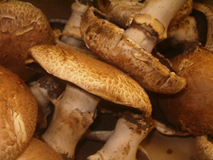 The ancestor of Fr. champignon with a final n is not attested. What is attested is Old French champigneul, with a final l, a cognate of Italian campignuolo, from an unattested Vulgar Latin *campinolius (OED).

In some northern French varieties from which modern standard French derives, the Latin C, pronounced [k], came to be pronounced [ʧ] and eventually to be written 〈ch〉 (later, the sound changed to [ʃ] in French, but not in English or Spanish).

As we saw, French has the doublet campagne and champagne. The latter is obviously native to the variety of French from which Standard French derives, since it has the expected ch sound change. The source of campagne is most likely a northern variety of French, such as Norman or Picard, in which the sound change in question did not take place.

[2] The American Heritage Dictionary defines champignon as ‘an edible mushroom, especially the much cultivated species Agaricus bisporus’ (AHD). The, on the other hand, defines the word as ‘a small edible mushroom with a light brown cap, growing in short grass in both Eurasia and North America and widely grown commercially. Also called meadow mushroom, field mushroom. Agaricus campestris, family Agaricaceae, class Basidiomycetes’ (OAD). The OED’s definition is the following: ‘A name applied originally (as in French) to fungi, or mushrooms generally; in 18th cent. to edible mushrooms, esp. Agaricus campestris; but, subsequently, restricted to the Fairy Ring Agaric (A. Oreades)’.