Words for mushrooms and other fungi, Part 8

In Spanish, the word hongo, the cognate of Eng. fungus (see above), which can be used with the generic meaning ‘fungus’, is used regularly to refer to mushrooms, whether they are edible (Sp. hongos comestibles) or not (Sp. hongos venenosos).[i] In some varieties of Spanish, however, the word seta is perhaps more common for at least the edible sense of the word hongo, though it can be applied to non-edible (poisonous) mushrooms as well.

So, both words seta and hongo can be used to refer to edible mushrooms in Spanish, though different varieties of Spanish may prefer one term over the other. If we search setas comestibles ‘edible mushrooms’ in Google we get about a quarter million hits and if we search hongos comestibles ‘edible mushrooms’ we get a few more, about 425,000. If you search for hongos comestibles in Google Books, you get about 24,100 results and if you search for setas comestibles, you get about 9,200 results, which suggests that there is a preference for hongo over seta among both experts and non experts. But there is no doubt that some experts in the study of mushrooms prefer the word seta, at least in some varieties of Spanish. In their entry for the word hongo, DCEH explains that the two words, hongo and seta, are synonymous in most varieties of Spanish, though in some, hongo may be preferred for the edible variety, in particular the variety Lactarius deliciosus, also known in Spanish as mízcalo,​ níscalo, robellón, or rebollón (cf. Engl. saffron milk cap or red pine mushroom).[1] 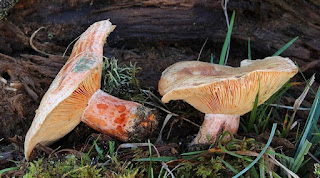 According to DCEH, the word seta is most likely of pre-Roman origin since it is not found in any other Romance language besides Spanish. There is another theory, although not a very likely one, namely that seta came from Ancient Greek σηπτά (septá) ‘rotten things’, neuter plural wordform of σηπτóς (septós), from which would the sense ‘mold, mildew, moss, slime’ could have derived and, from there, the sense of ‘low quality mushroom’ and, further, ‘mushroom in general’ (DCEH).

In the Spanish of the Andean countries of Bolivia, Chile, Ecuador y Perú, the common local word for ‘mushroom’ is callampa, a loanword from Quechua k’allampa or ccallampa (the latter spelling found in the DLE as the source of Sp. callampa). The word callampa is found in the DLE, the language academies’ dictionary. This dictionary tells us as well that Sp. callampa is also a vulgar word for ‘penis’ in Bolivia and Chile, among other things.

In Spanish, the word boleto is used for some types of mushrooms, though it is not a regular word for mushroom, unlike in Catalan, where the word bolet is the ‘the general word for mushrooms’, though ‘it tends to refer to wild mushrooms’, whereas xampinyó (cognate of Sp. champiñón) refers to ‘the standard mushrooms you buy in the supermarket’.[iii] Most Spanish dictionaries do not even mention this sense for the word boleto or the existence of a second word boleto in addition to the one that means ‘ticket for a show or seat’ or ‘coupon’, depending on the dialect. (One that does is Clave, which incorrectly treats it as a single word, not two separate words.) That word boleto is derived from the word boleta ‘ticket’ (in American Spanish), which is a loanword from Italian bolletta ‘safe-conduct’, a diminutive of bolla ‘seal’. The word boleto for mushrooms has a different, unrelated source, however. It is a loan from Lat. bōlētus ‘mushroom’, and in particular the highly valued porcine variety (see below), which itself is a loan from Ancient Greek βωλίτης (bōlitēs) ‘mushroom (especially Agaricus bisporus)’ (see below), a word of unknown origin. In botany, the Latin word bōlētus has been adopted for ‘a large genus of fungi, having the under surface of the pileus full of pores, instead of gills as in Agaricus’ (OED), which is the sense that Clave gives for this sense of Sp. boleto.[2]  Other languages have borrowed this word to refer to mushrooms of this genus, among them Eng. boletus or bolet, Fr. bolet, Sp. boleto, though these words are rather technical and rare. Another language besides Catalan in which a descendant of Lat. bōlētus is a generic word for ‘mushroom’ is German, which early on borrowed it from Latin, changing over time to the Modern German word Pilz (cf. Old High German buliz).

Speakers of some varieties of Spanish who are not well versed in mushrooms and their nomenclature and varieties often use a different word for mushrooms in general, at least for those in their common experience, a word that comes from French champignon and which is the regular word for mushroom in Modern French, though in theory Sp. champiñón refers to a particular type of mushroom. The word is champiñón in Spanish, which is cognate with Eng. champignon. We turn to these words next.

[2] Clave gives the following as an additional (unrelated) sense for the well-known word boleto: ‘mushroom that is characterized by having pores in the lower part of its cap and a thick foot, and that is edible or poisonous depending on the species’. The original says: ‘Seta que se caracteriza por tener poros en la parte baja de su sombrerillo y un pie grueso, y que es comestible o venenosa según la especie’ (Clave).