Words for mushrooms and other fungi, Part 7

As we saw in the preceding section, the English word mushroom, pronounced [ˈmʌʃ.ɹum] or [ˈmʌʃ.ɹʊm], refers to ‘a spore-producing fungal growth, often edible and typically having a domed cap with gills on the underside’ (COED). So, a mushroom is a type of fungus and, in particular, the part of a fungus that grows in plain sight, as opposed to the part that is hidden underground, the mycelium.

The word mushroom is a loanword from Anglo-Norman moscheron or musherum into Middle English, first attested in writing in the early 15th century. It seems to come from Old French mousseron, and eventually from ‘an unattested post-classical Latin’ mussariōn- (nominative musarĭō), of unknown origin. In Middle English it was also spelled musheron and many other different ways. French still has the word mousseron, also known as mousseron vrai ‘true mushroom’ or mousseron de Saint-Georges ‘Saint George’s mushroom’, a type of mushroom known in English also as St. George’s mushroom, so called because by this saint’s day, March 23, this mushroom can typically be found in this part of the world. Its botanical name is Calocybe gambosa, also known as Tricholoma georgii.[i] In modern French, however, the word mousseron is not used any longer to refer to mushrooms in general, for which the word champignon is now used instead (see below). In north-central Spain, this mushroom is much appreciated, and it is known as lansarón, nansarón, seta de San Jorge, or seta de primavera.[1]

Curiously, Spanish has a cognate of Eng. mushroom and Fr. mousseron, namely the botanical term mucerón, which is used in parts of Spain, though it seems to refer to different species of mushrooms in different places, among them the seta de San Jorge ‘Saint George’s mushroom’, also known as mucerón de primavera. Another species that the name mucerón is used for is one that has the botanical name Clitopilus prunulus, also known as mojardón, molinera, panadera, and harinera.[ii] In English, this mushroom is known as the miller or the sweetbread mushroom. You will not find these words in a regular Spanish dictionary, but you will in a mycological one.

Another word in English for mushroom is toadstool [ˈtʰoʊdˌstuɫ], first attested in the late 14th century (OED). This word is a transparent compound formed by the nouns toad (Sp. sapo) and stool (Sp. taburete, banqueta). The word toadstool is used today primarily for the round-top, prototypical type of mushroom and, in some varieties of English at least, it is used to refer to poisonous mushrooms while keeping the name mushroom is reserved for the edible ones. 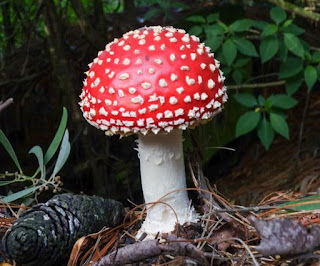 [1] In Basque, it is known as perretxiko, a word that is also used in the Spanish of the Basque Country.