Words for mushrooms and other fungi, Part 6

Mushrooms are a delicacy for many people, more so in some cultures than others. We’re referring here to edible mushrooms, of course, since there are other types as well, in particular poisonous, medicinal, and psychotropic ones. A mushroom is basically the above-ground reproductive structure or ‘fruiting body’ (Sp. cuerpo fructífero) of fungi from the phylum Basidiomycota, which along with the phylum Ascomycota (sac fungi or ascomycetes) form the subkingdom Dikarya (‘higher fungi’) of the kingdom Fungi. Besides mushrooms, the phylum Basidiomycota contains other organisms, such as Cryptococcus, a genus of yeastlike fungus that includes some serious pathogens for humans.[1]

In other words, a mushroom is the part of a type of fungus that protrudes from its underground ‘network of fine white filaments’ known as mycelium [maɪ̯.ˈsiɫ.i.əm] (Sp. micelio).[2] As we just said, mushrooms can be used as a food, though some varieties are poisonous and even deadly.[i] A mushroom can be defined technically as ‘a spore-producing fungal growth, often edible and typically having a domed cap with gills on the underside’ (COED). Mushrooms can be of the saprotrophic type, which feed on decaying organic matter, or mycorrhizal, which have symbiotic association with plants, such as trees (see above).

In Figure 2 below, you can see a very common edible fungus (mushroom) commonly found in woodlands in Europe and North America, known popularly as clouded agaric or cloud funnel, whose botanical name is Clitocybe nebularis. There are about 300 species of the genus Clitocybe and many of them are poisonous. Unfortunately, it is not easy to discern whether a species of this genus is edible or not without a microscope. Clitocybe nebularis is considered edible by some, but others complain of gastric discomfort when they eat them.[ii] 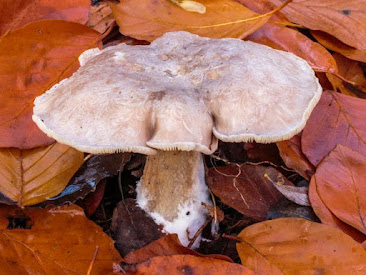 There are more than 10,000 species of mushrooms. They can be divided into different types according to how they are used by humans. Most mushrooms are edible, but there are also poisonous ones as well as ‘magic’ ones, the least common, with hallucinogenic or mind-altering properties. Poisonous mushrooms have different degrees of toxicity to humans, causing from minor gastrointestinal discomfort to death. What makes a mushroom poisonous is toxins that the mushroom produces to defend itself, to prevent it from being eaten. Some mushrooms, however, want to be eaten for that is how their spores are spread by the animals who eat them, in their feces.

Many poisonous mushrooms look very similar to edible ones, which calls for caution when collecting wild mushrooms in the forest. Even among the harmless (non-poisonous) ones, many are not really fit for consumption because they may be too bitter, too tough, or too slimy. Mushrooms have also been used throughout time in folk medicine, the so-called medicinal mushrooms (Sp. hongos/setas medicinales), though there is little scientific evidence that such a thing exists. Finally, mushrooms can also be classified as to whether they are wild (Sp. hongos/setas silvestres) and found in the forests of the world, which are the vast majority of mushrooms, or whether they are cultivated varieties (Sp. hongos cultivados/setas cultivadas), which are the ones that we find in stores and are thus the most often consumed ones.[iv] Collecting wild mushrooms is popular in many places. The activity goes by the name of mushroom hunting, mushrooming, mushroom picking, mushroom foraging (Sp. recolección de setas, recogida de setas, búsqueda de setas).[v]

Again, the word mushroom refers most generally to ‘any of various fungi that produce a fleshy fruiting body, especially one consisting of a stalk with an umbrella-shaped cap’, though it is most commonly used to refer to the visible part of such fungi, that is, to ‘the usually aboveground fruiting body of any of such fungi’ (AHD). Such a ‘fruiting body’ typically consists of three parts: the cap (pileus),[vi] the stem (stipe) that supports the cap,[viii] and the gills (lamellae, sing. lamella [ləˈmɛlə]) on the underside of the cap which release the spores or reproductive particles. The Spanish names for these parts are: (1) sombrero (or sombrerillo​; píleo), (2) pie or pedicelo (estípite), and (3) láminas, laminillas, agallas, or lamelas, which release the esporas ‘spores’. As we can see, the technical terms are cognate in the two languages:

·   Eng. pileus ~ Sp. píleo: from Lat. pillĕus ‘a felt cap or hat, made to fit close, and shaped like the half of an egg. It was worn by the Romans at entertainments and festivals, esp. at the Saturnalia, and was given to a slave at his enfranchisement as a sign of freedom (cf. petasus)’ (L&S), related to Latin pilus ‘a hair’

For an excellent introduction to mushrooms, see https://www.youtube.com/watch?v=9tqKQ1GrEy4

[2] The word mycelium is a New (Scientific) Latin word derived from the root of the Ancient Greek word μύκης (múkēs) ‘mushroom’ and the Latin suffix ‑ĭum, with a strange ‘linking’ ‑l‑ in between.