One of the most popular and abundant wild mushrooms to eat are the chanterelle mushrooms of which there are many species and varieties. They are found in in Eurasia, North and Central America and Africa. They go by the generic name chanterelle (mushroom) in English, pronounced [ˈʧæntəɹɛɫ] or [ˌʃɒntəˈɹɛɫ].[i] In Spanish, this type of mushroom is known primarily as rebozuelo, but also as anacate or chantarela.[ii] Mushroom hunters must be careful since there are poisonous look-alikes, such as the jack-o’-lantern mushroom (Omphalotus olearius). Originally, all the known chanterelles were all assigned to the genus Cantharellus but they are now seen as species from at least four different genera that happen to share external similarities: Cantharellus, Craterellus, Gomphus, and Polyozellus.

Perhaps the most common or well-known type of chanterelle are the highly-prized yellow chanterelle or golden chanterelle, whose botanical name is Cantharellus cibarius. Another common name for this mushroom is girolle or girole, pronounced [ʤəˈɹoʊ̯ɫ], which is a late 19th century loan from French, which was first attested in 1513 in Middle French and which may come ultimately from classical Lat. gyrus ‘circle, circuit, career’, alluding ‘to the shape of its cap’ to which a diminutive suffix was added (‑olle/‑ole) (OED).

At least five species of the Craterellus genus are also known as chanterelles. One of the better known ones is the black trumpet mushroom, also known as horn of plenty, black chanterelle, or trumpet of the dead. Two related species are lumped together under the name black trumpet: Craterellus cornucopioides in Europe and Craterellus fallax in Eastern North America. Its most common Spanish names are trompeta de los muertos ‘trumpet of the dead’, cuerno de la abundancia ‘horn of plenty’, and trufa del pobre ‘poor man’s truffle’.[iv] As you can see in Figure 13, there is no clear separation between the stem and the cap of this mushroom. Rather, the mushroom is shaped as a funnel or like a trumpet. It is found in woods in Europe, North America, and East Asia, mostly in moist areas in the shade under under beech and oak trees. 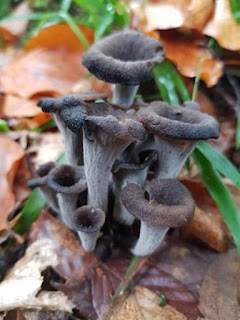 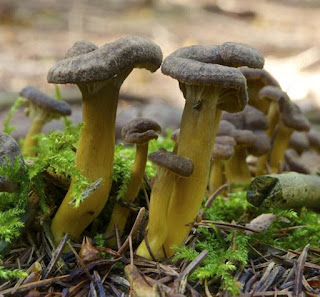 The genus name Cantharellus is a New Latin word derived from Lat. canthărus ‘a large, wide-bellied drinking-vessel with handles, a tankard, pot’ by means of the Latin diminutive suffix ‑ell‑us. Lat. canthărus is a loanword from Ancient Greek κάνθαρος (kántharos) ‘drinking cup or vessel, chalice’ and the source of Sp. cántaro for a large usually clay vessel, with a narrow mouth, wide belly, and narrow foot, usually with one or two handles. Note that English has borrowed cantharus or kantharos to refer to ‘a large, two-handled drinking-cup’ of classical times (OED). The name chanterelle is the French version of the New Latin name, first attested with this sense in 1752, though there are other, unrelated, earlier words chanterelle in French related to the word chant ‘song, etc.’ and chanter ‘to sing’ (cf. Sp, canto, cantar). The Spanish analog would be cantarito ‘small cántaro’, which happens to be the name of a Mexican cocktail made with tequila and fresh citrus juice and typically served in a clay glass.