Words for mushrooms and other fungi, Part 16

This is a saprotrophic mushroom native to East Asia, a region that comprises China, Japan, Mongolia, and Korea, but which is cultivated in most temperate climates today. It grows in bunches, which have a long stem and a small cap, which may be brown or white. Its botanical name is Hypsizygus tesselatus.[i] In the past, two other botanical names that have been used for this species of mushroom, namely Hypsizygus marmoreus and Pleurotus elongatipes, which have been superseded by the new name that is considered more correct. Since they typically grow on beech trees, their most common name in English is beech mushroom, though clamshell mushroom is another common name. In Spanish, it is often called by a calque of the name beech mushroom, namely seta de haya ‘beech mushroom’. 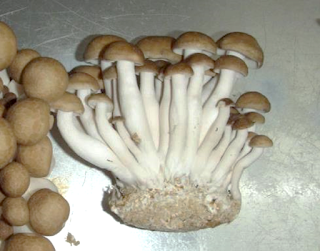 There are two varieties of the beech mushroom species, brown and white, the latter having been developed from the former in recent times artificially in Japan. These mushrooms sometimes go by their Japanese names in both English and Spanish: buna-shimeji (ブナシメジ) for the brown one and bunapi-shimeji (ブナピー) for the white one. The Japanese word shimeji (シメジ, 占地, 湿地, or しめじ) refers to ‘any of a group of edible mushrooms used in Japanese cookery’ (Wiktionary).[iii] There are 6 types of shimeji mushroom in Japan. Besides the two just mentioned, the remaining four are hon-shimeji (ホンシメジ), Lyophyllum shimeji; hatake-shimeji (ハタケシメジ), Lyophyllum decastes; shirotamogidake (シロタモギダケ), Hypsizygus ulmarius; and Velvet pioppino (alias velvet pioppini, black poplar mushroom, in Chinese: 茶樹菇/茶树菇), Agrocybe aegerita.  In Chinese, the name for the beech mushroom is 鴻喜菇 (hóngxǐgū) or 真姬菇 (zhēnjīgū). 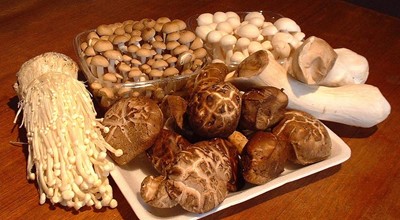 As for the origin of the botanical name for this species, the genus name Hypsizygus it is a New Latin word formed from two Greek roots: (1) hypsi‑ ‘aloft, on high’ (cf. Ancient Greek ὕψι (húpsi) ‘aloft, on high, on the high seas’, which is probably related to ὑπέρ (hupér) ‘above’, source of Eng. hyper‑ and cognate with Lat. super); and (2) zygus from the root of the noun ζυγόν (zugón) ‘yoke’ (Hypsi‑zyg‑us). This name refers to the place where the mushroom is typically attached to its host tree. As for the species appellative tesselatus, it comes from Lat. tessellātus (two l’s) ‘of small square stones’, passive participle of the verb tessellare, derived from tessella ‘small cube’, a diminutive of tessera ‘a square, a cube, a die with numbers on all six sides’, a loanword from Ancient Greek τέσσαρες (téssares) ‘four’.[1] Another well-known species of this genus is Hypsizygus ulmarius, the elm oyster mushroom.

[1] Note that English has borrowed the noun tessera and the verb tessellate or tesselate (US). The noun tessera means ‘a small block of stone, tile, etc. used in a mosaic’ or ‘(in ancient Greece and Rome) a small tablet of wood or bone used as a token’ (COED). The verb tessel(l)ate means ‘decorate (a floor) with mosaics’ or ‘Mathematics cover (a plane surface) by repeated use of a single shape, without gaps or overlapping’ (COED).