Words for mushrooms and other fungi, Part 15

Another popular edible mushroom is one whose most recent botanical name is Flammulina filiformis, though earlier it was seen as the variant filiformis of the species Flammulina velutipes (F. velutipes var. filiformis).[i] One dictionary defines this species as ‘an edible agaric that is available in early spring or late fall when few other mushrooms are; has a viscid smooth orange to brown cap and a velvety stalk that turns black in maturity and pallid gills; often occur in clusters’ (WordNet). Flammulina velutipes grows wildly on the stumps of a variety of trees, such as the Chinese hackberry tree, but also the ash, mulberry, and persimmon trees. The wild and the cultivated types of the mushroom can be quite different in appearance. 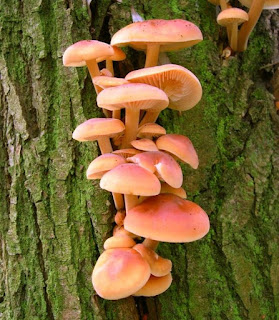 This mushroom’s Japanese name is enokitake (榎茸 or エノキタケ), which is also used in English, along with its short form enoki (榎 or えのき), the name of the Chinese hackberry tree (Celtis sinensis), to which the Japanese word take (茸) ‘mushroom’ is added (see above). The word enoki is itself a compound of 榎 (e) ‘Chinese hackberry’ +‎ の (no) ‘of’ +‎ 木 (ki) ‘tree’. Two other common English names for this mushroom are velvet shank and winter mushroom. In Spanish, this mushroom is also known by its Japanese abbreviated name enoki or by the name seta de aguja de oro, a calque of its Chinese name jīnzhēngū (金針菇) that literally means ‘gold needle mushroom’, cf. 金針 (kinshin) ‘gold needle (used in acupuncture)’ and 菇 (gū) ‘mushroom’. 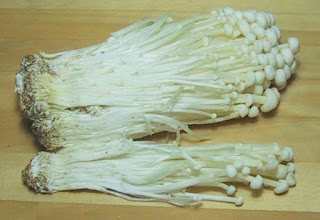 The genus name Flammulina is a New Latin word, oddly form as so many other such words that we have seen, derived from the Latin word flamma ‘flame, fire’, source of the cognates Eng. flame and Sp. llama. The form flammulina was meant as a diminutive of flamma and it was motivated by the color of mushrooms of this genus. As for the species epithet fīlĭfōrmis that follows the genus name in the biological binomial nomenclature, it is also a New Latin third-declension adjective that means something like ‘threadlike’ since it is formed by the root fīl‑ of the word fīlum ‘thread’ (cf. Sp. hilo ‘thread’, a patrimonial word) and the root fōrm‑ or the word fōrma ‘form, shape’ (fīl‑ĭ‑form‑is).[1] Lat. filifōrmis is the masculine and feminine nominative wordform of the adjective, whereas the neuter form is filifōrme. From this comes the learned Spanish adjective filiforme ‘threadlike, spindly’, cf. the English adjective in biology filiform ‘thread-like’, first attested in mid-18th century.

[1] As for the epithet velutipes, it is a New Latin word related to the New Latin word velūtīnus, derived by means of the suffix ‑in‑us (cf. Eng. ine, Sp. ino) from Medieval Latin velūtum ‘velvet’, which perhaps comes ultimately from Vulgar Latin *villūtus, which ultimately comes from the Latin noun vellus ‘fleece’ (cf. Sp. vello ‘down; (body) hair’). The reason for the name is the velvety stipe (cf. https://www.wordsense.eu/velutinus).