Words for mushrooms and other fungi, Part 14

Our next mushroom also belongs to the genus Pleurotus as the oyster mushroom (see above). The two of them are closely related, although they look rather different. Its botanical name is Pleurotus eryngii and it is popularly known by a variety of names, including king oyster mushroom, king trumpet mushroom, and French horn mushroom, the latter names due, no doubt, to its shape.[i] In Spanish, this mushroom is known as seta de cardo, literally ‘thistle mushroom’.[ii] It is very common in Spain, where it is greatly prized and used in its cuisine. 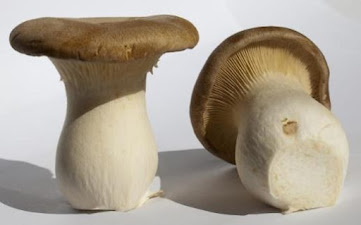 Species of the genus Pleurotus primarily feed on decaying wood but the Pleurotus eryngii complex can also be parasitical on the roots of herbaceous plants and, like Pleurotus ostreatus, it may be cultivated on organic wastes. Actually, Pleurotus eryngii is considered to be a ‘species complex’, that is, ‘a group of closely related organisms that are so similar in appearance that the boundaries between them are often unclear’ (WP).[iv] The different varieties are associated with different plants that they feed on. The one that was first described by botanists is Pleurotus eryngii var. eryngii (1872), which is associated with plants of the Eryngium genus, which are ‘annual and perennial herbs with hairless and usually spiny leaves’ (WP), such as Eryngium campestre.[v] 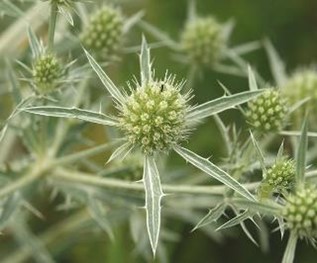 There are some 250 plant species of the genus Eryngium, and common English names include (field) eryngo (for Eryngium campestre) and (sea) eryngo or sea holly (for Eryngium maritimum; note that these plants are unrelated to true hollies, which belong to the genus Ilex. The eryngos are not true thistles but they are often confused with them because of their similar appearance and habitats. Spanish names for these plants, especially for Eryngium campestre, are cardo corredor and cardo setero, using the word meaning ‘thistle’.

The word thistle also refers to plants from different genera. One dictionary defines it as ‘any of numerous often weedy plants of several genera of the composite family, including Cirsium, Carduus, and Onopordum, having prickly leaves and floral bracts’ (AHD). An example of a thistle plant is milk thistle, whose botanical name is Silybum marianum (Sp. cardo mariano, among other names). As you can see, Spanish uses the word cardo both for true thistles and for the similar eryngos, which explains the most common name for this mushroom in this language, seta de cardo ‘thistle mushroom’.[1]

We already explained the meaning of the genus name Pleurotus in the preceding section. As for the epithet eryngii, it is the genitive singular of Lat. ēryngĭon (also ēryngē) for a thistle-like plant, possibly either the eryngo or the ‘spotted yellow thistle’ (Scolymus maculatus) (L&S). This Latin word is a loanword from Ancient Greek ἠρύγγιον (ērúngion) (also ἠρύγγη ērúngē), of uncertain origin. The OED claims that Greek ἠρύγγιον is the diminutive of ἤρυγγος (ḗrungos), supposedly ‘the name of this plant, also a goat's beard’ (OED), a word that is probably of pre-Greek origin, though some have tried to relate it to the word ἔαρ (éar) ‘spring’. The related word Eryngium for the genus of the plants that these mushrooms are associated with is a New Latin term derived from Lat. ēryngĭon.

Eng. eryngo was borrowed from Lat. eryngion in the late 16th century, first for ‘the candied root of the Sea Holly (Eryngium maritimum), formerly used as a sweetmeat, and regarded as an aphrodisiac’ (OED), a meaning that is now obsolete. Later, Eng. eryngo came to be used for ‘the plant itself, or any other of the same genus’ (OED). If Spanish ever borrowed this Latin word, it would have been as eringio, but there doesn’t seem to be any evidence that it is currently in use, despite the OED’s claim that it exists.

[1] Sp. cardo comes from Lat. cardŭus ‘the thistle, wild thistle’ (L&S). The word cardo is used informally to refer to an ugly person, or a surly person (‘persona arisca’, DLE).