Words for mushrooms and other fungi, Part 13

Species of the Pleurotus genus of gilled mushrooms are among the most cultivated mushrooms in the world, as they are much appreciated for cooking, especially in Japanese, Korean and Chinese cuisine, where they are considered a delicacy, but also in other parts of the world. They are saprotrophic mushrooms found wild growing on trees in temperate and subtropical forests around the world. They are characterized by an offset cap, not centered on the stem or stipe, if there is even one, which is what the name Pleurotus refers to in Latin (see below). 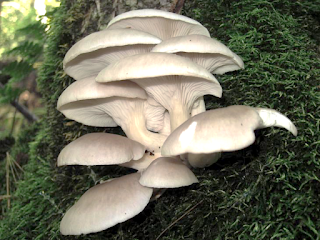 There are several dozen species in this genus.[ii] Some of the better known species, in particular the species Pleurotus ostreatus, go by the names oyster mushroom, abalone mushroom, or tree mushroom in English.[iii] The reference to oysters (and abalone) is no doubt due to their shape, which varies somewhat from species to species. The reference to trees is because these mushrooms grow on the sides of trees, not on the ground. 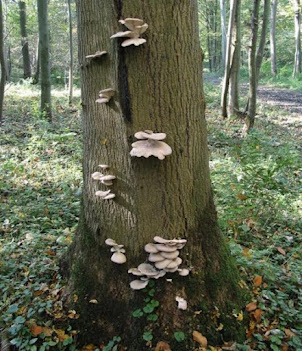 Figure 12: Oyster mushrooms on a tree[iv]

The species Pleurotus ostreatus of this genus, found in North America and northern Eurasia, is perhaps the best known species of the Pleurotus genus. Its most common name in English is oyster mushroom, but also pearl oyster mushroom. Some also know it by its Japanese name, hiratake (ひらたけ).[vi] In Chinese, it is known as 平菇 (pínggū) which means literally ‘flat mushroom’. Another common member of this genus is P. pulmonarius, which is found in North America, Eurasia, and Australasia and is known as phoenix or Indian oyster mushroom. Another well-known species is P. eryngii, known as king oyster mushroom, found in Europe and the Middle East, which we will discuss separately in the next section. 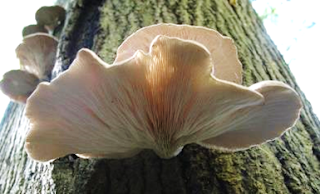 The name of the taxonomic genus these mushrooms belong to, Pleurotus, is a New Latin word, created by scientists, and related to the name of the family this genus belongs to, namely Pleurotaceae. These words were created from two Ancient Greek roots, the one of the nouns πλευρά (pleura) ‘side’ and ὠτός (ōtós), genitive form of οὖς (oûs) ‘ear’, making allusion to the fact that the cap of these mushrooms is not centered on the stipe but is somewhat off, or sometimes there seems to be no stipe and the cap grows directly off the tree. The appellative ostreatus of the species name means something like ‘oystered’ is derived from the Latin (first declension, feminine) noun ostrea ‘oyster, mussel’, a loanword from Ancient Greek ὄστρεον (óstreon), by means of the Latin suffix ‑ātus which, among other things, derives adjectives from nouns (see above).[2] And, indeed, the shape of some of these mushrooms reminds one of the shape of oysters.

[2] Sp. ostra seems to be a late 16th century loanword from Portuguese. The original Spanish words were ostria or ostia (the loss of the r presumably due to the influence of hostia ‘host, Eucharistic wafer’, DCEH), cf. Fr. huître, It. òstrica, and Gall. ostria. The word for ‘oyster’ in some varieties of Spanish, such as Andalucía and Cuba, derive from the original Spanish word in the augmentative ostión.

Ancient Greek ὄστρεον (óstreon) is thought to be related somehow to Ancient Greek ὀστέον (ostéon) ‘bone’. This word is found in the medical word osteoporosis in English and Spanish, a compound that also contains Greek πώρωσις (pṓrōsis) ‘petrification, callousness’, from Greek πῶρος (pôros) ‘tuff, a porous type of rock’.