Words for mushrooms and other fungi, Part 12

Chicken of the woods is the popular name for a polypore mushroom (like the maitake) with a bright orange color found all over the world. Other popular names for these mushrooms in English are sulphur shelf, chicken mushroom, or chicken fungus. The reference to chickens is due to its taste and texture, not its appearance. 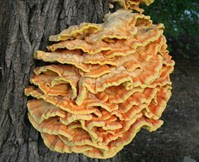 These names refer to not just a single species but to a whole genus of parasitic mushrooms—comprising some 18 species—whose botanical name is Laetiporus. Some of the best known species of this genus are Laetiporus sulphureus and Laetiporus cincinnatus.[ii] Spanish names to refer to this mushroom are calques of its English names, such as pollo del bosque ‘chicken of the woods/forest’, cangrejo de los bosques ‘crab of the forests’, and plataforma de azufre ‘sulphur platform’.

The genus name Laetiporus was coined by American mycologist William Murrill in 1904. It is a New Latin ‘word’ derived from the root laet‑ of the adjective laetus/a that meant both ‘happy, cheerful, glad’ and ‘fertile, luxuriant, lush, rich’ and the word pŏrus (see above). The epithet sulphureus means ‘sulphurous (containing sulphur)’, which refers to its yellow color. The epithet cincinnatus is a real Latin word, an adjective that means ‘with curled hair, having locks or ringlets of hair (as an indication of luxurious effeminacy)’ (L&S), which clearly refers to the shape of the brackets or shelves of these mushrooms.[1]

[1] The Latin adjective cincinnātus is also indirectly the source of the name of the city Cincinnati in Ohio and 5 other places (in Arkansas, Indiana (2), Iowa, and Missouri). They were named after a 5th-century BCE Roman hero, Lucius Quinctius Cincinnatus, ‘a Roman patrician, statesman, and military leader of the early Roman Republic who became a legendary figure of Roman virtue—particularly civic virtue—by the time of the late Republic’ (Wikipedia). Cincinnatus was his cognomen or family name, which was often in origin a nickname, as in this case. The word is formed from the noun cincinnus ‘lock of curly hair’ and the adjective-forming suffix ‑ātus. The noun cincinnus was presumably a loan from Ancient Greek κῐ́κῐννος (kíkinnos), with the same meaning. English has borrowed the word cincinnus as a technical term in botany.