Words for mushrooms and other fungi, Part 11

Maitake is another common mushroom with a Japanese name. The word maitake is not found in as many dictionaries as the word shiitake. The American Heritage Dictionary, which is an exception, defines it as ‘an edible polypore mushroom… that produces large clusters of overlapping gray or brown fan-shaped caps, grows at the base of trees or in cultivation, and is prized in Japanese cuisine and used as a dietary supplement’ (AHD). A polypore is a bracket or shelf fungus that expels its spores through fine tubes or pores on its underside. This word is an anglicization of the New Latin term polyporus introduced by Italian botanist Pier Antonio Micheli in 1729. It contains the prefixoid poly‑ ‘many’ and the Latin noun pŏrus ‘pore, passage in the body’ (source of learned Eng. pore and equally learned Sp. poro), referring to the pores or tubes from which spores are expelled. 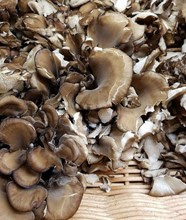 Maitake is a parasitic (although not lethal) mushroom native to China, (mostly northern) Europe, and (mostly northeastern) North America and it is one of the main culinary mushrooms in China and Japan. Since it can be cultivated, it can be found in many places besides its original native habitats.

The Japanese word maitake (舞茸) translates literally as ‘dancing mushroom’. It is formed from the stem 舞い/まい (mai) of the verb 舞う/まう (mau) ‘to dance’, plus the word take (茸) meaning ‘mushroom’ (see above). In addition to its Japanese name, this mushroom traditionally goes by a variety of names in English that allude to the shape of these mushroom clusters, such as hen-of-the-woods (not to be confused with chicken-of-the-woods, see below),[1] sheepshead mushroom, ram’s head, and sheep’s head. In Spanish, it is also known as maitake, though the name cabeza de oveja ‘sheep’s head’ is also used, which is probably just a calque of its English name. But, again, maitake is not common to any of the regions where Spanish is spoken.[ii]

The scientific (botanical) name for this mushroom is Grifola frondosa, assigned to it by British botanist Samuel Gray in 1821.[iii] The genus name Grifola is an adaptation of the Ancient Greek word γρῖφος (grîphos) ‘conundrum, riddle’ and perhaps also ‘intricate’ (originally, it meant ‘fishing basket’). As for the appellative frondosa, that is the feminine form of a common Latin word, frondōsus/a ‘leafy, full of leaves’ (cf. Sp. frondoso/a).[2]

[1] The mushroom hen-of-the-woods should not be confused with chicken of the woods, also known as chicken mushroom, a name for mushrooms of the genus Laetiporus, especially Laetiporus sulphureus, see below.

[2] The Latin adjective frondōsus/a was derived from the noun frōns, genitive frondis (root: frond‑), that meant ‘leafy branch, green bough, foliage’. This noun has given us the rare Spanish noun fronda ‘foliage’. This Latin word frōns should not be confused with another Latin frōns, genitive frontis, from which we get Eng. front and frontal and Sp. frente and frontal.