Words for mushrooms and other fungi, Part 10

Besides the champignon or button mushroom, there are several other common types of edible mushrooms that are well known in different versions of Western cuisine, as well as other cuisines around the world. Here we will look at some of the most common ones. We shall start with the shiitake mushroom, which is native to East Asia. 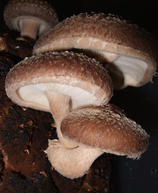 In English, shiitake is also known by a variety of other names, including sawtooth oak mushroom, black (forest) mushroom, (Chinese) black mushroom, and golden oak mushroom. The botanical name for these mushrooms is Lentinula edodes.[ii]

The word shiitake (椎茸)[1] is a Japanese compound word formed by the word shii (椎), the name of a type of East Asian tree, the chinquapin or chinkapin in English, of the genus Castanopsis, on which these mushrooms grow in the wild, and the word take (茸) that means ‘mushroom’.[2] Today, most commercially available shiitake mushrooms are cultivated.

In Spanish, this mushroom is also known by its Japanese name shiitake (an unassimilated word, not in the DLE yet) or, more commonly, as seta china ‘Chinese mushroom’. As we can see from the name seta china, this mushroom is not just found in Japan, but rather in much of East Asia. This mushroom is commonly found in Chinese food. Its Chinese name is es xiānggū (香菇) which means ‘fragrant mushroom’. In Vietnamese, its name is nấm hương; in Thai, เห็ดหอม (hèt hŏm); and in Korean (hangul alphabet), 표고 (pyogo).

There are some types of East Asian mushrooms that are known as ‘high-grade shiitake’. One is called dōnggū (冬菇) in Mandarin, a name that means literally ‘winter mushroom’. In Japanese, it is known as donko (冬菇), obviously a loanword from Chinese. In English, it is also known as Chinese black mushroom. Another ‘high-grade’ shiitake is called huāgū (花菇) in Chinese, which literally means ‘flower mushroom’.

The botanical name Lentinula edodes for this species of mushroom is a bit hard to explain. It belongs to the Lentinula genus (formerly Lentinus), which has only 8 species. The original genus name Lentinus was given to this species by Franklin Sumner Earle in 1909. It seems to be derived ultimately from the root lent‑ of the Latin adjective lentus, which could mean ‘slow’ like its Spanish descendant lento/a ‘slow’, but also ‘flexible, pliant’, among other things, and that seems to be what Earle had in mind. After the root, we identify the adjective-forming suffix ‑īn‑(us) ‘of or pertaining to’. Originally, shiitake was given the scientific name Agaricus edodes by Miles Joseph Berkeley in 1877, but it was changed to the Lentinula genus by David Pegler in 1976. As for the edodes epithet, it seems that it may have been created based on the Latin verb edĕre ‘to eat’, though what it is supposed to mean is not clear, for it is clearly a badly formed ‘Latin’ word.

[1] The Japanese name is written 椎茸 or 香蕈 in kanji script and しいたけ in hiragana.

[2] The words chinquapin or chinkapin can refer to different things: (1) ‘any of the shrubs in the genus Castanopsis’; (2) ‘any of the several trees and shrubs in the genus Chrysolepis’; (3) ‘some of the species in the chestnut genus Castanea’, among other things (Wikipedia). The word chinquapin comes from Virginia Algonquian, borrowed into English in the 17th century, ‘probably modification of Virginia Algonquian chechinquamin ‘chinquapin nut’’ (Merriam-Webster’s Collegiate).