Words for mushrooms and other fungi, Part 1

In this chapter we are going to explore the most common words used in English and Spanish to refer to living organisms of the biological kingdom (Sp. reino) known by the Latin botanical name Fungi, which contains primarily mushrooms, yeasts, and molds (Sp hongos, levaduras, and mohos). This kingdom is separate from the six other kingdoms of living organisms now recognized, which include those of plants and animals, whose Latin botanical names are Plantae and Animalia.[1]

In the vocabulary that we will be looking at, in some cases we find cognates in the two languages, such as Eng. fungus and Sp. hongo, though their meanings may not be the same, as in this case. We also find ambiguity and polysemy in some terms. So, for example, the word hongo is used in different ways depending on the context and thus translates into English as either (1) fungus, when it refers to any type of fungi in general, (2) as mushroom, the word for one particular type of fungus, and (3) sometimes also yeast, another type of fungus. We also find redundancies in the vocabulary, such as the fact that Spanish has two synonyms to translate the word mushroom, namely hongo and seta.

We will start by discussing what fungi are in §1.2, and the cognate terms used to refer to them in English and Spanish, namely Eng. fungus (pl. fungi) and Sp. hongo, as well as related terms, such as Eng. fungal and Sp. fúngico/a. In the remaining three sections we will look at different types of fungi—mushrooms, yeasts, and molds—and the names for these groups and subgroups. In §1.3, we look at words for mushrooms, along with a discussion at some 20 different types of common edible mushrooms; in §1.4 we discuss yeasts; and, finally, in §1.5, we look at molds. 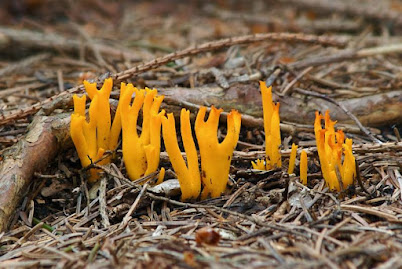 [1] The technical, scientific terms Eng. kingdom and Sp. reino for groups of organisms are translations of the Latin term regnum used by Carl Linnaeus in his rank-based system of nomenclature in biology, which was first published in 1735. For Linnaeus there were only two kingdoms of living organisms, Regnum Animale ‘animal kingdom’ (Sp. reino animal), for animals, and Regnum Vegetabile ‘vegetable kingdom’ (Sp. reino vegetal), for plants, plus one kingdom for non-living things, Regnum Lapideum ‘mineral kingdom’ (Sp. reino mineral), for minerals. A third kingdom of living organisms was proposed in the late 19th century: Kingdom Protista or Protoctista. In the 1930s, a new kingdom was proposed, the Monera, containing prokaryotic organisms, i.e., those without a distinct nucleus in their cells. Then, in the 1960s, two superkingdoms or empires were suggested to group living organisms, Prokaryota, containing just kingdom Monera, and Eukaryota, containing the three other kingdoms. Around that time, the fungi were moved out of the plant kingdom, Plantae, into its own kingdom, Fungi, and the kingdom Protista was split into the kingdoms Protozoa (which includes the ancestors of Animalia, Fungi, Plantae, and Chromista) and Chromista (the protists whose plastids contain chlorophyll c). In the 1970s, scientists divided Monera into two kingdoms: Eubacteria (later called Bacteria) and Archaebacteria (later called Archaea), based on ribosomal RNA structure. After that, the kingdom Chromista was separated from kingdom Plantae. Further discoveries led to the current consensus of two superkingdoms (empires), Prokaryota—with two kingdoms: Bacteria and Archaea—and Eukaryota—with five kingdoms: Protozoa, Chromista, Plantae, Fungi, and Animalia.