This is Part 20 of Slaves and Slavery: Go to Part 1

Other English and Spanish words related to slavery

As we saw in the preceding section, although English and Spanish have borrowed the words Eng. manumission ~ Sp. manumisión that refer to the freeing of slaves, these words are today used mainly with a historical context of the Romans’ freeing of their slaves. The words used for freeing of slaves in the modern world in English and Spanish are the cognates Eng. emancipation ~ Sp. emancipación, which descend from Latin ēmancĭpātĭōnem, a action noun derived from the verb ēmancĭpāre that meant ‘to emancipate’, that is, ‘to put out of the hand and power of the paterfamilias; to declare free and independent, to emancipate a son from the patria potestas by the thrice-repeated act of mancipatio and manumissio’ or, more generally, ‘to give from under one’s own power or authority into that of another’ (L&S). This word also had a derived wider sense, namely ‘to give from under one's own power or authority into that of another’ (L&S) and, ‘beyond the juridical sphere, to give up, surrender, sell’ (L&S). Latin did not use this verb to refer to the freeing of slaves, but rather the freeing of a wife or, usually, a child from the legal authority of the pater familias, a Latin phrase that means the male guardian of a family. In Spanish, it was common at least until very recently to use the concept padre de familia, a clone of Lat. pater familias, to refer to the male head of a family, and it still uses the term emancipación, and the related verb emanciparse, for the leaving by young people of their parents’ home.

English borrowed the noun emancipation from the Latin word through French émancipation in the middle of the 17th century. Fr. émancipation is already attested in the early 14th century (LGR) and it was first borrowed to refer to the Roman ‘action or process of setting children free from the patria potestas’ (OED). However, by the late 18th century, Eng. emancipation, just like its French and Spanish cognates, was being used to refer to ‘the action or process of setting free or delivering from slavery; and hence, generally, from restraints imposed by superior physical force or legal obligation; liberation’, which is the sense that is most common today (OED).[1] The word emancipation in English was also used in the cause of religious toleration in the 17th century, the anti-slavery cause in the 18th century, and in the women’s liberation cause in the 19th century. In addition, the canon law of the Roman Catholic Church has other senses for the term emancipation, such as ‘release from ecclesiastical obedience’.[i]

In English, the noun emancipation is often heard in the phrase Emancipation Proclamation, which refers to ‘the announcement made by President Lincoln on 22 September 1862 [during the US Civil War] emancipating all black slaves in states still engaged in rebellion against the Federal Union’ (OD).[ii] The same source goes on to say that ‘although implementation was strictly beyond Lincoln’s powers, the declaration turned the war into a crusade against slavery’ (OD). 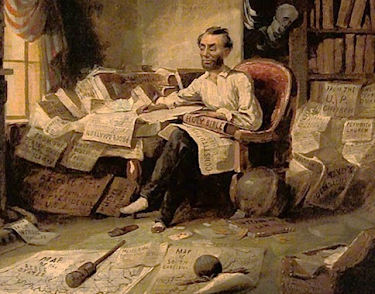 As we said, the Latin noun ēmancĭpātĭōnem (nominative: ēmancĭpātĭo), is derived from the verb ēmancĭpāre (earlier ēmancŭpāre). As we have seen in so many other occasions, such as when we described the word manumission, it was formed by adding the action noun suffix ‑ĭōn‑  to the passive participle stem of the verb, in this case ēmancĭpāt‑. The principal parts of the Latin verb ēmancĭpāre (earlier ēmancŭpāre) were present tense ēmancĭpo, present infinitive ēmancĭpāre, perfect ēmancĭpāvī, and passive participle ēmancĭpātus.

The verb ēmancĭpāre was derived by means of the variant ē‑ of the prefix ex‑ ‘out’ from the verb mancĭpāre ‘to transfer, sell’, a verb derived from the noun manceps (genitive: mancĭp‑is) ‘one who takes formal possession, a legal purchaser’, ‘a purchaser by lifting the hand, buyer at auction’, etc. (CTL). This noun itself was ultimately derived from a compound verb containing the root man‑ of the noun manus ‘hand’, followed by cep‑s which meant something like ‘taker’, since it is derived from the verb capĕre ‘to take, capture, etc.’ (cf. the cognate verbs Eng. capture ~ Sp. capturar, derived from this verb’s root). Spanish has borrowed Lat. mancĭpāre as mancipar ‘to make someone a slave’, a synonym of exclavizar, though it is a rare word.

English borrowed the verb emancipate in the 17th century from the passive participle form ēmancĭpātus of the Latin verb ēmancĭpāre. The French cognate of this verb, émanciper, is already attested in the 14th century and no doubt influenced the borrowing of the English word, even if English used the Latin verb’s passive participle as the source for this word, not the present infinitive. Sp. emancipar is attested quite early too, in 1260 (Partidas, cf. DCEH), and it is obviously a learned word (a loanword from classical, written Latin; Sp. cultismo), not an inherited or popular one (Sp. patrimonial).

The main meaning of both of these verbs is ‘to free from bondage, oppression, or restraint; liberate’, but a secondary legal meaning in both languages is ‘to release (a child) from the control of parents or a guardian’ (AHD).[2] In Spanish, more common than the transitive form emancipar is the intransitive pronominal form emanciparse, which translates as ‘to become emancipated’ when referring to a child or a wife, or ‘to gain independence’, when referring to a colony. Sp. emanciparse is also used in ways which do not typically translate into English by means of the verb emancipate, as in Las mujeres se han emancipado mucho ‘Women have become a great deal more liberated’ (OSD) or (synonym of independizarse) Difícilmente encontrará un trabajo que le permita emanciparse económicamente ‘He will not easily find a job that allows him to become economically independent’ (DUEAE).

There is another Latin word that was related to the verb mancĭpāre that we saw earlier, and thus to the noun manceps and to the verb ēmancĭpāre, namely the noun mancĭpĭum (earlier mancŭpĭum). This noun meant first of all ‘a possession, property, right of ownership’, but also, by extension, ‘a slave obtained by legal transfer’ (CTL).[3] In other words, Lat. mancĭpĭum was yet another word for ‘slave’ in Latin, besides sĕrvus. The noun mancĭpĭum was derived from the stem mancĭp‑ of the verb ēmancĭpāre by means of the suffix ‑ĭ‑(um) that we have seen before in this chapter (cf. §1.8.7 about sĕrvĭtĭum) that derived second declension neuter nouns (man‑cĭp‑ĭ‑um)

Interestingly, the word mancĭpĭum has been inherited patrimonially by Spanish, resulting in the now somewhat archaic patrimonial noun mancebo ‘youth, young man’. In the earliest attestations of this word, its meaning is clearly ‘slave’ or ‘servant’ (equivalent to criado, see above), but Berceo was already using in in the 13th century with the sense of ‘young man’, equivalent to joven and muchacho (DCEH). Actually, Sp. mancebo derives from the Hispanic Vulgar Latin version *mancĭpus of Lat. mancĭpĭum, presumably derived from the phrase homo mancĭpīi (DCEH). This *mancĭpus had penultimate stress, presumably by influence of mancĭpĭum (DLE), which has stress on the first (antepenultimate) ‑ĭ‑ because the penultimate syllable (the second ‑ĭ‑) is light (cf. Part I, Chapter 8).

Sp. mancebo has a feminine form manceba, which was derived in Spanish at some point from the masculine word. Some dictionaries give these words separate entries, however, for a manceba is not just a female version of a mancebo. Rather, manceba developed a separate and pejorative sense, namely that of ‘concubine’. Larousse defines manceba clearly (and only) that way, as ‘concubine, woman who lives with a man without being married’ (GDLEL).[4] María Moliner’s dictionary gives the same, single definition.

One dictionary that presents both words in the same entry is the academies’ DLE (earlier versions in the DRAE do too), though curiously there is also an entry manceba that all it does is refer us to the entry mancebo -ba. This dictionary gives six senses for this lexeme. Three of them apply to both the masculine and the feminine wordforms, though they are all rare (poco usado) and in one case, the feminine use is even rarer (in this use, the word is said to be primarily an adjective that can also be used as a noun). Finally, the sixth sense, which strangely enough we are not told is little used, is only feminine and thus refers only to women, which is the ‘concubine’ sense. Actually, the DLE defines this sense by means of the adjective amancebado/a ‘living together’ derived from the verb amancebarse ‘to cohabit, live together [without being married]’ (AEIV), which is itself derived from the noun mancebo/a (a‑manceb‑ar‑se).[5] Note that this verb, which appears already in Nebrija’s dictionary (1495), is only conjugated reflexively and, thus, there is no verb *amancebar, only amancebarse. The action noun derived from this verb is amancebamiento.

It is fair to say that all of these words, the noun mancebo/a, the verb amancebarse and the adjective amancebado/a, sound more than a bit archaic or historical today. Curiously, none of the major dictionaries seem to alert us of this fact, as the probably should. Also, because of this, it is fair to say that many Spanish speakers are not familiar with these words, though most educated speakers obviously are.

[1] The Latin term patria potestas, lit. ‘paternal power’, refers to ‘the power of the head of a Roman family over his wife, children, agnatic descendants, slaves, and freedmen including originally the right to punish by death and always embracing complete control over the limited personal and private rights and duties of all members of the family’ (Webster’s New Third International Unabridged Dictionary). The equivalent term in Spanish is patria potestad, a well-known and common term in the language. It is a legal term equivalent to the Roman one that refers to the legal authority that parents have over unemancipated children (‘autoridad que según la ley tienen los padres sobre los hijos no emancipados’, Gran Diccionario de la Lengua Española Larousse).

[3] The concept of mancipium in Roman law refers to ‘the status of a freeman subject to the power and control of the head of a Roman family similar to that of a slave except that he could not be abused or killed without legal cause’ and ‘the power or control so exercised by such head of family over such freeman’, as well as ‘a form of quiritarian as opposed to bonitarian ownership of property common in early Roman law’ (Merriam-Webster).