This is Part 18 of Slaves and Slavery: Go to Part 1

Other English and Spanish words related to slavery

Robots are not slaves, but they have a lot in common with them for, just like slaves, they are owned by people and do their bidding. And the prototypical robot is probably a machine that has human form. The first sense for the word robot in the American Heritage Dictionary is ‘a mechanical device that sometimes resembles a human and is capable of performing a variety of often complex human tasks on command or by being programmed in advance’ (AHD, my italics). Interestingly, the word robot, which first appeared in a Czech work of fiction in 1920, contains the root of the word for ‘slave’ in Slavic languages. Thus, we can say that Slavic languages have given us the word for ‘slave’ but also the word for ‘robot’.

Slavic words for ‘slave’ include Russian, Ukrainian, Belarusian раб (rab), and Bulgarian, Macedonian, Serbo-Croatian and Slovene роб (rob)/rob. The word in Old Church Slavonic was рабъ (rabŭ) in Cyrillic script, which in Glagolitic, was ⱃⰰⰱⱏ (rabŭ). The ancestor of these words’ in Old Slavic has been reconstructed as *õrbъ (*orbu). What the ancestor of this word was in Proto-Indo-European, we do not really know, though there have been some proposals in the linguistic literature. 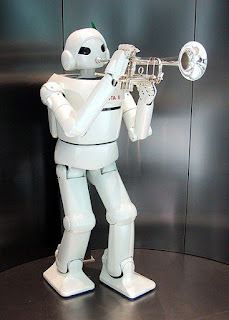 English and Spanish borrowed the word robot from the word robot that Czech writer Karel Čapek created out of Czech robota ‘work’ to refer to human-like mechanical devices in a science fiction play that first saw the light of day in 1921. Note that in Czech, in addition to meaning ‘work’, the noun robota can also mean ‘forced labor’, ‘drudgery’, and ‘servitude’. So much for the claim that work dignifies man.

The word robot first appeared in a 1921 science-fiction play by Czech writer Karel Čapek, and when the work was translated into English and Spanish, the word robot was taken whole, not translated, hence entering these languages. The OED explains that the word robot occurs ‘as though an English word in the title of Čapek’s (Czech) play. The play was first performed in an English translation in New York in 1922’ (OED). This word caught on in all European languages, becoming the name for these machines in them. Although this Czech play was written in the Czech language, its original title was in English, and the title was R.U.R.: Rossum’s Universal Robots. Interestingly, Čapek had intended to create a word for these mechanical devices based on a Latin word, but he was convinced by his brother to use a word derived from the Czech word for ‘work’ and ‘forced labor’ instead. The rest is history.

A shortened version of the word robot was developed in English in the second half of the 20th century, namely bot, pronounced [ˈbɒt] or [ˈbɑt].[1] This word is first attested in a 1969 work of fiction as a clipping of the word robot, spelled ‘bot in that work (OED). By as early as 1990, but especially after 2000, the word bot was being used with the meaning ‘an automated program on a network (esp. the internet), often having features that mimic human reasoning and decision-making…’ (OED). The word bot has become extremely common in our computer- and Internet-centered world. 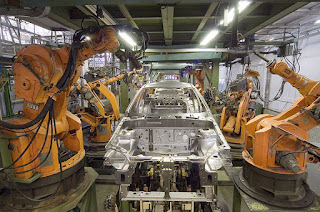 There are a few compounds derived from the word bot in English, such as botmaster ‘person who controls a bot’ and botnet ‘a network of computers infected with malicious software and controlled as a group without the owners’ knowledge, typically used to send spam, perform distributed denial of service attacks, etc.’ (OED). A common type of bot is the search bot, also known as a spider or webcrawler, which ‘crawls’ the web an indexes its content for search engines. Then there are chatbots, which answer customers questions.

Some technologically savvy speakers of Spanish have borrowed the English word bot as bot, pronounced [ˈbot]. However, this word is still not as common in Spanish as it is in English and it is not found in dictionaries such as the Academies’ DLE. Thus, English-Spanish dictionaries, such as Collins, translate Eng. bot as robot. The expression search bot, for instance, is still best translated as robot de búsqueda in Spanish, instead of bot de búsqueda.

[1] Note that there was already a noun bot in English, one that meant ‘the parasitic larva of a botfly’ (AHD). This word dates from the early 16th century and we are told that it is ‘probably of Low German origin’ (OAD).