Slaves and slavery, part 2: The Slavs and their languages

This is Part 2 of Slaves and Slavery: Go to Part 1

The Slavs and their languages 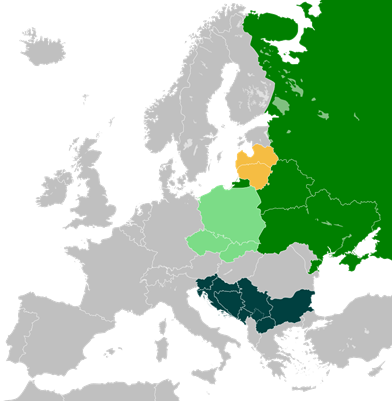 The ethnonym that we use today for Slavs or Slavic peoples is one that originates in the ethnic group itself, and not from outsiders, as so many other ethnonyms. As we will see later, it is not clear what the name’s origin is exactly or whether it was originally used by all Slavs or only by some of them.

A Roman writer from the middle of the 6th century gives three Latin names for the Slavic peoples, Veneti, Antes and Sclaveni, which seem to correspond to West Slavs, East Slavs, and South Slavs, respectively.[ii] The latter name, Sclaveni, is clearly related to the name Slav and its cognates that are used today for the whole of the Slavs in most western languages. The name given to Slavic people in the bordering Germanic lands of northern and central Europe in the 8th century was Wends, a word that is cognate with the name Veneti that we just saw, cf. Old English Winedas, Old Norse Vindr, German Wenden or Winden, Lat. Veneti, Venedi or Venethi, Greek Ουενεδαι (Ouenedai), and Sp. wendos or vendos.[iii] 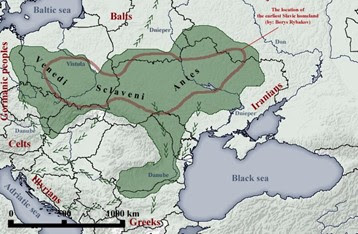 Figure 2: Approximate distribution of the early Slavs in the 6th century[iv]

Slavic peoples originally inhabited a large portion of Central and Eastern Europe. Southern Slavs are descendants of Slavic peoples who in the second half of the 6th century migrated south, into areas that had been part of the Roman Empire, during the second wave of the Migration Period in Europe (Sp. Período de las grandes migraciones).[v] In modern times, Southern Slavs are associated with the countries of Bulgaria and Yugoslavia (‘South Slavia’), though the latter split into several countries after 1991. Today, southern Slavs are separated from their western and eastern cousins by the countries of Romania and Hungary, the former a Romance-language-speaking country and the latter, a non-Indo-European-speaking one (cf. Part I, Chapter 3).

The earliest attested (written) Slavic language was Church Slavonic, where the ethnonym for Slavs appears as (plural) Словѣне (Slověne) ‘Slavs’. The medieval names Slavonia and Slovenia meant basically ‘land of (the) Slavs’. In recent times, Slovenia is the name of a small country that resulted from the disintegration of Yugoslavia, which was a federation of southern Slavic nations for most of the 20th century. The modern Republic of Slovenia was the first country to split off from Yugoslavia, in 1991, since it had the closest connection to and affinity with other European countries. The adjectives for things related to this country are Slovene or Slovenian. The language of this republic itself is known as either Slovene or Slovenian, and it is very close to Bosnian, Croatian, Montenegrin, and Serbian of neighboring republics, and somewhat less close to the eastern southern Slavic language spoken further east in the Balkan peninsula, namely Bulgarian.

The ethnonym *Slověninъ (singular of Slověne) is, as we said, an autonym or endonym (Sp. endónimo), a name that (at least some) Slavic people used for themselves, as opposed to an exonym (Sp. exónimo), which is a name given to a people by outsiders. The most popular explanation for this name is that it is derived from the word slovo meaning ‘word’, though the word slava ‘fame’, which is related to slovo and derived from it, has also been suggested as a source for the ethnonym. It is not uncommon for a people to refer to themselves as the people who speak something understandable, as opposed to foreigners, who do not. Related to this is the fact that Slavic people refer to foreign people as people who do not speak normally, using terms such as němci, meaning ‘mumbling, murmuring people’, from the Slavic word *němъ meaning ‘mumbling, mute’, to refer to Germanic peoples, cf, Russian не́мец (némec) ‘German’ (earlier ‘foreigner’), cf. Proto-Slavic *němьcь ‘foreigner, German’, derived from *němъ ‘mute’. The Slavic words slovo and slava are thought to contain a root that descends from the Proto-Indo-European root *ḱlew- ‘be spoken of, glory’, from which also come Ancient Greek κλέος (kléos) ‘fame’, Latin cluēre ‘to be called or named’, and English loud.

Another common word that contains the same root slov‑/slav‑ is Slovak, which currently refers to a West Slavic ethnic group and nation that forms the Republic of Slovakia in a region settled by Slavs in the 5th and 6th centuries. The original name of this people was Slovenin/Slovene, but the name was changed to Slovák in the early 15th century under the influence of Czech and Polish, two other West Slavic languages.[vi]

We do not know much about the early language of the Slavic peoples (Sp. pueblos eslavos). We use the term Proto-Slavic (Sp. protoeslavo) for the unattested, reconstructed proto-language of all the Slavic languages, spoken from approximately the 2nd millennium BCE through the 6th century CE.[vii] Throughout this period, this common ancestral language increased in variation, although mutual intelligibility of the various dialects or varieties is assumed to have lasted until at least the 10th century CE. The ancestor of Proto-Slavic is known as Proto-Balto-Slavic (Sp. protobaltoeslavo), which is the ancestor of Slavic languages (Sp. lenguas eslavas) and the related Baltic languages (Sp. lenguas bálticas), whose present-day remnants are modern Lithuanian and Latvian, spoken in the nation-states of Lithuania and Latvia that recovered their independence from the Soviet Union in 1990/1991 (see Figure 1). This proto-language ultimately descends from Proto-Indo-European (Sp. protoindoeuropeo), which is also the ancestor of the Germanic and Romance languages, and thus, English and Spanish (cf. Part I, Chapter 3). The Proto-Slavic period is assumed to have had an early period with little variation, moving on to a late period with significant variation which then gave rise to the modern Slavic languages.

We do not have significant written texts in a Slavic language until the 9th century CE, at which time appeared texts written in what is known as Old Church Slavonic (Sp. antiguo eslavo eclesiástico), the first Slavic literary language, whose autonym was словѣ́ньскъ ѩꙁꙑ́къ (slověnĭskŭ językŭ). Other names this ancient written language goes by are Old Church Slavic and Old Bulgarian. The language was first committed to writing and standardized by the Byzantine missionaries Cyril and Methodius using an alphabet of their creation known as the Glagolitic script (Sp. alfabeto glagolítico or glagólico, or glagólitsa).[viii] This alphabet evolved into one devised in the Preslav Literary School of the First Bulgarian Empire, developed by Bulgarian-Macedonian disciples of Cyril and Methodius, based in part on the Greek uncial script (Sp. caligrafía uncial).[ix] This Slavic script is known as the Cyrillic script or alphabet, after Cyril (Sp. alfabeto cirílico). This script used letters from the Greek alphabet as well as some from the Glagolitic script for sounds that did not exist in Greek.

Although Old Church Slavonic was based on Southern Slavic languages, it has played a big role in the development of many written Slavic languages, in particular for eastern Slavs, who are also members of the Eastern Orthodox and Eastern Catholic churches who still use variants of the Cyrillic alphabet to this day (West Slavs were associated with the Western Catholic Church, also known as the Latin Church or Roman Catholic Church).[x] More than 250 million people use the Cyrillic alphabet today, about half of them Russians. The version of the Cyrillic alphabet used in Russia was reformed in the 18th century by Peter the Great. Slavic countries that adopted Catholic Christianity, however, adopted the Latin alphabet, such as Polish, Czech, Slovak, and Croatian.

[i] Source: Map by user Hmxhmx. Based on this file on Wikimedia Commons by user Maix; Date 4 September 2016; https://commons.wikimedia.org/wiki/File:Balto_Slavic_countries.svg

[ii] The source of this information was Jordanes in the work De origine actibusque Getarum (‘The Origin and Deeds of the Getae [Goths]’), which is commonly abbreviated as Getica. This is one of the only two sources of information about the history of the Goths that has survived, the other one being Isidore of Seville’s Historia de regibus Gothorum, Vandalorum et Suevorum (‘History of the Kings of the Goths, Vandals and Suevi’), from the early 7th century.