Slavery is as old as civilization and the appearance of stratified societies a mere 4,000 years ago at the beginning of the bronze age. Mesopotamians, Egyptians, and Hebrews practiced slavery well before Greeks and Romans did. That the Jews practiced slavery is evidenced all over in the Jewish Bible, the Old Testament of Christians, as well as in the Christian Bible, the Christians’ New Testament.[i] Earlier hunter-gatherer societies had no use for slavery, but its practice was an important part of all ancient civilizations, including those of Greece and Rome that the West embraces as its foundational civilizational sources. Slavery was less common in the early Middle Ages in Europe and in the modern age, from 1500 to the present, with some glaring exceptions. Also, we must not forget that some forms of slavery persist even today in the world, although the practice is no longer legal.[1] 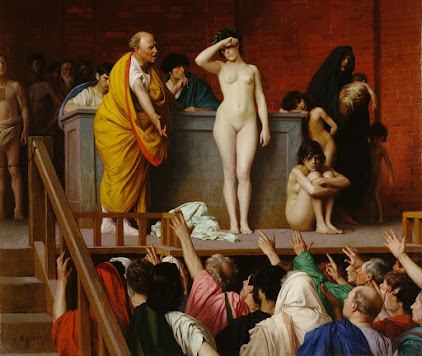 A slave is by definition ‘one who is the property of, and entirely subject to, another person, whether by capture, purchase, or birth; a servant completely divested of freedom and personal rights’ (OED). Slavery is not the only form of human bondage, however. A distinction is often made between chattel or traditional slavery, in which the person is the personal property or chattel of the owner, and other types of bondage, such as debt bondage, serfdom, as well as other types of forced labor, including forced marriage.

In antiquity, those who were defeated in wars of conquest and plunder were often turned into slaves, though people could also become enslaved through debt, and children could be sold into slavery by their parents, usually also to pay back debts incurred to buy food during a bad harvest, for instance.[2] Even free individuals who were captured and kidnapped by pirates were sold into slavery, unless they were high-value hostages, in which case they could be ransomed, which is what happened for instance to Julius Caesar, St. Patrick (patron saint of Ireland), King Richard I of England, and Miguel de Cervantes, the writer of Don Quixote, among many others.

In many societies, such as that of Ancient Rome, the child of a slave woman was also a slave, regardless of who the father was. Abandoned (‘exposed’) children were also often collected to be raised as slaves in Roman society, as well as criminals, who were also often turned into slaves.

The Arab slave trade from the 7th to the 20th centuries and the Atlantic African slave trade from the 17th to the 19th centuries are two well-studied examples of this practice. Actually, slavery was endemic in the African continent well before Europeans started to send African slaves to the Americas around 1600 for the following 250 years in order to work in the Spanish, Portuguese, and English colonies to provide Europe with things like cotton and sugar for the enrichment of a few individuals, but also of society as a whole. One major difference about slavery in the Americas is that it was based on ‘race’ or ‘skin color’ (African origin), something that had not been the case in the past.

Pretty much all the societies or civilizations of the Mediterranean of around two millennia ago were slave societies. A slave society is not merely one in which there are slaves. Rather, a slave society has been defined as one whose economy depends on slaves to exist, with at least 30 percent of the population being slaves and slave labor accounting for a major part of production.[iii]

Ancient Greece was a slave society too. Slavery was a very common practice in the Greek city-states, though it was much more common in the rich ones. Most slaves were barbarians (non-Greeks) and all barbarians were considered slave material, though occasionally Greeks were also enslaved.[iv] The Spartans (Sp. espartanos) could devote themselves to their well-known bellicose pursuits because all the work was done by a people they had enslaved, the helots (Sp. ilotes), who were seven times as numerous as the Spartans at one time, in the 5th century BCE, according to Herodotus.[v] In classical Athens (5th and 4th centuries BCE), a very powerful city-state that some view as the birthplace of democracy, about one third of the population were slaves.[vi] Most philosophers of Greek antiquity, whom we view as our intellectual ancestors, defended slavery as a natural institution. Greek philosophers of that period that we greatly admire today, such as Socrates, Plato and Aristotle, all justified slavery, though some think that the Stoics were an exception. Justification of slavery continued by Christian theologians in the Middle Ages, such as St. Augustine and St. Thomas Aquinas, though with some qualifications.

In the Roman world, as much as one third of the population of the Italian peninsula consisted of slaves at the end of the Roman Republic and the beginning of the Roman Empire, due to the many wars of conquest that had taken place. According to Roman law, ius gentium or ‘law of nations’ (Sp. derecho de gentes), a victor in war had the right to enslave a defeated population.[vii] For example, during the Third Punic War (146 BCE; Sp. Tercera Guerra Púnica), after the Romans destroyed the city of Carthage (Sp. Cartago), only on the last day did they take prisoners, at which time all 50,000 survivors were sold into slavery. Likewise, when Julius Caesar (Sp. Julio César) defeated the Atuatuci people (Sp. Aduáticos), a Gallic (Celtic) people in what is now France in 57 BCE, 4,000 were killed during a siege and the remaining 53,000 were all reduced to slavery. It has been estimated that a million Gallic Celts or one tenth of the Celtic population of Gaul were enslaved during Caesar’s Gallic Wars (58-50 BCE). Another great source of slaves during the Roman Republic came after the destruction of the Seleucid Empire by the Romans (100-63 BC). Such wars of conquest were, no doubt, justified by the Romans as defensive, retaliatory, or even preventive, just like all wars are justified today. Still, slavery in Rome is said to have started quite early on, at first consisting of parents selling their children into slavery, mostly to pay their debts.

In this chapter we are going to explore the vocabulary used to refer to slaves and slavery in English and Spanish, including the many terms that are cognate in these two languages, but also a few that are different. The first set of cognates that we should look at is Eng. slave ~ Sp. esclavo, of course. These words derive from the ethnonym of a people, the Slavic peoples, or Slavs (Sp. eslavos) and thus in the next section we will introduce these peoples and their languages before moving on to analyze the history of the words themselves.

[1] Modern slavery takes the form of human trafficking, forced labor, debt bondage, and forced and early marriage, among others. According to a report published in The Guardian in 2019, ‘an estimated 40.3 million people—more than three times the figure during the transatlantic slave trade—are living in some form of modern slavery, according to the latest figures published by the UN’s International Labor Organization (ILO) and the Walk Free Foundation. Women and girls comprise 71% of all modern slavery victims. Children make up 25%… of all the slaves worldwide’ (2009.02.25).

[2] The term antiquity (Sp. antigüedad) refers to ‘the distant past, especially the classical and other civilizations before the Middle Ages’ (COED). In the West, this term is typically used in regards to the classical antiquity, which includes the periods in which Ancient Greece and Rome were in the ascendancy in Europe.