[This entry is taken from a chapter of Part II of the open-source textbook Spanish-English Cognates: An Unconventional Introduction to Spanish Linguistics.]
This is Part 2 of 3. Go to Part 1

Let us now take a look at the origin of Eng. grape [ˈɡɹeɪ̯p], the equivalent of Lat. ūva, whose history is equally interesting and convoluted. This word also came into English from Od French grape, in the mid-13th century. Old French grape, first attested in the early 12th century, actually meant ‘bunch of grapes’, which is what grape meant in English too at first. Actually, the word grape ‘was first adopted in plural and collective uses, from which a new sense of the singular was afterwards evolved’ (OED). The new Middle English loanword grape replaced the Old English word for ‘grape’ which was winberige, a compound that literally meant ‘wine berry’. Clearly, the main purpose of grapes was then to make wine, much as it had been for the Romans and their descendants.

The French word grape that English borrowed did not come into French from Latin, however, but rather, ultimately, from a Germanic language, though the French word grape itself with the meaning it had in the 12th century was derived in French from the Germanic source from earlier uses. Old French grape, also spelled grappe and crape, was a feminine noun that meant ‘bunch of grapes’ and it seems to have been derived (in French) from the verb graper ‘to gather grapes with a vine-hook’, a verb which was derived, also in French, from the noun grape meaning ‘hook’. It is this last noun that ultimately comes from (unattested) Proto-Germanic *krappon- (cf. attested Old High German krapfo), also meaning ‘hook’ (OED). The French word grape has evolved into Modern French grappe (crappe in north-eastern dialects) and it now means ‘bunch’ when referring to fruits such as grapes, onions, or flowers, equivalent to Sp. racimo for fruits, Sp. ristra for onions, and Sp. ramillete for flowers.

The verb graper has not made into Modern French, since it became obsolete. Italian has a related noun grappa1 meaning ‘cramp iron’, that is ‘a piece of iron with bent ends for holding together building stones or the like’ (RHWUD). 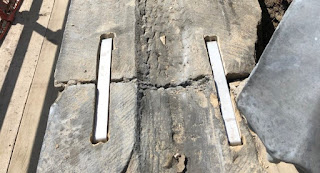 This meaning is derived from the original word’s source meaning ‘hook’.[ii] Another related word in Italian is grappolo (earlier grappo) meaning ‘bunch, cluster’, referring mostly to fruits or flowers, equivalent to French grappe (see above), e.g. grappolo d’uva ‘bunch of grapes’, grappoli umani ‘bunches/clusters of people’. The word for ‘cluster bomb’ in Italian is bomba a grappolo (cf. Sp. bomba de racimo, see above).[1] Note that the word for a single grape in Italian is uva, just like in Spanish. The expression for a single grape can also be acino d’uva, but here too ellipsis may take place and thus the word acino [ˈa.ʧi.no] by itself can also mean ‘grape’.

Spanish also has a word grapa whose main mean today is ‘staple’ (what comes out of a stapler when you staple things together, cf. Sp. grapadora and grapar). But the original meaning of Sp. grapa was is the same one that we just mentioned for Italian grappa1, namely ‘cramp iron’, used in construction and architecture. The meaning ‘staple’ that is primary today was derived, no doubt, from the shape of modern paper staples. 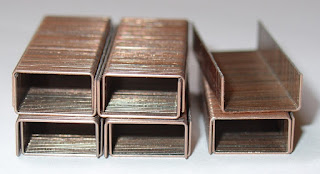 According to DCEH, this noun came into Spanish from Catalan grapa that meant ‘claw, talon’ (Sp. garra), though the word may have actually come from Italian for its use in architecture. It was borrowed in fairly recent times, since the first documentation in Spanish is from 1680, but the word is attested in Catalan and Italian much earlier, derived from the same Germanic source, namely some descendant of Proto-Germanic *krappon- (see above).

By the way, there is an Italian liqueur known as grappa in English and grapa in Spanish, whose name is borrowed from Italian grappa2. This is a homonym of the Italian word grappa1 that means ‘cramp iron’. It. grappa2 comes from the Lombard (Lombardian Romance) word grapa meaning ‘stalk’ (graspo in Standard Italian), which has the same Germanic source as grappa1 and is thus related to It. grappolo as well. Grappa is ‘a brandy distilled from the skins, pips, and stalks of the grapes after they have been pressed for wine-making’ (OED).[2]

[1] The OED also mentions that Italian has a verb grappare that means ‘to seize’, though it is presumably obsolete as it does not appear in any current Italian dictionary.

[2] The encyclopedia provides us with more information and it tells us that grappa is ‘a fragrant, grape-based pomace brandy of Italian origin that contains 35 to 60 percent alcohol by volume (70 to 120 US proof). Grappa is traditionally produced in Northern Italy and is also widely consumed in places such as Argentina, Bulgaria,… Uruguay and Galicia (better known as Spanish orujo or aguardiente)… Grappa is made by distilling the skins, pulp, seeds, and stems (i.e., the pomace) left over from winemaking after pressing the grapes. It was originally made to prevent waste by using these leftovers. A similar drink, known as acquavite d’uva, is made by distilling whole must. Grappa is now a protected name in the European Union. To be called grappa, the following [three] criteria must be met:  Produced in Italy, or in the Italian part of Switzerland, or in San Marino; Produced from pomace; Fermentation and distillation must occur on the pomace—no added water.’ (Source: https://en.wikipedia.org/wiki/Grappa, accessed on 2020.12.04.)

[ii] The meaning of It. grappa1: ‘a. Metal bar folded at the ends which, inserted in a wall structure, holds together the individual elements of the structure itself, or firmly anchors particularly stressed elements such as the projecting parts of a balcony, coats of arms, statues, balustrades; it is also used in wooden constructions, spec. in naval ones, to join and fix boards or beams. b. In common use, a metal element (iron bar or rod) to be inserted into the wall to hold or suspend plates, lamps, wall cabinets, etc., shaped in such a way that, once the hole necessary for its installation is closed , cannot be extracted.’ Translated from the original https://www.treccani.it/vocabolario/grappa1/ (retrieved on 2020.12.05).