The Latin word for ‘grape’ was ūva, pronounced [ˈuː.wa]. Its main meaning was just that, ‘the fruit of the vine, a grape’ (L&S). However, grapes are rarely found or eaten in singles, so it is not surprising that in addition to meaning ‘a single grape’, Lat. ūva came to have an additional extended sense, namely ‘a bunch or cluster of grapes’ (L&S). Lat. ūva was passed on to most Romance languages patrimonially, that is, by uninterrupted word-of-mouth transmission through the ages. Spanish has inherited this word as the patrimonial uva [ˈu.βa], which means ‘grape’, though not ‘bunch of grapes’ anymore.

Actually, this Latin word made it into English too, albeit it very superficially. English borrowed the word uva from Latin at one point, as a botanical term, but the word was always very rare now it is pretty much obsolete (cf. SOED, OED). Most English dictionaries do not carry this word anymore, but some do, and not only the Oxford English Dictionary, which gives its main surviving meaning as ‘Botany. A grape or raisin; a grape-like fruit’ (OED). Webster's New Third International Unabridged Dictionary is one of the few dictionaries that still carries and, curiously, it does not even mention it is rare. Its meaning: ‘a pulpy indehiscent fruit (as a grape) with a central placenta’ (WNTIUD). 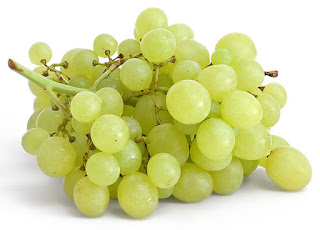 Latin had another word, răcēmus, that meant something very similar to the extended meaning of the word ūva, namely ‘the stalk of a cluster of grapes and similar plants’ (L&S). This word may be related to the Ancient Greek word ῥάξ (rháx) meaning ‘grape’ and the Persian word رز‎ (raz) meaning ‘vine’. This word changed to racimus in Vulgar Latin, which in Spanish became racimo, cf. Sp. racimo de uvas lit. ‘bunch of grapes’. The word racimo by itself translates as bunch or cluster but typically only when talking about grapes and perhaps also bananas and some other fruits that grow in bunches. Sp. racimo is also used in the expression bomba de racimo ‘cluster bomb/munition’, that is, ‘a bomb which releases a number of projectiles on impact’ (COED), a type of munition first used in War World II.[1]

Three Romance languages have done away with Lat. ūva and have come to use modern reflexes of Lat. răcēmus, or actually Vulgar Latin racimus, for the meaning ‘grape’: French, Occitan, and Catalan (DCEH). In Modern French, the word for ‘grape’ is raisin, pronounced [ʀɛˈzɛ̃], which is a descendant of Vulgar Latin racimus. French may extend the word raisin to refer to a single grape by means of the phrase grain de raisin, lit. ‘grain of grape’, i.e. ‘(single) grape’. This phrase was the original way to refer to a single grape in Old French, since raisin originally meant primarily ‘bunch of grapes’, as we saw. By the first half of the 12th century, this word is attested with both meanings, ‘grape’ and ‘cluster of grapes’ (OED). The word is found with different spellings in different varieties of Old French and Middle French. The same usurpation of the meaning ‘grape’ by descendants of Lat. răcēmus happened in Occitan and Catalan, cf. Occitan rasim (Old Occitan razim) and Catalan raïm, first attested in the early and late 13th century, respectively (OED). 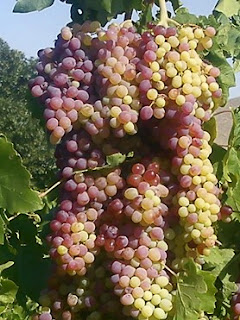 The French word raisin was borrowed into English from Anglo-Norman (a dialect of Old French) by the early 14th century. Eng. raisin, now pronounced [ˈɹeɪ̯zən], only refers to a dried grape today, i.e. a raisin. The original meaning of this word in English was the same as in Old French, namely both ‘grape’ and ‘bunch of grapes’ (OED).[2] Those meanings, however, are now obsolete. Today, raisin means simply ‘a partially dried grape’ (COED).

Actually, from very early on, the English word raisin could also mean ‘a dried grape’, in particular in the phrase raisins of Corauntz, equivalent to French raisins de Corinthe ‘grapes of Corinth’.[3] The English phrase raisins of Corauntz eventually got shortened (ellipsis) to corauntz or coraunce by 1500, and eventually evolved into the modern English word currant, pronounced [ˈkʌɹ.ənt], a word whose main meaning is ‘a small dried fruit made from a small seedless variety of grape, used in cookery’ (COED). The word currant has a secondary meaning or use since it is also ‘used in names of various small edible berries and the shrubs which produce them, e.g. blackcurrant, white currant’ (COED).

The word raisin translates into Spanish as pasa, a word derived also by ellipsis (shortening) of the phrase uva pasa (for more on ellipsis, see Part I, Chapter 5, §5.10.5). The word pasa comes from the feminine form passa of the passive participle passus/a of the 3rd conjugation Latin verb pandĕre, meaning ‘to spread out, extend; to unfold, expand’ (L&S; principal parts: pandō, pandĕre, pandī, passus). The only remnant of this verb in English and Spanish comes from its prefixed form Lat. expandĕre ‘to spread out, extend; to unfold, expand’, from which come Eng. expand ~ Sp. expandir. The reason for this name is, of course, that raisins are made by spreading grapes in the sun to let them dry. Engl. currant also translates into Spanish as pasa or more specifically, to refer to this variety of raisin, as pasa de Corinto. For the second sense of currant that applies to berries, the general term in Spanish is grosella, e.g. Eng. blackcurrant = Sp. grosella negra. This word is a loanword of Fr. groseille, of uncertain origin.

This word pasa is actually (distantly) related to the Spanish noun paso ‘step’ and to its English cognates pass and pace, from the late 13th century.[4] Thus, Sp. pasa is also related to the verb pasar ‘to pass; to spend; etc.’ derived from the noun paso, as well as to its English cognates, the verbs (to) pass (late 13th century) and (to) pace (early 16th century).[5] The relatedness is due to the fact that all of these words come ultimately from the 4th declension Latin noun passus ‘a step, pace’ (genitive: passūs), which was formed from the passive participle passus of the verb pandĕre that we just saw. (Despite the two words, the passive participle and the noun, being identical or homonymous, they had somewhat different derivations.)[6]

Before we leave the word ūva, we should mention a Latin word derived from it that has made it into English and Spanish as loans from written Latin, namely Eng. uvula [ˈjuvjʊlə] ~ Sp. úvula [ˈuβula]. These words are loans from Lat. ūvŭla, a diminutive of the word ūva, formed with the diminutive suffix ‑ŭl‑: ūv‑a + ‑ŭl‑ Ž ūv‑ŭl‑a. Lat. uvula seems to be only attested in medieval, medical Latin. Its literal meaning would have been ‘small grape’ or ‘small bunch of grapes’. However, the word was borrowed into European languages in the late Middle Ages to refer to a part of our anatomy, namely ‘a fleshy extension at the back of the soft palate which hangs above the throat’, flanked by the tonsils (Sp. amígdalas) (COED). The purpose of this organ seems to be to prevent foods and liquids from entering the nasal cavity. 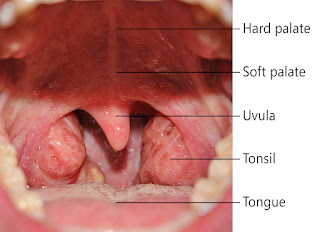 Figure 3: Inside of the mouth showing uvula and other organs.[iii]

A more technical term for this organ in English is palatine uvula, that is uvula of the palate. That is because the term uvula has come to be used for other anatomical structures as well, namely the uvula of the cerebellum, or uvular lobe, and uvula of the urinary bladder.[iv] (Most English dictionaries only give the definition for palatine uvula in their entries for uvula, but a few, such as Webster’s New Third International Unabridged Dictionary gives all three.)

Although Sp. úvula is the current technical term for this organ, other traditional names still in use are campana or campanilla, and gallillo or galillo. In phonetic science, consonantal sounds that are produced by the back of the tongue closing in on this region of the mouth are called Eng. uvular consonants and Sp. consonantes uvulares (cf. Part I, Chapter 7).

A second Latin word used in medieval, medical Latin related to, and derived from, Lat. ūva was ūvĕa (ūv‑ĕ‑a). This word has been borrowed as Eng. uvea [ˈjuviə] ~ Sp. úvea [ˈuβea] and since the 18th century it has been used in European languages as a medical term, a noun, referring to ‘the pigmented layer of the eye, comprising the iris, choroid, and ciliary body’ (COED), cf. Italian and Portuguese uvea, French uvée.[v] Lat. ūvĕa is strictly speaking an adjective, formed with the feminine form of the suffix ‑ĕ‑us/a that formed adjectives out of nouns, and it was probably used initially as an adjective. Note that úvea can still be used as an adjective in Spanish is túnica úvea, lit. ‘uveal tunic’, another term for the uvea (DLE). Other English terms for uvea are uveal layer, uveal coat, uveal tract, vascular tunic, and vascular layer. In English, uvea was used in the 16th and 17th centuries more broadly for ‘the posterior coloured surface or choroid coat of the eye’, a use that is now obsolete (OED). The use of uvea for the choroid in medieval medical Latin is quite old and it stems from a loan translation of an analogous term in Greek for the choroid, which means something like ‘grape-like’, cf. ῥαγοειδής (rhagoeidḗs) ‘like berries or grapes’: ῥ. χιτών in the eye, the choroid membrane, but including the iris’ (AGEL).

As we just saw, Spanish can use úvea as a noun or an adjective, but in English, uvea is now just a noun. Thus, English has derived the adjective uveal [ˈjuvɪəl] from this noun by means of the Latinate suffix ‑al with the meaning ‘pertaining or belonging to, consisting of, or affecting the uvea’ (SOED). Also derived from the noun uvea are the medical terms Eng. uveitis [ˌjuviˈaɪ̯ɾɪs] ~ Sp. uveítis [uβeˈit̪is] that mean ‘inflammation of the uvea’ (SOED). They were formed with the suffix ‑itis of Greek origin used in medical terminology to mean ‘inflammation’.

[2] The OED defines it thus: ‘‘a cluster or bunch of grapes. Also: a grape. Frequently in plural’ (OED).

[3] Corinth was a city located in south-central Greece, in the Peloponnese, cf. Sp. Corinto. The Ancient Greek city’s name was Κόρινθος (Kórinthos). The name will be familiar to Christians from the two letters from the apostle Paul in the New Testament, First and Second Corinthians. The city was demolished by the Romans in 146 BC, but a new city was built in its place in 44 BC, which later became the provincial capital of Greece during the Roman Empire. This city was re-founded as New Corinth in 1858, after an earthquake, cf. Gk. Νέα Κόρινθος (Nea Korinthos).

[5] The verb (to) pace  was derived in English in the early 16th century from the noun pace.

[6] Although this noun looks identical to the passive participle passus of the verb pandĕre, its derivation seems to be a bit more complicated, though it involves the participle stem pass‑ of the word with the addition of the suffix ‑t‑(us) that derives collective/abstract nouns from adjectives or other nouns. In other words, this passus comes from an earlier *pass‑t‑us. The ‑t‑ was eventually lost, however, giving us a noun passus identical to the passive participle passus.

There was even another passive participle passus in Latin for a different verb altogether, namely the third conjugation iō-variant, deponent verb patī ‘to suffer, endure, etc.’ (patior, patī, passus sum). From the root pass‑ of this participle the noun passĭōn‑ and the adjective passīvus were derived, from which we get the cognates Eng. passion ~ Sp. pasión and Eng. passive ~ Sp. pasivo/a, among other related words.