[This entry is taken from the chapter "Words about emotions in English and Spanish", of Part II of the open-source textbook Spanish-English Cognates: An Unconventional Introduction to Spanish Linguistics.] 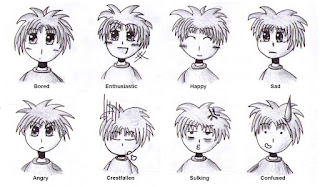 Figure 1: Simple faces drawn in the manga style, demonstrating a range of common emotions [i]


The meaning of the word emotion

What is an emotion? How many emotions are there? What are they? In this chapter, we are going to try to answer all these questions and more by way of talking about the words that we use for emotions in English and Spanish and their origins, focusing on words that are cognates in these two languages, such as the words Eng. emotion ~ Sp. emoción.
Let us start with the definition of the word emotion and its cognate Sp. emoción. English dictionaries differ as to how they define this word. Some dictionaries give a single major meaning (sense) for it, typically defined in terms of the word feeling, such as: ‘a strong feeling, such as joy, anger, or sadness’ (Concise Oxford English Dictionary, COED) or ‘a strong feeling such as love or anger, or strong feelings in general’ (Cambridge Advanced Learners Dictionary, CALD). COED adds a sub-sense derived from the main one: ‘instinctive or intuitive feeling as distinguished from reasoning or knowledge’. This is another common thread in definitions of the word emotion, namely that emotions contrast with reason, and the two are the source of struggle inside a person.

In a way, it may seem at first sight that it is an accident of history that English has two words, feeling and emotion, for what might seem to be very close meanings, with emotion reserved for ‘strong feelings’. At least the prototypical emotions are strong, such as fear or anger. However, many use the word emotion nowadays to refer to feelings that are not particularly thought of as being strong, such as amusement and gratitude, as we shall see. The point is that one can imagine a language in which only one word is used to translate these two words. English too did fine with just feeling for a long time before the word emotion was introduced in the late 16th century.

Some dictionaries divide the meaning of the word emotion into more senses. The American Heritage Dictionary (AHD) gives us the following definitions for three senses of this word:
1.   A mental state that arises spontaneously rather than through conscious effort and is often accompanied by physiological changes; a feeling:
the emotions of joy, sorrow, reverence, hate, and love.
2.   A state of mental agitation or disturbance:
spoke unsteadily in a voice that betrayed his emotion.
See Synonyms at feeling.
3.   The part of the consciousness that involves feeling; sensibility:
“The very essence of literature is the war between emotion and intellect” (Isaac Bashevis Singer).
Random House Webster’s Unabridged Dictionary (RHWU) gives five separate senses for the word emotion, though the last two refer to variants of the first three, which only partially overlap the senses and the definitions in the AHD:
1.   an affective state of consciousness in which joy, sorrow, fear, hate, or the like, is experienced, as distinguished from cognitive and volitional states of consciousness.
2.   any of the feelings of joy, sorrow, fear, hate, love, etc.
3.   any strong agitation of the feelings actuated by experiencing love, hate, fear, etc., and usually accompanied by certain physiological changes, as increased heartbeat or respiration, and often overt manifestation, as crying or shaking.
4.   an instance of this.
5.   something that causes such a reaction: the powerful emotion of a great symphony.

The point here is that it is not easy to define this word, in part because it is used with different senses as well as somewhat vaguely.

The Oxford American Dictionary (OAD) compares the word emotion with several semantically related words in order to differentiate them. The words it compares are affect, emotion, feeling, passion, and sentiment. This is what this dictionary has to say about them:

A feeling can be almost any subjective reaction or state-pleasant or unpleasant, strong or mild, positive or negative-that is characterized by an emotional response (a feeling of insecurity; a feeling of pleasure)

An emotion is a very intense feeling, which often involves a physical as well as a mental response and implies outward expression or agitation (to be overcome with emotion)
Passion suggests a powerful or overwhelming emotion, with connotations of sexual love (their passion remained undiminished after 30 years of marriage) or intense anger (a passion for revenge)

There is more intellect and less feeling in sentiment, which is often applied to an emotion inspired by an idea (political sentiments; antiwar sentiments). Sentiment also suggests a refined or slightly artificial feeling (a speech marked by sentiment rather than passion)

Affect is a formal psychological term that refers to an observed emotional state (heavily sedated, he spoke without affect)

The last word, affect, pronounced [ˈafˌɛkt] (not [əˈfɛkt] like the homograph verb) is actually a technical term in psychology. Spanish does not have an equivalent term, using the word emoción as its translation for Spanish already has the noun afecto, with a very different meaning, namely ‘affection’. Actually, there is a noun lexeme afecto that means ‘affection’, but it can also be a less common adjective afecto/a that means ‘fond (of)’ (followed by the preposition a) or, less commonly, ‘suffering (from)’ (followed by the preposition de). We will return to the English word affect below.

As for the English word sentiment, although it is not a technical term, it is quite a formal word, not an everyday one. It is a cognate of Spanish sentimiento, which primarily means ‘feeling’, a noun associated with (or ‘derived from’) the verb sentir ‘to feel’ (among other meanings), much like the noun feeling is derived from the verb to feel (see below). The cognates Eng. sentiment ~ Sp. sentimiento are not ‘best friends’, however, since their meanings are not identical. English-Spanish dictionaries tend to translate Eng. sentiment in two possible different ways, detecting that there are two senses for this English word: (a) a ‘feeling’ sense, which translates as sentimiento or sentir (the infinitive of the verb used as a noun, as in Ese es mi sentir ‘That is my feeling’), and (b) a ‘view’ sense, which translates as opinion or (the noun) parecer (a noun derived from the verb parecer, as in Ese no es mi parecer ‘That is not what I think’).

The American Heritage Dictionary (AHD) also has a usage note regarding these words. They can be found under the entry for the word feeling. This is what this dictionary has to say about the words feeling, emotion, passion, and sentiment, which it classifies as synonyms:

These nouns refer to complex and usually strong subjective human response. Although feeling and emotion are sometimes interchangeable, feeling is the more general and neutral: “Poetry is the spontaneous overflow of powerful feelings: it takes its origin from emotion recollected in tranquillity” (William Wordsworth). Emotion often implies the presence of excitement or agitation: “Poetry is not a turning loose of emotion, but an escape from emotion” (T.S. Eliot). Passion is intense, compelling emotion: “They seemed like ungoverned children inflamed with the fiercest passions of men” (Francis Parkman). Sentiment often applies to a thought or opinion arising from or influenced by emotion: We expressed our sentiments about the government's policies. The word can also refer to delicate, sensitive, or higher or more refined feelings: “The mystic reverence, the religious allegiance, which are essential to a true monarchy, are imaginative sentiments that no legislature can manufacture in any people” (Walter Bagehot).

The main point we are trying to make is that there are a number of words, in both English and Spanish, whose meanings overlap, and which also do not easily or perfectly correspond to words in the other language. Speakers are obviously confused, and dictionaries feel they have to clear up that confusion, although even they agree that the matter is confused. Before we leave the definition of the cognates Eng. emotion ~ Sp. emoción, we are going to look at a major meaning of Sp. emoción that does not translate as emotion in English. Later we will return to the meanings of the word feeling and its Spanish equivalents, after we explore the origin of the word emotion and its relatives.

The meaning of Sp. emoción

Spanish dictionaries typically give a single definition for the main sense of the word emoción that is quite similar to the ones we saw for its English cognate emotion. For example, the Diccionario de Lengua Española (DLE) gives the following definition for the primary sense of this word:
1.   Severe and temporary mood disturbance, pleasant or painful, which is accompanied by a certain somatic shock.[1]
This meaning is basically the same one we have seen for Eng. emotion. However, the Spanish noun emoción has another major and very common sense that English emotion does not have, one that is equivalent to Eng. excitement. Thus, for example, the Diccionario de Uso del Español de América y España Vox defines this sense the following way and gives several examples:
2.   Feeling of great interest or expectation or anticipation for something:[2]
la emoción del deporte ‘the excitement of sports’
una película con gran emoción ‘a movie with lots of excitement’
¡qué emoción!, mañana nos vamos de viaje. ‘How exciting! Tomorrow we’re going on a trip.’
todos escuchaban su relato con emoción. ‘Everyone listened to her story with excitement’
This sense of Sp. emoción seems to have developed in Spanish and it is not shared by cognates of this word, such as Eng. emotion and Fr. émotion.

The adjective related to (and derived from) the noun emoción is emocionante, a word whose main translation into English is exciting. In the adjective emocionante we recognize the suffix ‑ante used to derive adjectives and nouns from verbs, such as the noun cantante ‘singer’ from cantar ‘to sing’ and the adjective importante ‘important’ from importar ‘to matter’. The adjective emocionante is indeed related to a verb in Spanish, for Spanish has derived a verb from the noun emoción, namely emocionar, that means something like ‘to move emotionally’, as in the sentence Nos emocionaron sus palabras ‘We were touched by her words’ (Vox), but also ‘to excite, thrill’, as in El fútbol no me emociona ‘Soccer does not excite me’. When this word is used reflexively and, thus, intransitively, as emocionarse, its meaning can be ‘to be moved, be touched, get emotional’ but, also, ‘to get excited’, as in the idiomatic expression ¡No te emociones! ‘Don’t get all excited!’. These are all very common words in Spanish.

Thus, we can see that Eng. emotion and Sp. emoción share a meaning, one related to feelings and their effect on us, but in addition Spanish emoción has developed an ‘excitement’ sense that Eng. emotion does not have. This secondary sense has been extended to other words in the same word family (set of semantically and morphologically related lexemes). Exceptions to this are the adjectives derived from the same root, namely emocional and emotivo/a, cognates of the English words emotional and emotive.

We will return to the English adjectives emotional and emotive and their Spanish cognates emocional and emotivo/a after we discuss the origins of the word emotion and its cognates.

Email ThisBlogThis!Share to TwitterShare to FacebookShare to Pinterest
Labels: emotions