[This entry comes from Chapter 18, "Eng. language and Sp. lenguaje: words ending in Eng. -age and Sp. -aje", of Part II of the open-source textbook Spanish-English Cognates: An Unconventional Introduction to Spanish Linguistics.]

The next Latin verb derived from vĭāre is dēvĭāre ‘to detour’, ‘to stray’, ‘to depart’. It was formed with the prefix (and preposition) dē ‘(away) from, etc.’. The verb’s principal parts were dēvĭō, dēvĭāre, dēvĭāvī, dēvĭātum. English borrowed this verb from the passive participle form of the verb dēvĭātus in the 16th century, resulting in deviate [ˈdi.vi.eɪ̯t], which means ‘to diverge from an established course or from usual or accepted standards’ (COED). In other words, Eng. deviate refers only to metaphorical or figurative departure from a ‘road’, unlike the original Latin word, which had both the (original) literal sense and the figurative one. It is often used in the expression to deviate from the norm. The Spanish equivalent of deviate (from) is desviarse (de), when deviating from a course, and apartarse (de) when deviating from a norm. (We will return to Sp. desviar in a minute.)

There is also a noun deviate in English, pronounced [ˈdi.vɪ.ət], created in the first half of the 20th century and which is now rare since the same meaning is typically expressed by the related word deviant. The meaning of the noun deviate is ‘a person who, or thing which, deviates; especially one who deviates from normal social, etc., standards or behavior; specifically, a sexual pervert’ (OED). The noun deviate was derived, in English, from the verb deviate and it has also been used as an adjective, though deviant is preferred nowadays.

The word deviant [ˈdi.vɪ.ənt] has been around since the early 15th century, when it was an adjective that meant ‘different, deviating, straying’. Although it could have been created in English from the verb deviate and the Latinate suffix ‑ant, it may also presumably have been borrowed from Late Latin dēviāntem ‘straying, deviating, detouring’, accusative form of the present participle of the verb dēviāre (the nominative form of the participle was dēvĭāns). In the early 20th century, Eng. deviant came to be used as a noun that meant ‘something that deviates from normal’ (Sp. anormal) and not until the middle of the 20th century did it come to mean ‘person whose sexuality deviates from what is held to be normal’ (OEtD), a synonym for the noun deviate that we just discussed (OED). The Spanish equivalent noun is pervertido/a, which literally means ‘perverted’, and is derived from the past participle of the verb pervertir ‘to pervert’ (cf. Part II, Chapter 8, §8.2.4).

As we saw above, a possible translation of the English verb deviate in Spanish is desviarse, the reflexive or pronominal (intransitive) form of the verb desviar. The Spanish verb desviar seems to be patrimonial and it is first attested in the 12th century. It is a semi-false friend of the English verb, since their meanings only partially coincide. Also, it appears to be a false cognate since the Spanish verb has a prefix des‑, which is typically a reflex of the Latin prefix dĭs ‘apart, asunder’, which is used with the meanings ‘privation’, ‘negation’, or ‘inverse action’, instead of de‑, which is what the Latin prefix dē‑ changed to. This, however, is a common switch that happened early on in some Spanish patrimonial words. It stems from a confusion between the two Latin prefixes due to the fact that Lat. dĭs lost its s before some consonants, and thus became Sp. de‑, just like Lat. dē‑ did. Thus, Spanish sometimes confused the two prefixes and turned Lat. dē‑ into des‑, as in the case of the word desviar.

Whereas English deviate is an intransitive verb that means ‘diverge from an established course or from usual or accepted standards’ (COED), Spanish desviar is a transitive verb that means primarily ‘to change course of’, ‘to deflect’, and ‘to divert’. The reflexive version desviarse results in the intransitive version of those meanings, namely ‘to go off course’, ‘to make a detour’, ‘to be deflected’, ‘to turn off’ and occasionally, ‘to deviate’, in the sense of deviating from a given course, as we saw earlier.

In addition to these two verbs, we find a pair of derived cognate nouns in English and Spanish, namely Eng. deviation and Sp. desviación. These nouns come from a Latin noun derived from the passive participle stem of this verb, dēviāt‑, plus the noun suffix ‑ĭōn‑ (cf. Part II, Chapter 10). Not surprisingly, these cognate nouns are no better friends than the verbs they are associated with, even though some dictionaries equate the two (e.g. according to AES, Collins, and OSD, Eng. deviation = Sp. desviación).

Eng. deviation [ˌdi.vɪ.’eɪ̯.ʃən] means ‘the act or result of deviating’ (COED), but more specifically, it means ‘a noticeable difference from what is expected or acceptable’ (DOCE), including ‘deviant behavior or attitudes’ and ‘divergence from an accepted political policy or party line’ (AHD). It seems that the only time that desviación is an accurate translation for deviation is in a number of limited cases, such as when it acts as a technical term in statistics (deviation = desviación = ‘the amount by which a single measurement differs from a fixed value such as the mean’ (COED), e.g. standard deviation = desviación estándar or típica. In other cases, deviation should be translated as divergencia, variación, alejamiento, etc.

As for the meaning of desviación, this word translates primarily into English as diversion or detour. It can also translate as departure, deflection, turning aside, digression, aberration, or abnormality. Besides the collocation with desviación in the field of statistics that we just saw, one other collocation with this word in Spanish is desviación de columna ‘abnormal lateral curvature of the spine’, also known as Eng. scoliosis ~ Sp. escoliosis, from Gk. σκολίωσις (skoliosis) ‘bending’.

Finally, we should mention that Spanish has another noun derived from the verb desviar, namely desvío, which is a synonym of the road-related main sense of desviación, namely ‘detour’. The noun desvío is the result of a conversion (zero derivation) of the verb desviar without the use of derivational affixes, just by changing the verbal inflectional ending ‑ar for a masculine noun inflectional ending ‑o (cf. Part I, Chapter 5, §5.7). 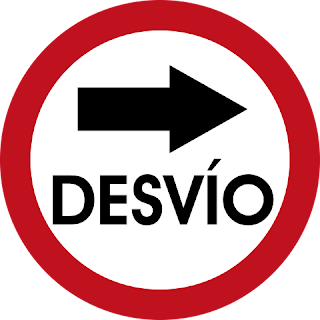 Email ThisBlogThis!Share to TwitterShare to FacebookShare to Pinterest
Labels: suffix-age