[This entry is an excerpt from Chapter 6, "An enchanting chant: The Latin root CAN-", of Part II of the open-source textbook Spanish-English Cognates: An Unconventional Introduction to Spanish Linguistics.]

[LIST OF ALL ENTRIES IN THIS BLOG BY TOPIC]

Unexpected cognates: The Latin root can‑

What do the English words chant, cant (meaning ‘insincere talk’ or ‘argot’), and enchant have in common? Furthermore, could they be related to the Spanish words cantar ‘to sing’, canto ‘song’, and encantar ‘to please in great measure’? Indeed, as you may have guessed, what all these words have in common is that they all share the same Latin root, namely can‑. And, of course, each of these three pairs of words are indeed cognates, even if their meanings are not exactly the same and thus constitute what we have been calling false friends (or at least partially false friends).

In this chapter we are going to look at these cognates and many others who are ultimately derived from the very same Latin root can‑, such as the following pairs:

The Latin root căn‑ is primarily a verbal root, found most basically in the third conjugation Latin verb cănĕre  (căn+ĕ+re). This verb was polysemous, that is, had several meanings or sensens (cf. Part I, Chapter 6, §6.5): ‘to sing’, ‘to recite’, ‘to chant’, ‘to sound, play’. In this chapter, we are going to explore the words that derive from this Latin root in English and Spanish. As we will see, most of them have cognates in the other language. This verb canĕre’s principal parts were cănō canĕre, cĕcĭnī, and cantum (for an explanation of principal parts, see Part I, Chapter 8, §8.4.3.1).

The words that we mentioned above are not derived directly from the root ‑can‑, but rather, from the base or stem of the passive participle form of this verb, namely can‑t‑, which was formed by adding a ‑t‑ to the verbal root, as we can see in the verb’s fourth principal part cantum (the final ‑um is the supine inflexional ending). The vast majority of the descendants of this root in English and Spanish come from the stem can-t‑, as we shall see.

The Latin root căn‑, which has the variants ‑cĕn‑ and ‑cĭn‑ in certain combinations, as we shall see, has been reconstructed as *kan‑ in Proto-Italic, the ancestor of the Italic Indo-European languages of the Italic Peninsula (it is thus identical in sound to the Latin root). Going back further in time, this root descends from Proto-Indo-European reconstructed language, spoken more than 6,000 years ago, from which all Indo-European languages descend (cf. Part I, Chapter 3). The Proto-Indo-European root in question has been reconstructed as *kan‑, meaning that it has not changed much, though a more ‘technical’ reconstruction is *keh₂n‑. As in the Latin language, this was also a verbal root, also meaning ‘to sing’.

This Proto-Indo-European root seems to only be found in direct descendant word in English, that is, in a patrimonial word that has descended by direct oral transmission over the centuries, as opposed to one that has been borrowed from other languages, such as the words chant and accent. The word is hen, the word that means ‘a female bird, especially the adult female of the domestic fowl’ (AHD). The connection between the original root that meant ‘to sing’ and the bird would seem to be that the ancestors of English speakers took to calling the hen something like ‘the singer’. The word hen comes Proto-Germanic *hanjō ‘hen’, which contains a reflex of the Proto-Indo-European *kan‑ ‘to sing’ (Proto-Indo-European k changed to h in Germanic languages, cf. Part I, Chapter 3). 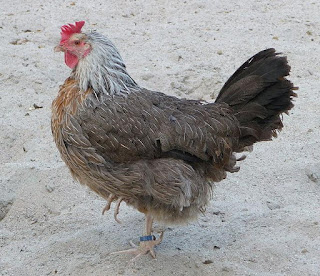 Old English had a related, masculine word hana which meant ‘cock, rooster, male chicken’, a descendant of Proto-Germanic *hanô, which also contained a reflex of the same Proto-Indo-European root *kan‑ (cf. German Hahn and Dutch haan). Old English hana ‘rooster’ was dropped by the Middle English period in favor of cock and rooster, two words that are worth exploring since they tell us a great deal about the source and vicissitudes of the English vocabulary.

The word cock for this bird, pronounced [ˈkʰɒk] or [ˈkʰɑk], is first attested in Old English in the late 9th century. It was spelled coc, cocc or kok in Old English and it was pronounced [ˈkʰok]. has a cognate in French coq ‘cock, rooster’, so the word may have come from that language, or else both got it from somewhere else. The details of these words’ ancestry are not very clear. What is quite clear is that these words have an onomatopoeic origin, that is, they derive from ‘an imitation of the cluck of the bird’ (OED). Proto-Germanic is the ancestor of English and of Frankish, a language that greatly influenced the Latin-based French language in the second half of the first millennium of our era. Frankish was an East Germanic language closely related to Old English. Proto-Germanic had the root *kukko- in the name of this bird, a root that we find in the English word chicken as well, that is the word that is thought to come from Proto-Germanic *kiukīną and which today means ‘a domestic fowl kept for its eggs or meat, especially a young one’ (COED).[1]

The word rooster, of course, is just a noun derived from the verb to roost. The verb itself is derived from noun roost, which in Modern English means ‘a place where birds regularly settle to rest at night, or where bats congregate to rest in the day’ (COED). The verb to roost in Modern English, which is used only for birds and bats, means to ‘settle or congregate for rest’ (COED). This word roost first appears as a noun in late Old English, with the form hróst, meaning ‘perch for domestic fowls’ or, more generally, ‘perching- or resting-place of a bird’ (OED). The word rooster started to be used for this bird very recently, in the late 18th century, in the region of Kent in England and, especially in the United States. The reason for this change is that the word cock had become a slang word for the penis starting about a century earlier. In other words, rooster started as a euphemism (cf. Part I, Chapter 6, §6.4.2). An earlier version of the noun rooster was roost cock. By the way, the word penis, which is the technical and ‘decent’ term for the male sexual organ, is a 17th century loanword from Latin.[2]

[1] The word chicken originally meant ‘young domestic fowl’, though the ‘young’ component of the meaning is not a necessary one anymore. Modern English chicken comes from Old English ċicen or cycen, which some think that originally was a diminutive form of the ancestor of the original word cock.
[2] Another ‘vulgar’ term for penis is dick. Dick started as a rhyming nickname for Rick, which is short for Richard, and thus became this name’s hypocoristic. Since this was a very common name in English, it came to be used with the sense of ‘fellow, lad, man’ by the mid-16th century. The sense ‘penis’ is from the late 19th century.

Email ThisBlogThis!Share to TwitterShare to FacebookShare to Pinterest
Labels: root-can