Horseradish is a perennial plant of the Brassicaceae family, which includes mustard, wasabi, broccoli, and cabbage, and is native to southeastern Europe and western Asia. Its botanical name is Armoracia rusticana, though it used to be Cochlearia armoracia in Linnaeus’s classification. The root and the leaves of this plant were used for medicinal purposes during the Middle Ages and the root, which has a very pungent flavor, has been used, scraped or grated, as a condiment in northern Europe for a long time as well.

Horseradish sauce, also known as horseradish or prepared horseradish, is made from the root of this plant and vinegar. This sauce is white to creamy-beige in color and it is commonly used as a condiment in Germanic and Slavic countries in a way similar to how mustard is used (in France it is called raifort). This condiment is not very common in the Spanish-speaking world, however. To the extent that it is used, the horseradish plant is known as rábano picante or rábano silvestre (also rábano rusticano or raíz picante, among other names). The word rábano in the Spanish name of this plant is the common translation for Eng. radish (see below). In the US, what is called horseradish sauce may contain mayonnaise or some other ingredients as a form of dressing. Prepared horseradish is also used in cocktails such as Bloody Mary, and in cocktail sauce more generally, as well as in sandwich spread. In Argentina, horseradish (sauce) is known as pasta de rábano picante, though the immigrants who introduced this condiment into the country also know it as cren (from its German name kren) or jren (from its Slavic name hren). 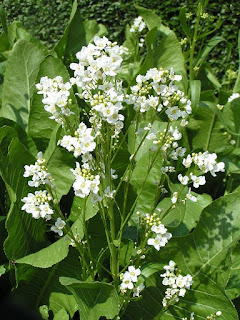 The word horseradish [ˈhɔɹs.ˌɹæ.dɪʃ] has been the English name for this plant since the late 16th century. Horseradish should not be confused with regular radish, whose botanical name is Raphanus sativus, an edible root plant of the same Brassicaceae family which was domesticated in Europe thousands of years ago. The two plants belong to the same family, Brassicaceae, but regular radish is of the Raphanus genus. The name rábano ‘radish’ in Spanish comes from the Latin name for the plant, which gives name to the genus, namely răphănus ‘radish’, a loanword from Ancient Greek ῥάφανος (rháphanos), a word that meant ‘radish’ but which may have also had other meanings as well. This Greek word may be related to or derived from the word ῥάπυς (rhápus) or ῥᾰ́φῠς (rháphus) meaning ‘turnip’.

The English word radish [ˈɹæ.dɪʃ] (rædic in Old English and radiche in Middle English) is not related to Lat. răphănus, but it is also a Latin borrowing. It comes ultimately from Lat. rādīcem, the accusative form of the noun rādix meaning ‘root’, which is also the source of patrimonial Sp. raíz ‘root’. In other words, Eng. radish and Sp. raíz are cognates. The word root in English is a patrimonial one which descends from the same Proto-Indo-European root as the Latin word rādix, namely *wrād- (or *wréh₂ds), which makes these words cognate as well, if not exact cognates (cf. Part I, Chapter 1, §1.2.[ii]

The name horseradish is obviously derived from the word radish, but what is the horse part all about? You may be surprised to know that it does not have anything to do with horses. Rather, the modifier horse used to be employed figuratively at one time in English with the sense ‘strong, large, coarse’. This same sense of the modifier horse is found in expressions such as horse mushroom, horse-parsley, and horse-weed or horse-mint.[1] 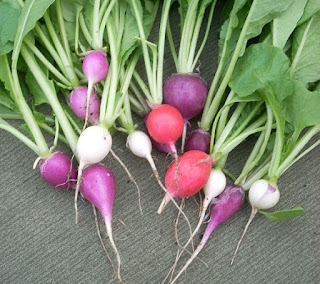 As we mentioned earlier, the horseradish is part of the Brassicaceae family of flowering plants, pronounced [ˌbɹæ.sɪ.ˈkeɪ̯.si.i] in English (Sp. brasicáceas). This family is also know botanically as the Cruciferae [kɹu.ˈsɪ.fə.ɹi] and, more commonly, as the crucifers, the mustards, or even the cabbage family (Sp. crucíferas). The botanical name Brassicaceae is a New Latin term derived from Latin brassĭca ‘cabbage’, and the ending ‑aceae which is used to form the name of taxonomic families of plants, algae, bacteria, and fungi (the equivalent for animals is ‑idae). It comes from the Latin ending ‑ācĕ‑ae, feminine plural of ‑ācĕ‑us, which meant something like ‘resembling’, cf. Eng. (cf. Lat. rŏsācĕus ‘made of roses’, source of Sp. rosáceo/a ‘rose-colored, pinkish’).

The alternative botanical term for this family of plants is Cruciferae, which means ‘cross-bearing’ since it is formed with the root cruc‑ of the noun crux ‘cross’ and the root fer‑ of the verb ferre ‘to bear’ (principal parts: ferō, ferre, tulī/tetulī, lātum). Vegetables from this family are known as cruciferous vegetables ([kɹu.ˈsɪ.fəɹ.əs]; Sp. verduras crucíferas), which, besides radish (Sp. rábano), and horseradish (Sp. rábano picante), include turnip (Sp. nabo), rape (Sp. colza), wasabi or Japanese horseradish (Sp. wasabi or rábano picante japonés), and several varieties or cultivars of the species Brassica oleracea (the cabbages): broccoli (Sp. brécol or brócoli), cabbage (Sp. col, berza, or repollo), cauliflower (Sp. coliflor), kale (Sp. col rizada or repollo rizado).[2]

Let us look now at the botanical name of the horseradish plant, Armoracia rusticana. The genus name Armoracia comes from the Latin word armŏrăcĭa, which meant ‘horseradish’ (variants of this name are armŏrăcĕa and armŏrăcĭum). It is not clear what the source of this word is. Some say it is a loan from Ancient Greek and others a loan or from a Celtic language. Lat. armŏrăcĭa is the original source of the Spanish word remolacha ‘beet’ (beetroot in British English), a very different species of plant, which Corominas thinks came into Spanish from Italian ramolaccio, which is used in this language for both ‘radish’ and ‘horseradish’ (not for ‘beet’). The loanword remolacha replaced the older word betarraga in some dialects of Spanish, though the latter is still used in southern Spain and in American Spanish. (Sp. betarraga was a loanword from French betterave, formed from bette ‘Swiss chard’, Sp. acelga, and rave ‘turnip’, Sp. nabo.)

As for the second part of the horseradish species name, rusticana, this is the feminine form of Latin rūsticānus ‘rustic’, a variant found in Cicero of the word rūsticus ‘of the country, rural, rustic’, much like this word’s antonym urbānus ‘urban’ was derived from the noun urbs ‘city’ by means of the adjectival suffix ‑ān‑ (cf. Part I, Chapter 8). The word is ultimately derived from rūs ‘countryside, farm, village’ (genitive: rūris, accusative: rūs; full root: rūr‑; a word that descends from Proto-Indo-European *rewh₁- ‘free space’, which is also the source of Eng. room). Another adjective derived from this noun was post-classical rūrālis ‘of or belonging to the country, rural, rustic’, source of Eng. rural [ˈɹuɹ.əɫ] and Sp. rural [ru.ˈɾal].

As we mentioned earlier, there was an earlier botanical name for the horseradish plant, the one given to it by the father of modern classification, 18th century Swedish naturalist and botanist Carl Linnaeus, who created the binomial nomenclature and taxonomy of organisms (plants and animals, botanical and zoological nomenclature) that we have seen exemplified in this chapter.[3] In 1753, Linnaeus gave the horseradish plant the name Cochlearia armoracia, but in 1800, this plant was reclassified as belonging to the genus Armoracia by Gaertner, Meyer, & Scherbius. The word Cochlearia is a New Latin one, formed from Latin cochlear ‘spoon’ and the suffix ‑ia, a name that is motivated by the shape of the leaves of plants in this genus.[4]

[1] A horse mushroom is ‘a species of edible mushroom, Agaricus arvensis, larger and coarser than the common mushroom’ (OED). Horse-parsley is ‘a large-leaved umbelliferous plant, Smyrnium Olusatrum’ (OED).

[2] Other vegetables in this species are Brussels sprouts (Sp. coles de Bruselas), Chinese cabbage (Sp. repollo chino or col de China). Kale is also known as collard, borecole, cole, or colewort. These words can refer to the same or to different varieties of the species Brassica oleracea, in particular var. acephala (lit. ‘headless’), since these varieties of cabbage  do not have a heart but rather long edible leaves, known sometimes as collard greens (Sp. berza, col forrajera, among other names). The word kale was originally a variant of the word cole. The word cole is now mostly archaic, except in the compound coleslaw in the US (also spelled cole slaw and cole-slaw), which is the name of ‘a salad of finely shredded raw cabbage and sometimes shredded carrots, dressed with mayonnaise or a vinaigrette’ (AHD). The name coleslaw is an 18th century calque from Dutch koolsla. The word cole was used before for plants in this species, in particular cabbage, kale, and rape. The word cole comes ultimately from Lat. caulis ‘stem, cabbage’, which is also the source of patrimonial Sp. col. The word berza is common in Spain for this vegetable. It comes from Vulgar Latin vĭrdĭa, from Classical Latin vĭrĭdĭa ‘green things, vegetables’, neuter plural form of Latin vĭrĭdis ‘green’ (vĭrdis in Vulgar Latin, the source of Sp. verde ‘green’).

[3]  Linnæus wrote many of his scientific works in Latin, as was common at the time. Linnæus is itself a Latin adaptation of the Lind family name, meaning ‘linden, lime tree’, one that was adopted by Linnæus’s father, Nicolaus (Nils) Ingemarsson, as a family name (Linnæa in the feminine). Linnæus’s family spoke Latin at home and it is said that he learned Latin before he learned Swedish. Linnaeus signed his works written in Latin as Carolus Linnaeus, Carolus being the Latin rendering of his name Carl.

[4] The word cochlear (also cochleare or coclear, among other possibilities) was originally referred to a tool for extracting snails. This is obvious in the name of the instrument, which was originally an adjective derived from cochlea ‘snail, snail-shell’ by means of the adjective forming suffix ‑ār‑(is). This Latin noun is a loanword from Ancient Greek κοχλίας (kokhlías) ‘spiral, snail shell’. This Latin word is the source of patrimonial Sp. cuchara ‘spoon’. Eng. cochlear is an adjective that means ‘of or pertaining to the cochlea’ (Sp. coclear, de la cóclea). The noun cochlea (Sp. cóclea) refers to ‘a spiral-shaped cavity of the inner ear that resembles a snail shell and contains nerve endings essential for hearing’ (AHD).

[This entry is taken from a chapter of Part II of the open-source textbook  Spanish-English Cognates: An Unconventional Introduction to Sp...