The English word clove refers to ‘an evergreen tree ([botanical name:] Syzygium aromaticum) native to the Moluccas and widely cultivated in warm regions for its aromatic dried flower buds’ and to the ‘flower bud of this plant, used whole or ground as a spice’ (AHD). The clove buds are harvested before they open and dried. They are used either whole or ground as a spice in cooking, though ground cloves soon lose their flavor. Cloves are used in small quantities due to their strong flavor, which comes primarily from the aromatic compound eugenol, an essential oil also found in nutmeg and cinnamon, for example. This plant has also been used for medicinal purposes, such as toothache pain and for inflammation more generally. Clove used for health purposes typically comes in the form of clove oil, which is eugenol extracted and concentrated from the plant. Finally, cloves are also used mixed with tobacco and other ingredients in cigarettes known as kreket or clove cigarettes that are common in Indonesia. 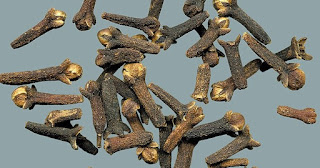 
[1] The noun pink is used for ‘various species of Dianthus (family Caryophyllaceæ)’, especially Dianthus plumarius and ‘with qualifying words’ such as clove-basil, clove-brown, and clove-pink, it is used to refer ‘to other species of Dianthus, and to other plants allied to or resembling the pink’ (OED). The origin of this word pink is unknown, though there are various theories.
[2] The source of the English word carnation for ‘the cultivated varieties of the clove-pink (Dianthus caryophyllus)’ is not totally clear. Some think it comes from Lat. carnātĭo ‘fleshiness, corpulency’ (regular stem: carnātĭōn‑), derived from the noun caro (gen. carnis, acc. carnem) ‘flesh, meat; flesh of a fruit; etc.’ (cf. Sp. carne ‘flesh, meat’, derived from the accusative form of the Latin word carnem).  Eng. carnation could also come indirectly from the Italian descendant of this Latin word, carnagione, which meant ‘the hew or color of ones skin and flesh’, after a typical color of this flower. The OED, however, thinks that Eng. carnation most likely comes from Lat. coronation: ‘Some 16th cent. authors give one form of the name as coronation, apparently from its 16th cent. specific name, Betonica coronaria, in allusion to its use in chaplets (compare campion n.2), or from ‘the floures…dented or toothed aboue..like to a littell crownet’ (Lyte). On the other hand, Turner calls the plant an incarnacyon, Lyte has carnation as well as coronation, and Gerarde expressly identifies it with the colour ‘carnation’. Prior takes coronation as the original form, and Britten and Holland think his opinion ‘probably correct’’ (OED). The reason for this name would be that carnations were one of the flowers used in flower garlands used in Greek ceremonial crowns.
[3] This other sense of the English word nail, namely ‘fingernail’ or ‘toenail’, is uña in Spanish. This word comes from Lat. ungula ‘claw, hoof, talon’, which is itself derived from Lat. unguis ‘finger/toe nail’; cf. Eng. ungulate ‘a hoofed mammal’, a technical term in Zoology.