The word cinnamon refers to ‘the dried aromatic inner bark of certain tropical Asian trees in the genus Cinnamomum, especially C. verum and C. loureirii, often ground and used as a spice’ (AHD). In addition, the name cinnamon also refers to the the plant itself from which bark is extracted, the cinnamon tree. This spice comes in two main forms, stick and powder (Sp. canela en rama and canela en polvo). It is used mostly in baking (confectionery, desserts, pastries), but some varieties are also used as a spice in meat dishes and curries, for example. Cinnamon tea is also a popular drink in some places (Sp. té de canela). The bark from these plants, and in some cases the leaves as well, has been used by humans for close to 5,000 years, both as medicine and as a condiment. In the English-speaking world is associated with things such as cinnamon rolls and in the Spanish-speaking world with rice pudding (Sp. arroz con leche), which is typically served with cinnamon sprinkled on top.

The word cinnamon [ˈsɪn.ə.mən] was borrowed in the 14th century from Old French cinnamone, itself a loanword from Latin cinnamōmum, from Ancient Greek κινναμωμον (kinnamōmon). An early spelling of this word in Middle English was synamome. Actually, there were several Latin variants of this spice’s name in Latin, one of which was cinnamon, from Gk. κίνναμον (kínnamon), which presumably influenced the final form of the English word. The Greek word is ultimately a loanword from Phoenician, an ancient Semitic language, and is cognate with Hebrew קִנָּמוֹן (qinnāmōn). 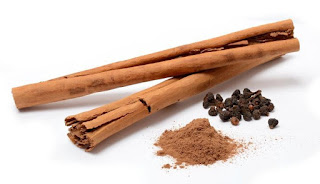 The word for ‘cinnamon’ in Spanish is canela, a word unrelated to Eng. cinnamon. It is a loanword from Old French canele (cf. Modern French cannelle), which was a loanword from Italian cannella (same in Modern Italian), which was a diminutive of the word canna ‘reed, cane’ (cognate with Sp. caña), from Latin canna (same meaning), from Ancient Greek κάννα (kánna) ‘reed’, a loanword from a Semitic source, probably Akkadian 𒄀 (qanû) ‘reed’, related to Sumerian 𒄀𒈾 (gi.na) ‘reed’.[1] This name was given to the spice because of the similarity of the rolled-up cinnamon bark to the hollow stem of a reed or cane. Sp. canela is attested in the 13th century, whereas its French and Italian cognates are attested in the 12th century. The name of the cinnamon tree in Spanish is canelo or árbol de la canela.

The cinnamon tree is an evergreen tree with oval leaves from the Lauraceae (laurel) family. The genus name of this plant is Cinnamomum, which comes from one of the names of the plant in Latin. There are more than 250 species of this genus and they are found in different Asian countries, primarily China, Indonesia, Vietnam, Sri Lanka, and Madagascar. Next, we will look at the major ones that are used as condiments.

The first one is Cinnamomum verum (or Cinnamomum zeylanicum), which is known as true cinnamon, Sri Lanka cinnamon or Ceylon cinnamon (Ceylon is the former name of Sri Lanka), cf. Sp. canela de Ceilán. The word verum is the neuter form of the Latin adjective vērus ‘true’, thus the full name means literally ‘true cinnamon’. This is the sweetest and mildest type, as well as the most sought after and expensive one. The bark is also the thinnest and most brittle.

Cinnamomum cassia is known as cassia or Chinese cinnamon (Sp. canela china). It is native to southern China and it is also produced in Vietnam. It is considered to be ‘an inferior kind of cinnamon,… thicker, coarser, less delicate in flavor, and cheaper than the true cinnamon’ (OED). Cassia sticks are much harder than Sri Lanka cinnamon and are usually made of just one thick layer of bark, whereas Ceylon cinnamon sticks have more layers and is much easier to grind. However, cassia is the most common commercial type of cinnamon in many countries, such as in the United States.

The word cassia comes from Latin cassia, another word for ‘cinnamon’, besides cinnamōmum and cinnamon. This word also comes from Ancient Greek, namely from κάσια (kásia), which comes from Hebrew קציעה‎ (q'tsīʿāh) ‘a bark resembling cinnamon, but less aromatic’ (OED). Ultimately, it seems, this word comes from Aramaic, a Semitic language related to Hebrew and Arabic.

The English word cassia has other meanings besides the one we just saw. It is also the name of another type of plant, namely ‘any of various chiefly tropical or subtropical trees, shrubs, or herbs of the genus Cassia in the pea family, having pinnately compound leaves, usually yellow flowers, and long, flat or cylindrical pods’ (AHD). Obviously, the genus Cassia is unrelated to the Cinnamomum genus. In Spanish, the name casia is used only for this other type of plant, not for the cinnamon plant.

Cinnamomum loureiroi (earlier: Cinnamomum loureirii) is known as Saigon cinnamon, Vietnamese cassia, or Vietnamese cinnamon (in Spanish, the main name is canela de Saigón; cf. Portuguese: canela-de-saigão). This species has a high essential oil content and, thus, it is more sought after and more expensive than cassia. It is grown primarily in the central highlands regions of Vietnam. The species is named after botanist João de Loureiro.

Cinnamomum burmannii (sometimes mistakenly spelled Cinnamomum burmanni and also known as Cinnamomum mindanaense) is yet another variety of cinnamon, popularly known as Korintje, Padang cassia, Batavia cassia, or Indonesian cinnamon (Sp. canela de Indonesia). This plant is native to Southeast Asia and Indonesia, in particular West Sumatra and Indonesia’s western Jambi province, though this tropical plant has been also introduced in subtropical areas, such as Hawai’i. From this plant comes the cheapest form of cinnamon. During the Vietnam War, supplies of Saigon cinnamon were interrupted in the West and Indonesian cinnamon substituted for it in part. The species name burmannii comes from the last name of the 18th century Dutch botanist Nicolaus Lorenz Burmann and it is not related to the country of Burma (Sp. Birmania).[2]

Cinnamomum citriodorum is commonly known as Malabar cinnamon. It is also from Sri Lanka and from the Western Ghats region of southern India. It has a distinctive lemon grass smell, and hence its species name citriodorum, a New Latin word that means ‘lemon-scented’, since it is derived from Latin citrus, the name of the citrus or citron tree, and Latin odor ‘smell’ (citr-i-odor-us), cf. Fr. citron ‘lemon’ and Eng. citrus ‘a tree of a genus that includes citron, lemon, lime, orange, and grapefruit. [Genus Citrus.]’ (COED). (Several species of plant have this adjective in their botanical name, e.g. the botanical name of lemon basil is Ocimum citriodorum and of lemon thyme or citrus thyme is Thymus citriodorus.)

Let us finish our review of different species of the genus Cinnamomum by looking at two species of this genus found in India, namely Cinnamomum tamala and Cinnamomum malabatrum. Although the bark of these plants is sometimes used for cooking, the part of the plants that is most commonly used is its leaves. The leaves of Cinnamomum tamala are commonly known as Indian bay leaves, although they are unrelated to real bay leaves (cf. §47.3.4 above). They are used in the cuisines of India, Nepal, and Bhutan, especially in the Moghul cuisine of North India and Nepal. They are also used in tsheringma tea in Bhutan. Other names for different parts of this plant used in cooking and medicine are Malabar leaf, Indian bark, Indian cassia, and malabathrum (also malabathron or malobathrum). This latter word is the name of ‘(a perfumed ointment prepared from) an aromatic leaf mentioned by ancient writers’ (SOED) and it is thought that the leaves in question came from the Cinnamomum tamala tree. Cinnamomum malabatrum is also known as wild cinnamon, country cinnamon, as well as Malabathrum.

The origin of both tamala and malabatrum must be found in the Latin name mālabathrum or mālobathrum, which was a loanword from Ancient Greek µᾱλάβαθρον (mālabathron) or µᾱλόβαθρον (mālobathron), which came from Sanskrit तमालपत्त्रम् (tamālapattram), a compound formed of  tamāla ‘dark tree’, the name of various trees, such as various species of Cinnamomum, including Cinnamomum tamala, and pattra ‘leaf’. Note that the Greeks removed the first part ta‑ of the Indian name, which was mis-analyzed as the Greek definite article.[3]

[1] The Akkadian and Sumerian words are given in its original cuneiform format (Sp. cuneiforme). Cuneiform writing refers to ‘a character or characters formed by the arrangement of small wedge-shaped elements and used in ancient Sumerian, Akkadian, Assyrian, Babylonian, and Persian writing’ (AHD). The word cuneiform was formed in French in the 16th century, from the Latin root cuneus ‘wedge’ (cf. Sp. cuña ‘wedge’).

[2] The official name of the country in English is Myanmar since 1989, though those who oppose the military government in place since that time continue to call it Burma; the names in the Burmese language are, respectively, မြန်မာ (Myanma), pronounced [mjəmà], and ဗမာ (Bama), pronounced [bəmà].

[3] The word malabatrum is not related to the word Malabar in the name of the Malabar Coast, ‘a region of southwest India bordering on the Arabian Sea and bounded on the east by the Western Ghats’ (AHD). (The Western Ghats are ‘a low mountain range in W India, along the W margin of the Deccan plateau and bordering on the Arabian Sea. ab. 1000 mi. (1600 km) long’, RHWU.) This region is currently part of the Indian states of Karnataka and Kerala. The word Malabar, which came into English through Portuguese in the 16th century, comes ultimately from Arabic Malaybār, Manībār, or Mulaybār, for the Malabar Coast or its inhabitants, a word that comes from a Dravidian first element (cf. Tamil malai and Malayalam mala) and the Persian word bār ‘region, country’.