The plant known as coriander or cilantro in English is ‘an aromatic annual Eurasian herb (Coriandrum sativum) in the parsley family, having parsley-like leaves and umbels of tiny white to pinkish flowers. It is cultivated for its edible fruits, leafy shoots, and roots’ (AHD). The word coriander is also used for ‘the fresh young leafy plantlets of this herb, used in salads and various dishes as a flavoring and garnish’ (AHD). Other names for this second sense, the leaves used in cooking, are coriander greens, fresh coriander, coriander herb, Chinese parsley, dhania and, in North America (primarily the US), cilantro, a word borrowed from Spanish in the early 20th century. Finally, the word coriander is also used for ‘the seed-like fruit of this plant, used whole or ground as a flavoring for food and as a seasoning, as in curry powder’ (AHD). 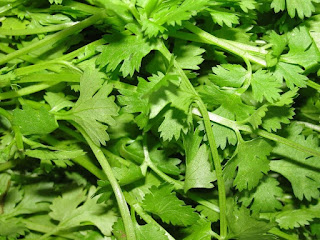 The plant is probably native to what is now Iran and it grows wild in southern Europe, northern Africa, and southwestern Asia. It is commonly used in the cooking of many cultures, including Asian and Mexican, for example. The botanical name for this plant is Coriandrum sativum. Coriandrum is a genus of herbs in the Apiaceae or Umbelliferæ family (also known as the celery, carrot, or parsley family). In addition to the cultivated species, Coriandrum sativum, there is a wild species, namely Coriandrum tordylium.

The word coriander, pronounced [kɔ.ɹi.ˈæn.dəɹ] (US) or [kɒ.ɹi.ˈæn.dəɹ] (UK), is a 13th or 14th century loanword from French coriandre, which was a loan from Lat. coriandrum, the name for this plant and, now, also the scientific name of the genus to which this plant belongs. Latin itself borrowed this word from Greek κορίανδρον (koríandron), though there was a more common version of this word, namely κορίαννον (koríannon). The source of the Greek name is not clear. Some think it is of foreign origin (a borrowing from a non-Indo-European language), whereas others think it is derived from the word κόρις (kóris), the name of a bed bug which would have been given to the plant because of its fetid smell of the unripe fruit of this plant.

There are also several names for this plant in Spanish: cilantro, coriandro, culantro europeo, perejil chino, and dania. The name cilantro [sɪ.ˈlæn.tɹoʊ̯] in English is used mostly in the United States and, as we just mentioned, it is a recent borrowing from Spanish cilantro, dating back to the early 20th century. The Spanish word cilantro is a 17th century alteration of the traditional name for this plant, which was culantro, itself a popular alteration of the Late Latin version coliandrum of the Latin name coriandrum, displaying some unusual sound changes. The variant culantro is first attested around the year 1100 and it is the form preferred for this plant in many Spanish-speaking countries, though there is another plant that is native to the Americas that has received this name as well (see below).

Fresh coriander leaves are very common in the cuisine of Spanish-speaking countries. It is an essential ingredient of Mexican chutney, salsa verde, and guacamole, for example. Cilantro leaves are never cooked, since cooking destroys its flavor, and it shouldn’t be dried or frozen either, for the same reason. Some countries besides Mexico where cilantro is very commonly used are Panama, Colombia, Ecuador, Peru, Chile, Paraguay, Venezuela and parts of Spain.

Coriander seeds are typically used dried in cooking. They can be ground or crushed. They are used in Indian cooking, for instance, where they are an ingredient of Indian curry powder. They are also used in the production of some Belgium wheat beers, German sausages, Russian rye bread, and in native dishes of Ethiopian and Arab cuisine. Finally, the ground seeds are added to coffee to make it aromatic in the Middle East. 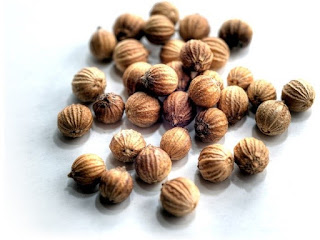 We have already mentioned the source of the name coriandrum. As for the second word in the botanical species name, sativum, it comes from the neuter form of the Latin adjective sătīvus ‘(that is) sown or planted’ (as opposed to agrestis or silvestris ‘that grows wild’). The adjective sătīvus is derived from the stem săt‑ of the passive participle sătum of the verb serĕre ‘to sow, plant, etc.’, by means of the first-second declension adjective-forming suffix ‑īv‑(us). This verb has left no descendants in Spanish, where the verb ‘to sow’ is sembrar, a patrimonial descendant from Lat. sēmināre, another word meaning ‘to plant’ and ‘to seed’. Curiously, however, the Latin verb serĕre (root: ser‑) is related to the English verb sow, since they both descend from the Proto-Indo-European root *se‑, which is also found in many other English words, such as semen, season, and seed (and also in the Spanish word sembrar that we just saw, and related Spanish words, such as semilla ‘seed’. Finally, the adjective sătīvus has been borrowed into English and Spanish as the rare adjectives Eng. sative and Sp. sátivo/a, both meaning ‘cultivated’, though the English word is now obsolete.

The early variant culantro of this plant’s name is used in parts of the Americas, in places such as Perú and Honduras, for the same plant cilantro we have been discussing. In other countries, however, the word culantro is reserved for a different plant, which is native to the tropics of the Americas. The botanical name of this other plant is Eryngium foetidum, and it goes by a number of names in Spanish, depending on the region: sacha cilantro (Peru), cilantro de monte (Venezuela), chillangua (Ecuador), cimarrón, culantro, alcapate, cilantro de tierra, and recao, among others. In English, this plant is known primarily as culantro, shadow beni, Mexican coriander, bhandhania, or long coriander, though it is not well-known in North America. 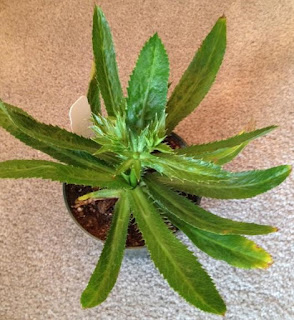 This culantro plant (Eryngium foetidum) is also from the Apiaceae family, like coriander (Coriandrum sativum), but from a different genus. It has spiny appearance and a stronger aroma and taste as coriander. This plant is native to Mexico, Central America, and South America, and it is not well known in the United States outside immigrant communities from those regions. According to Wikipedia, this plant

is widely used seasoning, marinating and garnishing in the Caribbean, particularly in Cuba, Dominican Republic, Puerto Rico, Trinidad and Tobago, Panama, Guyana, Suriname, and in Peru’s Amazon regions. It is also used extensively in Cambodia, Thailand, India, Vietnam, Laos, and other parts of Asia as a culinary herb.[iv]

For example, fresh culantro leaves are an important ingredient of sancocho, a thick soup containing meat, plantain, yucca, and other ingredients that is common in South America and the Caribbean (it has been called the national dish of countries such as Puerto Rico, Dominican Republic, and Panama). In addition, culantro has been used in traditional medicine (ethnomedicine) for many ailments, including problems with the digestive system.

Finally, let us look at the source of the botanical name of American Eryngium foetidum. The genus name Eryngium was given to umbelliferous plants (from the family Apiaceae or Umbelliferæ family) resembling thistles. It comes from Latin eryngium, the name of some type of thistle, which comes from Ancient Greek ἠρύγγιον (ērúngion), of uncertain origin. As for the second part of the species name, foetidum, this is much clearer, since both English and Spanish have descendants of this word, namely Eng. fetid (earlier fœtid) and Sp. fétido/a. Lat. foetidum is the neuter form of the adjective fētĭdus or foetĭdus that meant ‘that has an ill smell, stinking, fetid’ (L&S).
[i] Source: “Canelle Cinnamomum burmannii Luc Viatour” by I, Luc Viatour. Licensed under CC BY-SA 3.0 via Wikimedia Commons - https://commons.wikimedia.org/wiki/File:Canelle_Cinnamomum_burmannii_Luc_Viatour.jpg#/media/File:Canelle_Cinnamomum_burmannii_Luc_Viatour.jpg
[ii] Source: https://commons.wikimedia.org/wiki/File:Coriander.jpg (2018.09.30)
[iii] Source: https://commons.wikimedia.org/wiki/File:EryngiumfoetidumMM.jpg (2018.09.30)
[iv] Source: https://en.wikipedia.org/wiki/Eryngium_foetidum (2018.09.30)