Basil is the name of an ‘an aromatic plant of the mint family, native to tropical Asia, used as a culinary herb’ (COED).[i] This name is pronounced [ˈbeɪ̯.zəl] in (most) North American varieties of English and [ˈbæ.zəl] in the UK, Australia (also in Canada). Basil is probably originally native to India. There are several species in the genus (Ocimum) of the Lamiaceae or Labiatæ (mint) family, which contains more than 200 genera and around 7,000 species, that go by the name basil. The most common one is sweet basil (Ocimum basilicum) also known as great basil or, in some English-speaking countries, Saint-Joseph’s-wort (not to be confused with Saint John’s Wort or Hypericum perforatum). 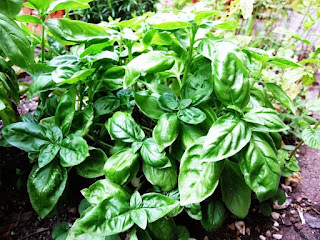 The word basil came into English in the early 15th century from Old French basile, from Medieval Latin basilicum, the word for ‘basil’ (and also for ‘royal robe’), which was a loan from Ancient Greek βασιλικόν (basilikón), which meant ‘royal, kingly, majestic’, the neuter form of the adjective βᾰσῐλῐκός (basilikós).[1] Actually this Greek name was short for βασιλικόν φυτόν (basilikón phutón) ‘royal plant’. This adjective was derived from the noun βασιλεύς (basileús) ‘chief, master; king, lord’, a word of unknown origin (see below).

Two cognate words that are related to this word are Sp. basílica [ba.ˈsi.li.ka] ~ Eng. basilica [bə.ˈsɪ.lɪ.kə], which refer to certain types of churches, according to their shape or, in the Catholic tradition, to ceremonial privileges granted to the church by the pope. In Ancient Rome, a basilica was ‘a public building … having a central nave with an apse at one or both ends and two side aisles formed by rows of columns, which was used as a courtroom or assembly hall’ (AHD). Eventually, this word came to be used in the Christian tradition for ‘a Christian church building of a similar design, having a nave with a semicircular apse, two or four side aisles, a narthex, and a clerestory’ (AHD). In the Catholic Christian tradition, starting in the 18th century, a basilica is, as we said, ‘a church that has been accorded certain privileges by the pope’ (AHD).[2] Latin borrowed this word from Ancient Greek βασιλική (basilikḗ), which was short for βασιλικὴ στοά/οἰκία (basilikḕ stoá/oikía), meaning ‘royal hall’ or ‘palace tribunal chamber’.

A related pair of cognates, familiar to readers of the series Harry Potter, is Eng. basilisk ~ Sp. basilisco. These words come from Ancient Greek βασιλίσκος (basilískos), a diminutive of βασιλεύς (basileús), which thus meant ‘little king’. In European bestiary mythology, this came to be the name of ‘a legendary serpent or dragon with lethal breath and glance’ (AHD). Much later, the term came to be used to refer to ‘any of various tropical American lizards of the genus Basiliscus, characterized by a crest on the head, back, and tail and the ability to run on the hind legs’ (AHD), in particular ‘a long, slender Central American lizard, the male of which has a crest running from the head to the tail. [Basiliscus plumifrons.]’ (COED).

The word for ‘sweet basil’ in Spanish is albahaca or albaca, a word of Arabic origin. It comes from Andalusian Arabic الحباقة (al-ḥabāqa), from Arabic حبق (ḥábaq) ‘basil’ (cf. Port. alfavaca). In the word albahaca we can see the prefixed Arabic definite article al‑ added to the Arabic word ḥábaq, something we find in many Spanish borrowings from Arabic. Notice also a transposition or metathesis of two consonants or, possibly, syllables.

The Spanish term albahaca can also refer to a different species of this genus, also known as albahaca de monte, whose botanical name is Ocimum campechianum. It is found in Mexico, Central America, South America, the West Indies, and Florida. This plant has a pungent flavor and it is used in ethnic medicine (in Brazil, it is called alfavaca). There does not seem to be a popular name for this plant in English, other than the botanical name.

Finally, there is another plant that goes by the name albahaca in Spanish, namely one with the botanic name Celosia virgata of the genus Celosia L., of the Amaranthaceae family. It is a perennial subshrub found in Puerto Rico and the Virgin Islands. There is no popular name in English for this plant either, other than the botanical name or the Spanish name albahaca. The word albahaca appears in one of the major English dictionaries, namely Webster's New Third International Unabridged Dictionary, but there it is shown as a loanword for Spanish but only for ‘any of several aromatic plants of the family Labiatae especially of the genus Ocimum’, not the Puerto Rican kind.

There are other common varieties of basil. One is lemon basil, a hybrid found in northeastern Africa and southern Asia. Its botanical name is Ocimum citriodorum and it is known in Spanish as albahaca de limón. Another variety is Thai basil, a variant of sweet basil found in Southeast Asia, whose botanical name is Ocimum basilicum var. thyrsiflora. It is very commonly used in Thai cuisine. It is called โหระพา (ohrabā, Romanized as horapha) in the Thai language.

The third additional variety of basil is commonly known as holy basil, an aromatic perennial plant of the Lamiaceae family found in the Indian subcontinent and Southeast Asia. This plant is also known in both in English and Spanish as tulsi or tulasi after its Hindi name tūlsī, from Sanskrit tulasī. This plant has two synonymous botanical names: Ocimum tenuiflorum and Ocimum sanctum. It is a sacred plant in the Hindu religion, since it is seen as a manifestation of the goddess Tulsi, a major worshipper of the god Vishnu, one of the major Hindu deities (two major avatars of this god are Rama and Krishna). This plant is used in used to make herbal tea and is sometimes ground as a powder and used in Ayurveda, the traditional Indian system of medicine. The leaves of holy basil are also commonly used in Thai cuisine. The Thai name for tulsi is กะเพรา (kaebrā, Romanized as kaphrao), which should not be confused with which Thai basil (see above), or with another variety of basil, namely Thai lemon basil แมงลัก (æmŋlạk, Romanized as maenglak).

The English male personal name Basil, fairly common in England, is related to this word, since it is derived from Ancient Greek βασιλεύς (basileús) ‘king, lord, etc.’ (see above). There is a cognate of this name in Spanish, namely Basilio, which is quite rare nowadays. In the Christian tradition, these names are derived from the names of saints, such as Saint Basil the Great (Basil of Caesarea, 4th century), Basil the Elder (4th century), and Basil the Confessor (8th century). Two Byzantine emperors were also named Basil, as well as four Russian czars.

[1] The word basilicon has been used in English for ‘several ointments supposed to possess ‘sovereign’ virtues’ (OED). In Spanish too, basilicón or ungüento basilicón is the name applied to a suppurative ointment made with black pitch, Sp. ungüento supurativo compuesto con pez negra (MM).