Caper is the name of ‘a cooked and pickled flower bud of a bramble-like southern European shrub, used in pickles and sauces’, as well as of ‘the shrub from which capers are taken’ (COED). The plant, which is native to the Mediterranean region, is also known as caper bush or Flinders rose. Its botanical name is Capparis spinosa, a member of the Capparaceae family, whose taxonomic status is controversial.[1] Both the plant’s flower buds—the capers—and the plant’s fruit—the caper berries—are consumed, both typically pickled in a salt or salt and vinegar solution. The flower buds are used as seasoning or garnish. 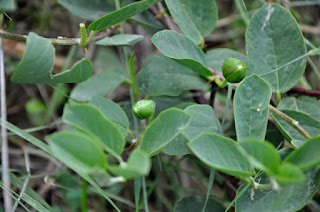 The English word caper [ˈkʰeɪ̯.pəɹ] comes from Latin cappăris (the genitive is also cappăris), which was the name of both the caper bush and its fruit, the caper. As we can see, this Latin word has given the name to the genus Capparis in botanical New Latin. This Latin word was a loanword from Ancient Greek κάππαρις (kápparis). The word came into English around the turn of the 15th century, presumably from Latin. The French equivalent is câpre (originally caspres), which is supposedly a late 15th century loanword from Italian cappero. 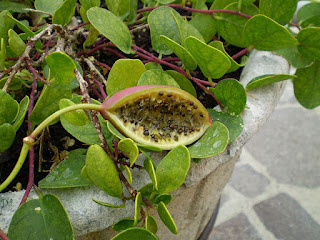 The Spanish name for the caper berry and the caper bush is alcaparra [al.ka.ˈpa.ra]. This word is obviously related to Lat. capparis, but it came into Spanish with Arabic as the intermediary, since it comes from Andalusian Arabic الكبر (alkappárra), as can be seen by the tell-tale initial al‑ found in many words of Arabic origin in Spanish. The word for ‘caper’ in modern-day Arabic (without the article) is an obviously related word, which comes in several variants, such as كَبَر (kabar), كَبَّار‎ (kabbār), and قَبَّار‎ (qabbār). It is not clear where Arabic got the word from. It is possible that Arabic too got it from Greek or, more likely, that both Arabic and Greek got it from some other language in the eastern Mediterranean region in ancient times.

Capers are typical of Italian cuisine, in particular southern Italian and Sicilian cuisine. They are used in salads, pasta salads, meat dishes, and pasta sauces (Wp). Capers are also often used in tartar sauce (spelled tartare sauce in the UK), which is ‘a thick cold white sauce made from mayonnaise, chopped onions and capers, usually eaten with fish’ (OALD). Not all versions of tartar sauce have capers or the same ingredients for that matter, however, but in the United States, tartar sauce typically has ‘chopped pickles or prepared green sweet relish, capers, onions (or chives), and fresh parsley’, as well as hard-boiled eggs and olives (Wp). This sauce was named in France in the 19th century after the Tatars (Sp. tártaros), a Turkic people living today mostly in Tatarstan, a republic of the Russian Federation. English got the name of the sauce from French sauce tartare, since the sauce is said to have originated in France, though its antecedents are not known. The name for this type of sauce is attested only since the 19th century (mayonnaise itself was not invented until the 18th century.) However, there doesn’t seem to be any connection between the sauce and the Tatar people and thus, the name of this sauce is a misnomer. The name probably came about because this sauce often accompanies deep-fried breaded dishes of the type common in Eastern Europe and because it was common in Europe at the time to confuse the Tartar people with the Huns, who invaded Europe in the 4th and 5th centuries from the east and who supposedly left behind some influence on Eastern European cuisine.

As in the case of bay (see above), there is more than one word caper in English that are unrelated and, thus, homonyms. Besides the caper we just saw that names the condiment, there is a second noun caper means ‘a playful leap or hop’ or ‘a frivolous escapade or prank’ (AHD). The OED defines its main meaning as ‘a frolicsome leap, like that of a playful kid; a frisky movement, esp. in dancing; said also of horses; fig. a fantastic proceeding or freak’. There is also a derived homonymous verb to caper that means ‘to skip or dance about in a lively or playful way’ (COED). The noun caper also has an additional slang meaning in English, namely ‘An illegal plot or enterprise, especially one involving theft’ (AHD). These are not everyday words, but they have an interesting story.

This second noun caper started as an abbreviation of the noun capriole, a word used in the art of horsemanship and horseback riding (Sp. equitación) for ‘a movement performed in classical riding, in which the horse leaps from the ground and kicks out with its hind legs’ (COED). This word is a late 16th century loanword from French capriole (now obsolete). French itself had borrowed this word a little bit earlier from Italian capriola ‘leap, somersault’, a word derived from capriolo ‘roebuck, wild goat’, a descendant from Lat. capreolus, diminutive of Lat. caper ‘billy goat, he-goat’ (genitive: caprī; cf. Lat. capra ‘she-goat’ and Sp. cabra ‘goat’).

Spanish also borrowed this Italian word, as cabriola, changing the Italian p to b by influence of the word cabra ‘goat’. In French too, the word capriole later changed to cabriole presumably under the influence of cabri ‘kid, young goat’ (cf. Sp. cabrito/a). French cabriole now means primarily ‘leap, prancing (of an animal), cavorting, (acrobatic) somersault’. It also has the meaning of Eng. capriole in equitation and, in ballet, it means ‘a jump in which one leg is extended into the air, the other is brought up to meet it, and the dancer lands on the second foot’ (COED). English has borrowed the word cabriole from French with just that last meaning.

Most dictionaries only give us these two nouns caper. The OED, however, mentions a few more that are now obsolete. There was a word caper in English that meant ‘a privateer (also caper-vessel); the captain of a privateer; a corsair’ and, secondarily, ‘a captor, seizer’. From this noun, a verb to caper, meaning ‘to privateer’, was derived, now also obsolete. Then there is another noun caper, also spelled kaper, used in Scottish English that means ‘a piece of oatcake and butter with a slice of cheese on it’. It is a loanword from Gaelic ceapaire ‘piece of bread and butter’. In addition, the OED also mentions two other, even rarer words caper in English.
[1] Some think that there are several species of the genus Capparis, some think that there is one species with several subspecies, and some still think that plant is a hybrid of Capparis orientalis and Capparis sicula.
[i] Source: “კაპარი Capparis spinosa Kapernstrauch” by Lazaregagnidze - Own work. Licensed under CC BY-SA 3.0 via Wikimedia Commons - https://commons.wikimedia.org/wiki/File:%E1%83%99%E1%83%90%E1%83%9E%E1%83%90%E1%83%A0%E1%83%98_Capparis_spinosa_Kapernstrauch.JPG#/media/File:%E1%83%99%E1%83%90%E1%83%9E%E1%83%90%E1%83%A0%E1%83%98_Capparis_spinosa_Kapernstrauch.JPG