[This entry comes from Chapter 10, "Inspiration and Perspiration", of Part II of the open-source textbook Spanish-English Cognates: An Unconventional Introduction to Spanish Linguistics.]

Many are familiar with Thomas Edison’s dictum, mentioned in 1903, that “genius is one percent inspiration, ninety-nine percent perspiration”, by which he meant that inspiration is not worth much without a lot of follow-up work.[i] As we can see in the take on that saying by Grant Snider in Figure 119 below, there are more potential actions, events, and states associated with genius. 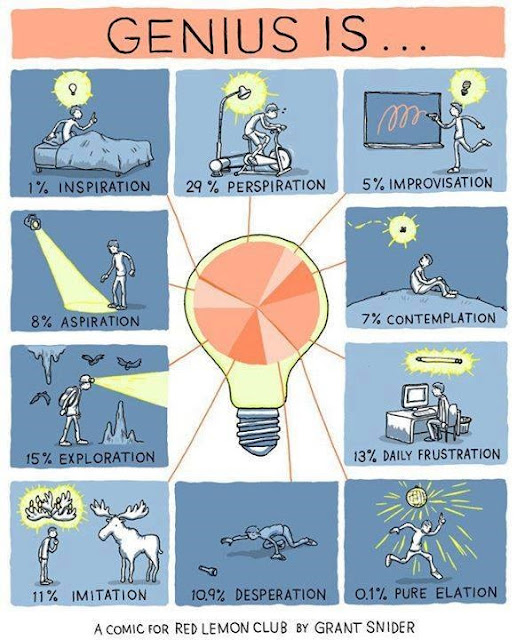 We cannot fail to notice the very common Latinate ‑ation that all the names on this figure share. Most of these nouns that end in ‑ation have cognates in Spanish that end in ‑ación. All these nouns are descended from Latin verbs, which were borrowed by English and Spanish. Because these nouns were borrowed from written Latin, they change very little along the way and the English and Spanish descendants are very obviously cognates. In Table 159 below you can see the nouns and verbs in question.

Table 159: Some English nouns in -ation and related verbs

As you can see, these English words in ‑ation have their source in Latin words in ‑ātĭo—or, more accurately, in the accusative form of the word, which ended in ‑ātĭōnem. Also, for the most part, these words have Spanish cognates as we can also see. When they do not, in the case of perspiration and elation, it is because Spanish did not borrow those words from Latin like English did. Curiously, there is an English word in ‑ation that does not have a Latin equivalent, namely improvisation. That is because this word was created not in Latin but in a modern European language from a cognate of the verb improvise, which was derived probably in Italian, from an adjective, probably Italian improviso, borrowed from Latin imprōvīsus ‘unforeseen, unexpected’. This adjective had been derived by prefixation of the negative prefix in‑ to the adjective prōvīsus ‘foreseen’, derived by conversion from the identical passive participle of the verb prōvĭdēre ‘to see in the distance, to foresee’, derived from the verb vĭdēre ‘to see’, source of patrimonial Sp. ver ‘to see’. Crucially, Latin did not have a verb like Eng. improvise from which a noun imprōvīsātĭo could have been derived.

In the next section, we will explore the suffix found in these nouns, including their origin and variations. In the remainder of the chapter, we will investigate the different Latin verbs and nouns in the list above and their descendants in English and Spanish.
Go to Part 2

Email ThisBlogThis!Share to TwitterShare to FacebookShare to Pinterest
Labels: suffix-ion