As we have seen, one way to classify bacteria is by their shape (§34.2.9.1). Spherical bacteria are called cocci, sing. coccus, from Greek κόκκος (kókkos) ‘grain, seed’. The word coccus (pl. cocci) by itself is used now for any spherical bacterium. Rod-shaped bacteria, on the other hand, are called băcilli, sing. băcillus ‘small staff, wand’, diminutive of Latin băcŭlum ‘stick, staff’.


The bacterium that we are going to look at in this section belongs to the genus Staphylococcus [ˌstæf.ɪ.lə.ˈkɒ.kəs] (Sp. estafilococo), or staph for short, which is of the coccus type, as its name indicates. Bacteria of the genus Staphylococcus are spherical gram-positive parasitic bacteria that usually occur in grapelike clusters, cause pus formation, and infections such as boils and septicemia. The bacteria genus name Staphylococcus is a New Latin term coined in the late 19th century (1887). The term means something like ‘spherical bacterium occurring in chains or bunches’.  It was created out of two Ancient Greek words: σταφυλή (staphulḗ) ‘bunch of grapes’ and κόκκος (kókkos) ‘grain, seed’.

There are about 40 species in the genus Staphylococcus, most of which are harmless and are found in the skin and mucous membranes of humans and other organisms. The main species that causes infection in humans is Staphylococcus aureus, named in 1884 by Friedrich Julius Rosenbach. The name is composed of the genus name Staphylococcus and the Latin adjective aureus ‘golden’ (Sp. áureo, learned), derived from aurum ‘gold’ (Sp. oro, patrimonial), which is due to its yellowish color. Because of this, it is also known as golden staph in English, in addition to its technical Latin name. In Spanish, it is also known as estafilococo áureo or estafilococo dorado. This bacterium too is part of the normal flora or microbiome of the human body and it is not always pathogenic, though there are some pathogenic strains which can cause infection when the immune system is down or when it enters certain sensitive areas of the body. It is estimated that 20-30% of humans are long-term carriers of this bacterium, though they are not necessarily infected by it.

S. aureus can cause a range of illnesses, from minor skin infections, such as pimples, impetigo, boils, cellulitis, folliculitis, carbuncles, scalded skin syndrome, and abscesses, to life-threatening diseases such as pneumonia, meningitis, osteomyelitis, endocarditis, toxic shock syndrome, bacteremia, and sepsis. It is still one of the five most common causes of hospital-acquired infections and is often the cause of wound infections following surgery. Each year, around 500,000 patients in hospitals of the United States contract a staphylococcal infection, chiefly by S. aureus. Up to 50,000 deaths each year in the USA are linked with S. aureus infections.[i] 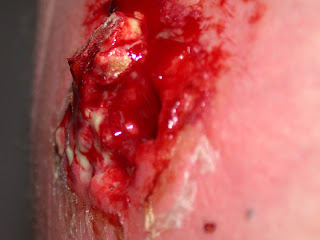 MRSA infections are typically associated with hospitals, which is where such bacteria first developed and which is where most people acquire MRSA infections. MRSA infections acquired in hospitals are known as hospital associated MRSA (HA-MRSA). More recently, two other types of MRSA are recognized according to their source: community associated (CA-MRSA), which emerged in the 1990s, and livestock associated (LA-MRSA), which has appeared in some countries. There are different strains of MRSA, which vary in part according to their source. According to the CDC, there were more than 80,000 invasive (life-threatening) MRSA infections in the US in the year 2011 which resulted in over 11,000 deaths. The good news is that the number of invasive MRSA infections and deaths in healthcare settings is on the decline, so that hospital infections for instance declined 54% between 2005 and 2011. Also, we should keep in mind that just like about a third of all healthy people carry S. aureus in their biome, two percent of the population is said to carry MRSA without resulting in infection.

The MRSA strains (Sp. cepas) of Staphylococcus aureus have become resistant to β-lactam antibiotics, which include methicillin, penicillin, oxacillin, and amoxicillin. Most recently, by 1996, strains developed that are resistant to vancomycin, one antibiotic that was still effective. The drug of choice to treat MRSA now is vancomycin, which is 49% effective. However, some strains of S. aureus have become resistant to this antibiotic as well. They are known as VRSA, which stands for Vancomycin Resistant Staphylococcus aureus. More recently, strains of MRSA have been discovered that are resistant even to both vancomycin and teicoplanin, another antibiotic used to treat S. aureus infections. These strains of the MRSA bacterium are known as VISA, which stands for Vancomycin Intermediate-resistant Staphylococcus aureus. In cases in which the strain is resistant to those antibiotics, linezolid in still effective in most cases (87%). Two other antibiotics of last resort are clindamycin [ˌklɪn.də.ˈmaɪ̯.sɪn] and ceftaroline [sɛf.ˈtæɹ.oʊ̯.lin].