As we saw when we discussed chickenpox (Sp. varicela), the term pox refers to ‘any of several viral diseases producing a rash of pimples that become pus-filled and leave pockmarks on healing’ (COED). It is a late 15th century respelling of the word pockes, plural of pocke or (Modern English) pock, which comes from Old English pocc ‘pustule, blister, ulcer, mark on the skin’. The term pox by itself has referred primarily to syphilis since the 16th century. 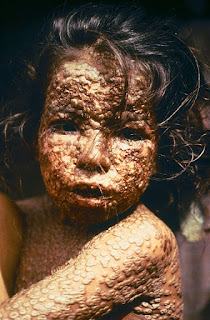 Smallpox (Sp. viruela) is the most serious of all the poxes. It is ‘an acute, highly infectious, often fatal disease caused by a poxvirus and characterized by high fever and aches with subsequent widespread eruption of pimples that blister, produce pus, and form pockmarks’, which usually leave permanent scars (AHD). The virus in question belongs to the Poxviridae family of viruses that infects humans and vertebrates more generally, as well as arthropods. There are 69 species in this family, with two subfamilies and 28 genera, four of which infect humans. The smallpox virus, also known as variola, is from the Orthopox genus, just like the cowpox virus. There are two major types of smallpox, the more common (90%) and virulent variola major (Sp. viruela mayor) and the less common and less virulent variola minor (Sp. viruela menor). Those who have contracted variola minor, or even cowpox as we shall see, acquire immunity to the more virulent variety.

As we just saw, the technical term for the smallpox virus is variola [vǝ.ˈɹaɪ̯.ǝl.ǝ], which has also been used in English as a medical term for the smallpox disease since the late 18th century. The word variola is a New Latin medical term that comes from Vulgar Latin where the word meant something like ‘pustule, pock’. It was a plural diminutive wordform (varĭ-ŏl-a) derived from Lat. varĭus ‘various, mottled, speckled, variegated’ (văr‑ĭ‑us), itself derived from Lat. vărus ‘pustule, pimple, blotch, eruption on the face’ (văr‑us).

The Spanish term for the disease is viruela [bi.ˈɾu̯e.la], which descends from the Latin word varĭŏla, as do the names for the disease in other Romance languages, cf. Fr. variole, Cat. verola, It. vaiolo, Port. variola. The word viruela comes from an earlier veruela, which was a patrimonial descendant of Vulgar Lat. varĭŏla, reflecting the expected sound changes that patrimonial words undergo, such as the metathesis of the short ‑ĭ‑ following an ‑r‑ (intermediate step: vaĭrŏla), the de-diphthongization of the ‑aĭ‑ diphthong to ‑e‑,[1] and the diphthongization of the stressed Latin short ‑ŏ‑ to ‑ue‑. The additional raising of the ‑e‑ to ‑i‑ happened later and must be the result of the effect of the wau [u̯] in the following syllable (cf. Part I, Chapter 10).

In addition to being the name of the disease, ‘smallpox’, the word viruela can also mean ‘pockmark’, which was the word’s original meaning, as we saw, and it can even be used for marks or bumps that appear on flat surfaces, such as leaves. The phrase picado de viruelas translates as pockmarks. There is an old Spanish expression that contains this word, namely A la vejez, viruelas ‘In old age, smallpox’. It is used when an old person displays behaviors or attitudes that are more proper of younger people, especially of the person did not display those behaviors or attitudes at a younger age. It is used for example when an old person gets madly in love or has a love affair. The expression may come from the title of a 1825 play by Manuel Bretón de los Herreros about two old people in love, though it is also possible that the expression already existed prior to that.

Smallpox has been around for thousands of years, and it has been one of the most devastating of diseases for humans, with mortality reaching one third of the population during some outbreaks. By the 16th century, smallpox was well-established in Europe. Europeans brought smallpox to the Americas and it was one of the major diseases from the ‘Old World’ that devastated native American populations, including the Tainos, the Aztecs and the Incas. In some cases, the fatality rates were as high as 80-90%. Similar rates applied to the Native American populations in North America. In Europe too, smallpox was the leading cause of death until the 18th century, killing some 400 thousand people a year.

The smallpox vaccine was the first vaccine to be developed, in the late 18th century in Europe, though other cultures had their own methods of achieving smallpox inoculation. In Africa and China and perhaps other places as well, methods had been developed for people to acquire the variola minor form of the disease, resulting in immunization for variola major as well. The name variolation (Sp. variolación) has been used for all forms of ‘deliberate inoculation of an uninfected person with the smallpox virus (as by contact with pustular matter) that was widely practiced before the era of vaccination’ (WNTIU).

In Europe, modern inoculation started when Edward Jenner, an English physician and scientist, observed that milkmaids who had contracted cowpox, a very mild disease in humans, did not later catch smallpox. Thus, by exposing people to the virus Variolae vaccinae, literally ‘smallpox of the cow’ or ‘cow pox’, people became inoculated to smallpox. The word vaccīnae ‘of the cow’ from the name of this virus, genitive form of Lat. vaccīnus, derived from Lat. vacca ‘cow’ and the adjectival suffix ‑īn‑(us/a), gave the name to the smallpox inoculation, vaccine in French and English  (vacc‑īn‑us/a). Then, in 1881, Louis Pasteur proposed using the name vaccine for all types of inoculations in Jenner’s honor.

The adjectival form of the word for ‘cow’ in Spanish is vacuno/a ‘bovine, of a cow’, derived from vaca ‘cow’, as in ganado vacuno ‘(beef) cattle’. (In Argentina, the phrase ganado vacuno has been shortened to vacuno, so that vacuno is now used as a noun meaning ‘cattle’.) The word vacuno would seem to come from a variant of the Latin word vaccīnus, namely vaccūnus, for the ‑ūn‑ suffix was a variant of the ‑īn‑ suffix in Latin (vacc‑ūn‑us). It is from the feminine form of this adjective, vacuna, that comes the word for ‘vaccine’ in Spanish. Eng. vaccine and Sp. vacuna descend from the same Latinate root vacc‑a meaning ‘cow’ and have allomorphs of the same suffix, so they are technically cognates. From these nouns, English developed the verb vaccinate and Spanish the verb vacunar, which are also, technically speaking, cognates.
[1] In other words, the sound combination Lat. ‑ari‑ (followed by a vowel) always becomes Old Sp. ‑er‑ in patrimonial words, after having changed to ‑air‑ along the way (metathesis). This includes words with the suffix ‑ari‑(us/a), which becomes ‑er‑(o/a), such as primarius, which became primero. (In Portuguese, the Lat. ‑air‑ became ‑eir‑.)

Lat. vărĭus became vero in Old Spanish, which was homophonouns with vero ‘true’ from Lat. vērus ‘true’, which may have something to do with why it stopped being used and why the latter vero was changed to verdadero ‘true’, derived from verdad ‘truth’. The learned vario is an adjective almost exclusively used in the plural, with the meaning ‘different, diverse’ as well as ‘varied, assorted’ and (only in the plural) ‘some, several’.
[i] Source: https://commons.wikimedia.org/wiki/File:Child_with_Smallpox_Bangladesh.jpg (2008.05.08)