[This entry comes from Chapter 14, "Compañero & companion", of Part II of the open-source textbook Spanish-English Cognates: An Unconventional Introduction to Spanish Linguistics.]

The word compañero [kom.pa.ˈɲe.ɾo], fem. compañera, is learned early by students of Spanish, since it is a common Spanish word and in a school environment, it is necessary to refer to schoolmates and roommates. The noun compañero can translate as companion [kəm.ˈpʰæ.njən] in some contexts, as in compañero de viaje ‘travel companion’ (also ‘travel mate’). A companion is primarily ‘a person with whom one spends time or travels’ or ‘each of a pair of things intended to complement or match each other’ (COED). The word also has additional specialized meanings along the way, somoe of which are dated, such as ‘a member of the lowest grade of certain orders of knighthood’ (COED), and others are technical, such as in In astronomy, where a companion is ‘a star, galaxy, or other celestial object that is close to or associated with another’ (OAD). Thus, a companion star is ‘the fainter of the two stars that constitute a double star’ (RHWU), cf. Figure 119 (cf. Sp. estrella compañera).[1] 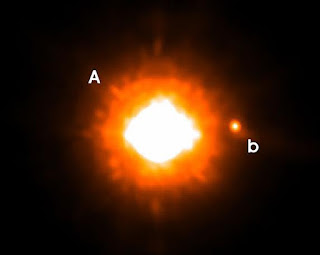 The pair Sp. compañero/a and Eng. companion are paronyms or semi-cognates, since they share a stem, but have different derivational endings (cf. Part I, Chapter 1, §1.3.3). It is easy to make the connection between the word compañero and the English words companion, company, and accompany in English, since they obviously share a stem. Sp. compañero, however, more commonly translates into English as partner or mate, especially in compounds such as compañero de cuarto ‘roommate’ or compañero de equipo ‘teammate’. In some contexts, compañero/a even translates as comrade, as in compañero de armas ‘comrade in arms’ (cf. comrade’s Spanish cognate camarada).

The words Sp. compañero and Eng. companion have analogs in other Romance languages, including French, of course, which is where English got the word companion from. They all share the Latin morphemes (word parts) com‑ ‘with’ and pan ‘bread’. Because of this, we might have expected these words to be derived from a Latin word. However, this word was not originally a Latin word. Rather, it was created in the early Middle Ages in early Romance languages by analogy with a Germanic word. Linguists call a word created that way a calque, or word translation, a coinage from patrimonial parts that mimics the structure of a word or a phrase in another language, that is, a part-for-part translations of another language’s expression (cf. Part I, §4.7).

All the words that contain the compan‑ stem are Romance calques of Germanic words such as Gothic gahlaiba, from hlaifs ‘bread’, a word that is a historical cognate of English loaf, and ga-, a prefix which indicates company or togetherness and is thus equivalent to the Latin prefix con-, which comes from the preposition cŭm ‘with’, from which comes Modern Spanish con. The Germanic analogy of Romance companion are not only found in Gothic. The same pattern is found in Old High German galeipo ‘mess-mate’. The concept of sharing bread among friends was an important one in Germanic culture, resulting in the word gahlaiba in Gothic, which meant something like ‘bread fellow’ or ‘mess mate’.

This phrase was then calqued into Late Vulgar Latin from where it was passed on to the Romance languages. Nowadays, however, the fact that all these words are related to the words for ‘with’ and ‘bread’ is probably totally opaque to any modern speaker of Spanish or French until this fact is pointed out to them.

The original derivational suffix for the construct that contained the stem compan‑ in Late Latin seems to have been the suffix ‑iōn‑ that derived nouns, typically from verbs (nominative ending: ‑iō, accusative ending: ‑iōn‑em). Admitedly, this was an odd choice of a derivational suffix, since the stem compan‑ is not a verbal one, but these where not Classical Latin times either. The result of this derivation in Old French was compa(i)gnon, from which English borrowed the word companion in the 13th century.. The descendant of this word in Modern French is compagnon [kɔ̃.pa.ˈɲɔ̃]. The shortened version of this word, copain [kɔ.ˈpɛ̃], feminine copine [kɔ.ˈpin], is actually more common.[2]

Although English is a Germanic language, did not have an equivalent of Gothic ghalaiba or Old High German galeipo. Instead, Old English had an equivalent word gefera, which meant ‘travel companion’, formed with the prefix ge, cognate of Gothic ga, and the verb faran ‘to go, fare’. After the word companion was borrowed from French in the 13th century, it eventually replaced the native word gefera.

In different varieties of Romance, different varieties of this Late Vulgar Latin word companion can be found. The one with ‑on ending from Lat. ‑iōn‑ is found mostly in what is now France. There was another version of this word in Old Spanish, namely compañon, a cognate of Eng. companion, with the ‑on ending. It came into Spanish from Frankish (northern French) influence. However, compañon became obsolete in Old Spanish, supposedly because it came to be used as a euphemism for a man’s testicles (a pair of inseparable companions) and, as is well known, euphemisms are often short-lived (cf. Part I, §6.4.2).

In other Romance dialects, the abstract ‑ĭ‑(um) ending was added instead to the stem compan‑, giving us Vulgar Lat. companium. It seems that this alternative may have been used originally with the meaning ‘body of warriors’. This is the source of another version of this word in Medieval Spanish, namely compaño [kom.ˈpa.ɲo], which eventually it came to be a synonym of compañon. From Vulgar Lat. companium also come Catalan company, pronounced [kom.ˈpaɲ], and Italian compagno, which is pronounced just like Old Spanish compaño.

There was yet a third derivational ending that this word could have in some Romance varieties, namely the one that gave us Sp. compañero. That is because the Spanish word compañero is not an exact cognate of French compagnon, or of Old Spanish compaño or compañon, but rather their paronym or semi-cognate, one that has the same meaning and the same stem, but not the same derivational endings (cf. Part I, Chapter 1). At some point a Romance version of the suffix Latin suffix ‑arĭ‑(us/a), which in Old Spanish was -er‑(o/a), was added to the original word compaño, resulting in compañero (compañ‑er‑o). The Latin suffix ‑arĭ‑(us/a) primarily turned nouns into adjectives adding the meaning ‘of, relating to, or connected with’, but these adjectives could later be turned into nouns as well. (The Spanish suffix ‑er‑o is still found in both adjectives and nouns.) The Latin suffix ‑arĭ‑ is also the source of the English suffix -ary, as in the revolutionary, which is both an adjective and a noun, derived from the noun revolution (cf. Sp. revolucionario/a).

The addition of this suffix is not restricted to Spanish, since other southwestern Romance varieties, in the Iberian Peninsula and southern France, also have cognates of Sp. compañero, e.g. Portuguese companheiro and Occitan companhier. Other Romance languages, however, such as the northern French dialect that English got the word companion from, have versions of the word that seem to derive from Late Latin compāniōn‑. As we just saw, Old Spanish too borrowed this word, compañon, which is attested in Old Spanish.

All of these Late Latin words calqued from Germanic replaced many of the uses of the Classical Latin word sŏcĭus, meaning ‘associate, companion, ally’. The only areas where this word was not replaced by derivate of the word companion are Romania, Southern Italy, and Sardinia. Of course, Modern Spanish has the word socio, but it is a learned word, brought back into Spanish at a later time (it is first attested in the 15th century). Its main meaning in business is ‘partner, associate’; in commerce, ‘shareholder’; and in an organizations such as clubs, ‘member’. In some dialects of Spanish, socio can be used colloquially to mean something like ‘mate’ or ‘pal’.

By the way, from the word sŏcĭus, Latin derived many other words which are still with us and which have given us many Spanish-English cognates, most of them learned words. From the adjectival suffix ‑āl‑, Latin derived the adjective sociālis (socĭ‑āl‑is), which is, of course, the source of English and Spanish social (Eng. [ˈsoʊ̯.ʃəl] and Sp. [so.ˈθi̯al]). Other common English and Spanish cognate words derived from the root sŏcĭ‑ are the following:
Going back to Sp. compañero, as we mentioned earlier, the word can be used in phrases that translate English compounds with the words mate, partner, or companion in them:

The plural compañeros can refer to a peer group. It can be used in phrases such as the following:


To conclude our survey of the word compañero, we should mention that there exist in Spanish shortened versions of this word that are used in colloquial speech, such as compa and compay, also meaning things like ‘buddy’, ‘mate’, or ‘pal’. According to the DLE, compa can be a colloquial short version of compañero, but also of compadre, in parts of the Americas in which compadre is synonymous of compañero and means ‘buddy, mate’ (the original meaning of the word is ‘godfather of one's child or father of one's godchild’ (OSD), which is still the only meaning in many dialects. The noun compay has the same meaning and is typical of Cuba and Venezuela.

We should also mention that according to some major US English dictionaries, the word compañero is also as an English word, borrowed from Spanish, used in the southwestern U.S. meaning ‘male companion, partner, buddy’. Dictionaries that contain this word include the Random House’s Webster’s Unabridged Dictionary and Webster's New Third International Unabridged Dictionary. The word is even written with the letter ñ. No other dictionaries, however, including the OED, seem to contain this word.

Finally we should mention a word derived from the word compañero in Spanish, namely compañerismo, formed with the suffix ‑ismo, which is cognate of English ‑ism. Its meaning is ‘companionship, fellowship, comradeship, collegiality, team spirit, etc.’ Two synonyms of the noun compañerismo are camadadería (cf. Eng. comradeship and camaraderie) and solidaridad (cf. Eng. solidarity).


[1] From the noun companion, a formal and rare verb to companion has been derived that is synonymous with the verb to acoompany (see below). There is even a second noun companion that is a nautical term that means ‘a covering over the hatchway leading to a companionway’ or ‘a companionway’ (COED), derived from the Dutch word kompanje ‘quarterdeck’.
[2] The letter combination or digraph gn is the way the sound [ɲ] (= ñ) is spelled in French. The ñ sound (the IPA symbol is [ɲ]) in the Spanish word compañero and the French word compagnon is due to a blend of the n and the semivocalic i before another vowel, in this case o. That is only one of the sources of the sound [ɲ] in French and Spanish. Another source is the Latin consonant cluster gn, which explains why this sound is spelled 〈gn〉 in French (cf. Part I, §7.11.2, §10.4.4.5).


[i] Source: https://commons.wikimedia.org/wiki/File:The_Sub-Stellar_Companion_to_GQ_Lupi.jpg, from the European Southern Observatory, https://www.eso.org/gallery/v/ESOPIA/Stars/phot-10a-05-fullres.jpg.html (obtained: 2018.05.24)

Email ThisBlogThis!Share to TwitterShare to FacebookShare to Pinterest
Labels: companion