[This entry is an excerpt from Chapter 22, "The calendar and the names of the months", of Part II of the open-source textbook Spanish-English Cognates: An Unconventional Introduction to Spanish Linguistics.]

Unlike the names of months 1-4 of the original ten-month Roman calendar, the names of months 5-10 had their names derived from numbers, all of which were indeclinable. The way the names were formed is different for months 5 and 6 than for months 7 through 10. We are going to look first at the names of months 5 and 6, which were both later renamed, unlike the months 7 through 10. The names of both of these months end in ‑tīlis, which shows that they are formed with the suffix ‑t‑, which had ceased to be productive by the Classical Latin period, which derived an ordinal number from a cardinal one, plus the derivational suffix ‑il‑ that formed adjectives. Adjectives formed with this suffix were third declension adjectives and thus they took the inflectional ending ‑is in the nominative case.[1]

The original name of this month was a Latin word that also meant ‘fifth’: quīntīlis /kʷiːn.ˈtiː.lis/, rarely seen with the added noun mēnsis next to it. Originally, the word was quīnctīlis, with a c that was dropped over time as a way to simplify the resulting complex syllable coda (‑nc‑). Lat. quīntīlis was an adjective derived from the ordinal number quīntus /ˈkʷiːn.tus/ ‘fifth’ (stem: quīnt‑). The ordinal number was most likely formed with the early Latin suffix ‑t‑: quīnqu-e + ‑t‑ > quinqu‑t‑us > quīnc‑t‑us > quīntus. Lat. quīntus is the source of Sp. quinto /ˈkin.to/ ‘fifth’, which was most likely a patrimonial word (cf. Part II, Chapter 20).[2] Thus Lat. quīnctīlis meant literally something like ‘the fifth (one)’.

In 45 BCE, the Romans made some major changes to their calendar (cf. §22.5 below). The new calendar is known as the Julian calendar, after Julius Caesar who, as we have seen, was at the time Pontifex Maximus and was in charge of the regulation of the calendar. One of the changes was to make the year have 365 days, with a leap year of 366 every four years. The change was made because until 46 BCE, the Roman solar calendar only had 354 days, resulting in a major lack of fit with the actual seasons. To solve such an imbalance, in earlier times, days were added to February every other year or a new month was occasionally added to the calendar (known as mensis intercalaris ‘intercalary month, leap month’, Sp. mes intercalar). The knowledge to come up with the 365-day number seems to have come from Egypt, even though Egypt did not become a Roman province until 30 BCE.

The month of quīntīlis was renamed shortly after these changes were made as iūlĭus /ˈjuː.li.us/ in honor of Julius Caesar (Lat. GAIVS IVLIVS CAESAR), who was born on that month. The ROman Senate made this name change in 44 BCE, right after the assassination of Julius Caesar that same year, at the urging of Mark Antony, one of the three members of the dictatorship that ruled over Rome after Caesar’s death (Lat. MARCVS ANTONIVS MARCI FILIVS MARCI NEPOS ‘Marcus Antonius, son of Marcus, grandson of Marcus’).

From this new name iūlĭus, we get our Eng. July and Sp. julio. Eng. July came partly from Latin word and partly through its Old French descendant, which was spelled in different ways at first in these two languages: juil, julie, juile, jule, julle. Eventually, Modern Standard French settled on juillet /ʒɥ̯i.ˈjɛ/ and Modern English is July /ʤu.ˈlaɪ̯/. Sp. junio, pronounced /ˈxu.ni̯o/ in Modern Spanish, is first attested in the late 12th century. Most other European languages and even non-European languages have also taken this name for this month: Portuguese julho, Italian luglio, Catalan juliol, Dutch and Swedish juli, German Juli, Greek Ιούλιος (Ioúlios), Russian июль (ijulʹ), and Arabic يوليو‏ (yūliyō). Basque did not borrow the name for this month either, which in Basque is called uztail lit. ‘harvest month’, from uzta ‘grain, harvest’ and hil ‘month’.

After the adoption of the Julian calendar (see above), this month was also renamed as augustus, after Caesar Augustus, Julius Caesar’s great-nephew, stepson, and heir, who was the founder of the Roman Empire and its first emperor and who ruled from 27 BCE to 14 CE (he was born GAIVS OCTAVIVS THVRINVS, and his full official empiral name was IMPERĀTOR CAESAR DĪVĪ FĪLIUS AUGUSTUS ‘Commander Caesar, Son of the Divine [Julius Caesar], the Venerable’). During his reign, the month known until then as sextilis was renamed augustus in his honor, in 8 BCE. (The reason that month was chosen to honor Augustus is that ‘several of the most significant events in his rise to power, culminating in the fall of Alexandria, had happened in that month’, OED.).[i] 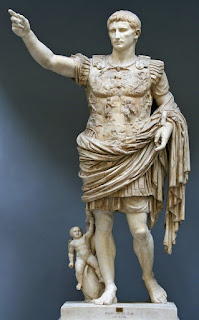 The word augustus was originally an appellation or naming given to the first emperor, an adjective that meant ‘majestic, august, venerable, worthy of honor’, typically used in religious contexts. It is derived from the verb augēre ‘to increase, enlarge, augment, nourish, strengthen’ and, derived from it ‘to magnify, to exalt, to extol, embellish, to praise’ (principal parts: present augĕo, present infinitive augēre perfect auxi, supine auctum). The word was probably related to the word augur, a seer, prophet or soothsayer in the Roman religion, and thus, probably, it originally meant something like ‘consecrated by the augurs’ or ‘with favorable auguries’ (cf. Chapter 43, §43.7.2.2)

From that name, we get our names for this month: Eng. August and Sp. agosto. The English version is attested in English in the 11th century, sometimes as a loanword from Latin and sometimes from French. Originally it is attested with different spellings: from fully Latinate august, to Anglo-Norman and Old French inspired augst, aoust, or aust. Eventually it replaced the Anglo-Saxon name for this month, Weodmonað ‘weed month’. The Spanish name agosto is obviously patrimonial, given the sound changes we observe, though one of them is not exactly what we would have expected. The change from short Latin ŭ to o is normal, but the Latin suffix au always changed to o in patrimonial words, not to a, and thus the initial a probably reflects an effort to make this word look more like the original.

English and Spanish have borrowed the Latin adjective augustus as Eng. august ~ Sp. augusto, meaning ‘inspiring respect and admiration’ (COED). Notice that Sp. augusto is borrowed from written Latin, whereas the name of the month, agosto, from the same source, is a patrimonial word that has undergone sound changes. This Eng. august, although written the same way as the name of the month, albeit with lower case, is also not pronounced the same way, since the stress is on the final syllable instead of the initial one: /ɔ.ˈɡʌst/ instead of /ˈɔ.ɡəst/. English borrowed the adjective august in the mid-17th century and Spanish borrowed augusto probably a century earlier.


Finally, we should mention that Latin had a name Augustīnus derived from the name Augustus. It was originally an adjective formed with the derivational suffix ‑īn‑ and meaning ‘of or pertaining to Augustus’.  In Medieval Latin, this name came a synonym of the adjective magnifĭcus ‘great, noble, eminent, august, etc.’ This, of course, was the name of famous Saint Augustine (Augustine of Hippo), also known as Saint Austin in English (Sp. San Agustín). This name is the source of English and Spanish first and last names. Austyn has been used as an English first name and Austin is also a not-uncommon last name (it was the last name of the ‘Father of Texas’ and the first secretary of state of the Republic of Texas, Stephen F. Austin). In Spanish, Agustín and its feminine form Agustina are common given names to this day.

[1] This suffix, which created adjectives, but sometimes also nouns, had two forms in Latin, one with short ĭ and the other with long ī: ‑ĭl‑ and ‑īl‑. A major difference, besides de vowel quality, is that if the vowel was long, that would be the stressed vowel of the word, whereas if it was short, the stress would fall on the preceding vowel. In early Latin the suffix was just ‑l‑ and that the ĭ was a linking vowel (cf. Part I, Chapter 8), but sometimes the ĭ became long ī in some contexts, such as when the preceding stem ended in ĭ in early Latin, i‑stems, such as cīvi-s and hosti-s. These are some Latin words containing this suffix and their English-Spanish cognates: (1) Lat. fossĭlis: Eng. fossil ~ Sp. fósil, (2) Lat. civīlis: Eng. civil ~ Sp. civil, (3) Lat. agilĭs: Eng. agile ~ Sp. ágil, (4) Lat. juvenīlis: Eng. juvenile ~ Sp. juvenil, (5) fertĭlis: Eng. fertile ~ fértil. Most of these Latinate words end in ‑ile in English, though some end in ‑il, as we have just seen, whereas in Spanish they always end in ‑il. As for the stressed syllable in these words, the English descendants do not always follow the Latin pattern, whereas the Spanish ones always do. The early tendency was that Eng. ‑ile from -īlis was pronounced /ˈaɪ̯l/ (with stress), and ‑il(e) from -ĭlis was pronounced [ɪl] (unstressed). Lately, the tendency has been to use /ˈaɪ̯l/, with some exceptions (OED).

[2] The Latin words for ‘five’ and ‘fifth’ were related, just like the analogous English words are. The word for ‘five’ was quīnque /ˈkʷiːn.kʷe/, from Proto-Indo-European *pénkʷe. Sp. cinco ‘five’ comes from the Vulgar Latin version of that word, namely *cīnque, by dissimilation of the initial qu (/kw/ to /k/). (The final ‑e changed to ‑o by analogy with other numbers than ended in a vowel, such as cuatro ‘four’ or ocho ‘eight’.)