The names of the months, Part 1: Introduction to the Roman calendar

[This entry is an excerpt from Chapter 22, "The calendar and the names of the months", of Part II of the open-source textbook Spanish-English Cognates: An Unconventional Introduction to Spanish Linguistics.]

Like so many of our institutions, the calendar that is used in the English- and Spanish-speaking worlds is derived from the Roman calendar. We saw this already when we looked at the names of the days of the week, even the fact that we have a seven-day week. This does not mean that the Romans invented the calendar outright, for they borrowed liberally from other cultures, but their calendar is the one that ours is built upon, including the names of the days of the week and of the months of the year. There has only been one change to the calendar since Roman times, the one introduced by Pope Gregory XIII in 1582 CE (see below).

Even the cognate words Eng. calendar /ˈkæl.ən.dəɹ/ and Sp. calendario /ka.len.ˈd̪a.ɾi̯o/ come from Lat. Kălendārĭum or călendārĭum, a word that meant ‘account book, debt book, money-lender’s book’. This word călendārĭum (călend-ār-ĭ-um) was derived from the noun kalendae ‘calends’ (kalend‑ae), which literally meant ‘the called’, referring to the first day of the month, which originally was the start of the moon cycle and the day that debts were paid. In other words, Lat. călendārĭum did not mean what it means today. By the time English borrowed the word calendar around the year 1200 from Old French calendier, a loanword from Latin, these words already had the meaning they have today, among other senses. Sp. calendario is also a borrowing from Latin, not a patrimonial word, and it is first attested around the year 1300.

The word kalendae is a plural nominative wordform whose singular form kalenda was actually never used. English and Spanish have both borrowed this word, but also in the plural, Eng. calends /ˈkæləndz/ ~ Sp. calendas, to refer to ‘the first day of the month in the ancient Roman calendar’ (COED). The calends were significant in part because monthly interest payments on loans were due on the calends in Roman times, as well as because of other significant events took place on or around those dates. It was often written with a k in Latin since it was a very early borrowing from Ancient Greek. The noun kalendae (root cal‑) is related to the verb calāre ‘to announce solemnly, call out’ and it referred to the priests’ calls and proclamations about the new moon (principal parts: calō, calāre, calāvī, calātum). This verb was also a loan from Ancient Greek κᾰλέειν ‎(kaléein), which was cognate with Lat. clāmāre ‘cry out, clamor, shout’, the source of Sp. llamar and Eng. claim (cf. Part II, Chapter 14). Both verbs go back to Proto-Indo-European root *kelh₁‑ ‘to call, summon’, which has left no direct descendants in English (Eng. call does not descend from that root).

It is interesting to note that the Romans did not number the days like we do, but rather spoke of the days with respect to three fixed dates within each month: the kalends, which as we just saw referred to the first day (of the following month), the nones, which was either the 5th or the 7th day of the month, and the ides, which was the 13th or the 15th day. Thus, for instance, April 23 was written IX Kal. Mai., which was read as ‘the 9th day before the Kalends of May’.

Similarly, we should note that numbers were not used to name the years, like we do now, but rather they were typically reckoned with respect to important years, such as the year of accession to power of an emperor or, before Rome became an empire, according to which two men were consuls that year. However, there was also a, less common, method of counting years from the presumed year of the founding of the City of Rome, 1 AUC (Lat. ab urbe condita ‘from the founding of the City’), which supposedly corresponds to 753 BCE.


The current custom of numbering the years after the presumed birth of Christ dates back from the year 525 CE, when Dionysius Exiguus, a Christian monk, proposed the new system and reckoned that year 1 was the year that Jesus was born, resulting in the era  Anno Domini ‘year of the Lord’ that we now follow. Dionysius had to guess the exact year that Jesus was born and it is widely believed that he got the year wrong.

The Roman calendar, from which we get ours, went through a great deal of tweaking over the centuries until they finally got it (almost) right under Julius Caesar in 46 BC, 708 years after the founding of Rome. The early Roman calendar was extremely complicated and underwent numerous modifications over those seven centuries.[i] The original calendar was not a solar calendar, but a lunar one, as was the norm 2,500 years ago. It had ten months, each with either 29 or 30 days, since the actual lunar cycle, the average time between full moons, was 29.5 days. The resulting calendar had 304 days, a couple of months short of the solar cycle, which is approximately 365.25 days long. 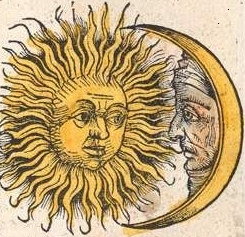 The word for month in Latin was mēnsis, the source of patrimonial Sp. mes. Several of the Latin names of months originated as adjectives in Latin, which would modify the noun mēnsis that meant ‘month’. This noun eventually was dropped from the phrase, a process known as ellipsis, giving us the Latin names for the months that we know today. Thus, for instance, mārtius mēnsis ‘Mars’s month’ as shortened to mārtius, the source of Eng. March ~ Sp. marzo (see the next section).

Lat. mēnsis is said to descend from the Proto-Indo-European noun *mḗh₁n̥s, which meant both ‘moon’ and ‘month’, and which is probably derived from the root *meh₁‑ ‘to measure’. This is likely due to the fact that the phases of the moon were one of the first things used by the ancients to measure time. Our calendar reckons time by the phases of the sun, not the moon, and thus our calendar is a solar calendar not a lunar calendar. Still, lunar calendars have not disappeared from the picture, as we shall see, and they are still used by some cultures.

Another word that descends from the same Proto-Indo-European root *mḗh₁n̥s is Eng. moon, which makes Eng. moon and Sp. mes ‘month’ cognates in the historical-patrimonial sense (cf. Part I, Chapter 1).

Eng. moon is cognate with (not a cognate of) the English word month /ˈmʌnθ/, for this latter word is derived from the original Proto-Indo-European root by addition of some suffix, no doubt so as to distinguish the two meanings, ‘moon’ and ‘month’, for which Proto-Indo-European used one and the same word. The Proto-Germanic word for month was *mēnōþs and the Old English descendant was mōnaþ. The words moon and month in English are not full cognates but only semi-cognates, since they share the stem, but not all the affixes. In other words, month was derived from moon, so to speak, at some point in Germanic by the addition of a suffix, one which is not recognizable as such today.

You may be wondering why the Latin word for moon, lūna, from which comes Spanish luna ‘moon’, looks nothing like the English word moon. That is because at some point in an ancestor language of Latin, the name of the moon was changed to lūna. This word is ultimately derived from the Proto-Indo-European root *lewk- ‘bright’. The Proto-Indo-European word that Lat. lūna comes from has been reconstructed as *lowksneh₂, which probably meant something like ‘the bright one’.

The calendar and keeping track of time was of enormous importance to the Romans, as well as to all ancient, agricultural peoples. The keeping of the calendar in Ancient Rome, which was more an art than a science, due to their limited knowledge of the earth cycles, was the job of the Pontifex Maximus, meaning ‘greatest pontiff’. The word pontifex (accusative wordform: pontĭfĭcem - pont‑ĭ‑fĭc‑em
) referred to the high priests of the Roman religion and it seems to be a compound word that seems to have meant ‘bridge-builder’, since it is derived from the root pont‑ (source of Sp. puente ‘bridge’) and the root of the verb facĕre ‘to do’ (source of Sp. hacer; cf. Chapter 36).[ii]

The office of Pontifex Maximus was the most important position in the Roman religion, for this man was the highest priest of the Collegium Pontificum ‘College of pontiffs or high priests’. Julius Caesar was the Pontifex Maximus from 63 BCE until his death in 44 BCE. After Rome became Christian, in the 4th century CE, the word pontifex came to be used for bishops in the Roman Catholic Church. Eventually it came to be used primarily to refer to the bishop of Rome, namely the pope. The Latin word pontifex has given us the cognates Eng. pontiff and Sp. pontífice, which are used to refer to the Roman Catholic pope, the highest priest of the Roman Catholic church. Since, at least in theory the term can also be used for any bishop, the term sumo pontífice is sometimes used when referring to the pope in Spanish (cf. Part II, Chapter 43). The derived adjectives are Eng. pontifical and Sp. pontificio/a.

In Table 164 below, you can see a summary of the names of the months in Latin as well as the reflexes of those names in English and Spanish, which are, of course, cognates. Notice that the names of the months are not capitalized in Spanish, just like the names of the days of the week are not either. (In this chart, we have added the macron, or mark for long vowels, but we have kept the Roman spelling 〈V〉 that represented the vowel [u], semivowel [u̯] and semiconsonant [w].)

Table 164: Names of the months in Latin, English, and Spanish