The names of the days of the week, Part 4: Sp. miércoles and related words

[This entry comes from a section of Chapter 20 ("The names of the days of the week") of Part II of the open-source textbook Spanish-English Cognates: An Unconventional Introduction to Spanish Linguistics.]


The word miércoles ‘Wednesday’, descends from the Latin phrase diēs mĕrcŭrī ‘day of Mercury’ by dropping of the diēs part. However, the change from mĕrcūrī to miércoles requires even more explaining than the word lunes did, for in addition to the analogical change of the final ‑s, there are a few more sound changes that need explaining, as we shall see.

This day of the week was consecrated in the Roman calendar to the god known as Mercurius in the nominative case wordform (mĕrcŭrĭŭs, /mɛɾ.ˈkʊ.ɾi.ʊs/). The name of the week diēs mĕrcŭrī was a calque of Ancient Greek ἡμέρᾱ Ἑρμοῦ (hēmérā Hermoû) ‘day of Hermes’.

Mercury was the son of the god Jupiter and the goddess Maia (Hermes was the son of Zeus and Maia, the corresponding gods in the Greek pantheon). The genitive or possessive form of this name was Mĕrcŭrī ‘of Mercury’ in earlier texts and Mĕrcŭriī in later ones (this is important, as we shall see) and the regular stem of the word was Mercuri‑. The stress was on the ŭ in Mercurius, in the antepenultimate syllable, since the penultimate syllable, rĭ, was light.

The name of this god is thought to contain the root merc‑ of Lat. merx ‘merchandise, commodity, goods’, a root that is found in words such as the cognates Eng. market ~ Sp. mercado and Eng. commerce ~ Sp. comercio, all ultimately derived from the noun merx. As for the suffix -urius, it may be of Etruscan origin (OED), for many of the Etruscan gods had such a suffix in their names. The root merc‑ may also be of Etruscan origin.

Mercurius is known as Mercury in English and as Mercurio in Spanish. He was originally the Roman god of commerce and travel. This god was most likely a calque or copy of an Etruscan god. When Rome came in closer contact with Greece in the 3rd century BCE, Mercury became associated with the Greek god Hermes and some of this god’s attributes were copied to Mercury, such as being messenger of the gods, mediator with the afterlife, patron of the arts, etc.

As usual, a planet was named after this god, namely ‘the smallest of the inner planets and the one nearest the sun’ (AHD). The reason for assigning that planet to this god is probably that, because of its smaller orbit, this planet changes position in the sky quite faster than other planets, as viewed from Earth, and fast motion was one of the attributes of the god Mercury, since he was the messenger god and the god of trade and travel. The god Mercury is depicted as wearing winged shoes, known as talaria, and a winged hat, known as petasos.[1] 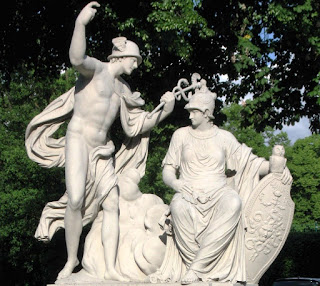 The final s must be an analogical addition, as in the case of lunes, for there is no other explanation. In other words, because the names of the other days of the week (martes, jueves, viernes) end in ‑s, a final ‑s was added to miércoles, by analogy, just as in the case of lunes. Again, this is not something that happened in Spanish, for this addition is already found in Latin inscriptions reflecting popular (Vulgar) Latin speech. But in the case of miércoles the analogy went further than in the case of lunes, for if the addition of the ‑s was all that was analogized, we would have expected the word for Wednesday to be miércolis, all other things being equal. That is because a Latin long ī always became i in Spanish. However, what we find here is an e preceding the s. In other words, what was analogized here were the two final sounds, not just one, that is, the ‑es ending found in the names of other days of the week: lunes, martes, jueves, viernes.

The only thing that we need to explain with regards to the last one of these changes is how come the Latin short ĕ happened to be stressed, for in the nominative form, it is the ŭ that is stressed, as we mentioned earlier. That is also where the stress goes in the regular genitive wordform Mĕrcŭriī (Mĕr.cŭ.ri.ī). However, in the irregular genitive form that collapses the last two syllables, Mĕrcŭrī (Mĕr.cŭ.rī), the stress gets shifted one syllable to the left, for Latin stress followed very regular and predictable rules. Basically, in Latin, stress was penultimate if the penultimate syllable was heavy (it had a long vowel or ended in a consonant) and antepenultimate if it was not (cf. Part I, Chapter 8, §8.3.3.4).

Finally, we need to explain the l in Spanish miércoles, for the Latin word has an r there instead. It turns out that it was very common for Latin words that had two r’s to undergo a dissimilatory change in Old Spanish. Sometimes, one of the r’s was dropped, as in the word orquesta ‘orchestra’, from Lat. orchēstra (from Gk. ὀρχήστρα ‘the area of the stage where the chorus danced’; cf. Eng. orchestra). Other times, the second r changed to l, as in this case. Another example of such a change is in the word Spanish árbol ‘tree’, which comes from Latin word arborem (with two r’s; nominative case: arbor) (cf. Part I, Chapter 10, §10.4.5).

Ever since the 14th century this Roman god’s name came to be used in Latin for the silvery, very toxic, metallic element that is liquid at room temperature, which we now know as Eng. mercury ~ Sp. mercurio. The reason for giving this liquid metal this name was presumably its slippery nature. Note that another name for this element in English is quicksilver, which comes from Old English cwicseolfor, which literally means ‘living silver’ (Old English cwic, the source of Mod.Eng. quick, meant ‘alive’, not ‘fast’ as it does now). This English name for the metal was a calque of Latin argentum vīvum. The Romans also called this liquid metal hydrargyrum, which was a loanword from Greek ὑδράργυρος (hydrargyros), a compound word meaning literally ‘water-silver’, from ὑδρ‑ (hydr-), the root of ὕδωρ (húdōr) ‘water’ and ἄργυρος (argyros) ‘silver’. This name is the source of the symbol Hg for this element used in chemistry (cf. Eng. hydrargyrum /haɪ̯.ˈdɹɑɹ.ʤəɹ.əm/).[2]

The word for Wednesday in other Romance languages also stems from the Latin phrase mĕrcŭrī dies. In French it is mercredi, in standard Italian, mercoledì (mèrcore in Venetian and mércuri in Sicilian), in Catalan dimecres, and in Galego and Old Portuguese mércores (in Modern Portuguese, the name is quarta-feira).

English Wednesday /ˈwɛnz.ˌdeɪ̯/ comes from Old English Wōdnesdæg (among other spellings), which meant literally ‘Wodan’s day’. Wōdnes is the genitive case wordform of the name Wodan, the name of a Germanic god. The name of this god in the North Germanic languages was Odin, cf. Old Norse Óðinn, from Proto-Germanic *Wod-enaz‑. In English, Odin is a loanword from Old Norse.

Wodan had a similar soul-guiding job in Germanic mythology as the Roman god Mercury. He was the messenger god and was associated with speed and trade. He was also in charge of guiding souls to the underworld, that is, the afterlife. Therefore, when translating or calquing the Roman system for naming the days of the week, Wodan was chosen as the equivalent of Mercury.


[1] Images of Mercury also often have him as well as carrying a caduceus, a herald’s wand or staff. Heralds were gods and others in Greek mythology who delivered messages, made proclamations known, or conducted negotiations. The caduceus is sometimes represented with two snakes wrapped around it and with wings. The caduceus is a symbol that goes back to Ancient Mesopotamia and it became symbol of commerce and negotiation since these two areas rely on balanced exchange and reciprocity. In North America, the caduceus is sometimes used as a symbol of medicine because of a confusion with the Rod of Asclepius, which only has one snake, has no wings, and is the traditional symbol for medicine. Sometimes Mercury and his Greek counterpart Hermes are also depicted with a lyre (Sp. lira), a musical instrument this god is supposed to have invented, out of a tortoise’s shell. According to Ancient Greek mythology, Hermes gave the lyre to Apollo, who in turn, gave him the caduceus.

[2] The ancients, going back to Babylon, recognized seven metals, which they associated with certain heavenly bodies (the ‘seven classical planets’) and to which they ascribed certain curative powers. They were also associated with certain days of the week, as well as certain colors, and certain foods. The metal-planet-day combinations were the following: Sun-gold-Sunday, Moon-silver-Monday, Mars-iron-Tuesday, Mercury-mercury-Wednesday, Jupiter-tin-Thursday, Venus-copper-Friday, and Saturn-lead-Saturday.