[This entry comes from a section of Chapter 32 ("Words about infectious diseases") of Part II of the open-source textbook Spanish-English Cognates: An Unconventional Introduction to Spanish Linguistics.]

Influenza is an infectious disease caused by an influenza virus, of which there are three major types or families: A, B, and C. Its popular name is the flu (not just flu), which is obviously a clipping of the word influenza. This infectious disease is unrelated to what is popularly known as stomach flu or 24-hour flu, which is known medically as gastroenteritis (Sp. gastroenteritis) and which is an ‘inflammation of the mucous membrane of the stomach and intestines’ (AHD).

The flu is a seasonal infectious disease that typically spreads through the air from coughs and sneezes. Every flu season is during the cold season in each hemisphere and thus there are two per year, one per hemisphere. During the season, several viral strains spread through the population. The seasonal nature of the flue is not fully understood, though some explanations have been proposed, such as the fact that people tend to stay indoors during the cold months, which promotes transmission.[i] In a normal year, it is estimated that between 3 and 5 million cases are serious and result in about half a million deaths worldwide.

The symptoms of this disease go from mild to severe, depending on the strain of the virus, on whether there are complications, and on the constitution of the person contracting it, with small children and old people typically being more susceptible. The typical symptoms of the flu are high fever, runny nose (rhinorrhea), sore throat, muscle pain (myalgia), headache, coughing, and tiredness.[ii] The early symptoms are very similar to those of the common cold, which helps explain the confusion in Spanish for terms for this illness (see below). 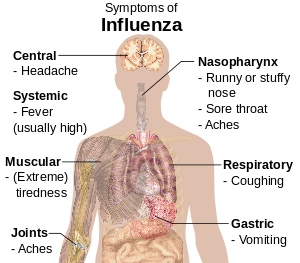 Figure 115: Symptoms of influenza, with fever and cough the most common symptoms [iii]

The influenza virus affects many animal populations and in particular, birds, but also pigs, horses and dogs. Strains of the virus in stressed animal populations may suffer mutations which makes them infectious to humans. A flu virus that comes from birds is known as avian influenza or bird flu (Sp. gripe aviar) and a flu virus that comes from pigs is known as swine flu (Sp. gripe porcina).

Sp. aviar is equivalent to Eng. avian. They both contain the root av‑ of Lat. avis ‘bird’ (av‑is). English created the word avian from this root and the Latinate suffix ‑ian in the 19th century so as to have a fancy, Latinate adjective for the noun bird. Spanish aviar is a learned adjective borrowed in the 16th century from the Latin adjective (masc.) aviārius ‘of birds’. This Latin word was formed from the root av‑, the adjectival derivational suffix ‑ār‑, and the linking vowel ‑i‑. a proper borrowing of this word would have given us *aviario, not aviar. Sp. aviar is thus cognate with Eng. aviary, ‘a large enclosure for keeping birds in’ (COED), which is a 16th century loan from Lat. aviarium, with the same meaning, a noun that is derived from the neuter form of the Latin adjective aviarius.

As for the adjective porcina of Sp. gripe porcina ‘swine flu’, it is a recent loanword from Lat. masculine porcīnus, feminine porcīna, meaning ‘of the pig, related to the pig’. This adjective is formed with the root pŏrc‑ of the Latin noun pŏrcus ‘pig’ and the adjectival suffix ‑īn‑ (the final ‑us is the masculine, nominative inflectional ending). Lat. pŏrcus is, of course, the source of the patrimonial Spanish word puerco ‘pig’ (a synonym of cerdo and marrano) and of En. pork ‘flesh of a pig for food’, a loanword from Old French porc ‘pig, swine, boar’.

Pandemics with particularly virulent strains of the virus occur approximately three times per century and they can kill tens of millions of people. The 1918-19 flu pandemic was particularly deadly. Estimates vary, but perhaps one fifth of the world population was infected and anywhere between 10-20% of those infected died (a normal flu epidemic kills around 0.1% of those infected or 1 in 1,000). In other words, around 3% of the world population died, somewhere around 50 million people at the time. In the US, close to 30% of the population was infected and more than half a million people died. This pandemic was nicknamed the Spanish Flu in English, though there is no evidence that the flu came from Spain or was any more virulent there than in other places.[1] One curious thing about this flu is that it affected particularly people aged 20-40, which is quite rare, since most of the time the flu is deadly for very young and very old people.

The flu has been particularly devastating for populations that did not have immunities for the flu virus in any of its forms. Thus, for instance, it is thought that it was probably the flu that killed as much as 25% of the population of the Caribbean islands in 1493, after the arrival of Columbus and his men. Other diseases, such as smallpox, were even more lethal, however.

The name influenza /ˌɪn.flʊ.'en.zə/ is an 18th century loanword from Italian influenza. The shortening of the name first to flue and then to flu /ˈflu/, is from the 19th century. This word is a cognate of Eng. influence, a word that was borrowed in the 13th century from Old French. These two words, along with Sp. influencia ‘influence’, come ultimately from Medieval Latin īnfluentia, which meant ‘influx, inflow or emanation from the stars that affects humans’, for at the time it was thought that stars affected people’s destinies and characters, for example (astrological influences). Originally all of the derived words in English, French and Spanish had that same meaning too. This Latin noun is derived from the Latin verb inflŭĕre ‘to flow in’. At some point and/or in some dialects, Spanish has also used the word influenza, also from Italian, for the flu or just for colds or infectious disease of the upper respiratory tract, though the word is not common.[2]


In Italian, influenza came to have a meaning derived from the original one since it came to be used to refer to diseases since the early 16th century, under the prevalent idea at the time that diseases and, in particular, epidemics were also brought upon people by the stars. The reason why English borrowed the word influenza from Italian is that in 1743 there was a major flu epidemic that spread through Europe from Italy (at a time when the English word influence did not have the old meaning any longer and, especially, it did not have the meaning related to diseases that its Italian cognate had acquired).[3]

The modern sense of Eng. influence and of Sp. influencia, namely ‘the capacity to have an effect on the character or behavior of someone or something, or the effect itself’ (COED), developed in the 16th century and eventually came to replace the meaning referring to the stars’ influence on humans. English turned the noun influence into a verb to influence. Spanish, on the other hand, borrowed the analogous verb influir from Latin in the 15th century, though it was rare until the 17th century. (Sp. fluir ‘to flow’, from Lat. flŭĕre, is first attested in the 17th century.)

The main Spanish name for influenza is gripe, which in some dialects, such as in Mexico and Colombia, has changed to gripa over time. This word has a cognate in English, namely the word grippe /ˈɡɹɪp/ (homophonous with Eng. grip), which is an archaic or old-fashioned word for influenza. Both Sp. gripe and Eng. grippe are loanwords from the French grippe for the disease. This name for the disease and the spread of that name seems to go back to another flu pandemic, this one from the late 18th century.


That much is clear about the source of the word grippe. What is not so clear is the origin of the French word. Some sources, such as the OED, say that it is derived from the verb gripper ‘to seize, grasp’ and thus it originally meant something like ‘seizure’. That word is of Frankish (Germanic) origin and it is thus a cognate of Eng. grip. (Sp. gripar, a loanword, means ‘to seize’, but it is only used for motors that seize up.)  Supposedly Fr. grippe came to be used as the name for this disease because of the gripping effect it had on the throat. Others, such as Corominas, prefer the theory that this word comes from Swiss German grüpi, with the same meaning, a word derived from grûpe(n) ‘to bend down, curl up’, ‘shiver’, and ‘to feel sick’. There is yet a third account of the origin of this word, which takes it back to Russian chirpu (Etymonline), though that is quite unlikely.

It is interesting how both English and Spanish have cognates of the two main words for ‘flu’, but that their use is so different. Whereas Eng. grippe is archaic, Sp. gripe/gripa is quite common. And vice versa: Eng. influenza and, particularly, its derived form flu, are quite common, whereas its Spanish cognate influenza is quite rare.


We should mention that in some Spanish-speaking countries, the word gripe, and perhaps in particular in Mexico the version gripa, has come to be used for many people for any infection of the upper respiratory tract. Thus this word in these dialects has come to have a very vague meaning, for it is used both for the common cold (equivalent to resfriado, resfrío, catarro, and constipado in different dialects; cf. §32.3.5 above) and the much more serious influenza. This is perhaps the reason that the word influenza has made it into Spanish, no doubt under the influence of Eng. influenza, so as to distinguish this serious disease from the other, much milder one.


[1] In Spanish, it is also known as la gripe española, as well as la gran gripe de 1918, among other names. The Spanish Flu started at the end of World War I (fall of 1918), a war in which Spain was neutral and perhaps because of this, news of this epidemic flowed more freely from this country than from those who were at war, which might have made it seem like it was particularly affected by it. On the other hand, recent studies have suggested that Madrid may have been one of the early foci of the pandemic, even if the disease did not originate there.

[2] The DLE says that Sp. influenza is a synonym of Sp. gripe. María Moliner’s dictionary defines Sp. influenza as ‘catarro o gripe, y, en general, enfermedad infecciosa de las vías respiratorias superiores’. This perpetuates the use of a word for both the flu and the common cold, which is not desirable. Since the word gripe is used for the common cold in some dialects (see below), Sp. influenza should at least be the one word that refers to what Eng. influenza refers to, not also the common cold.

[3] The English adjective fluent is related to this verb, which in some contexts is equivalent to Spanish fluido/a, but not when referring to how one speaks a non-native language, which is its most common use. The expression to be fluent in a language translates as hablar una lengua con soltura, dominar una lengua or, less commonly, hablar una lengua con fluidez. Prefixed forms of the Latin verb flŭĕre have given us the false friends Eng. affluent ‘rico, próspero’ ~ Sp. afluente ‘tributary (river)’, the cognates Eng. reflux ~ Sp. reflujo, Eng. superfluous ~ Sp. superfluo/a, as well as Sp. confluir ‘to converge, meet, come together’ and Sp. efluvio ‘emanation, flow’.